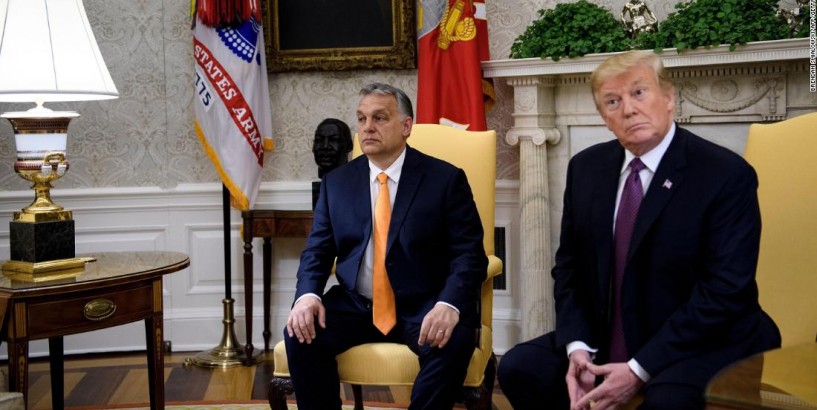 Hungary's veto effectively threw up a new obstacle to Ukraine's aspirations to build a closer relationship with the alliance. Officially, Hungary says such moves are about protecting the rights of ethnic Hungarians in Ukraine. "The expression 'veto' is very harsh," said Hungarian government spokesperson Zoltán Kovács . "Let's say instead that we recommend further consideration. The debate was about the situation in Ukraine, where the ethnic Hungarian minority suffers legal discrimination." Hungarian Prime Minister Viktor Orban and Russian President Vladimir Putin at a press conference in Budapest on October 30. A strident nationalist, Orban has often complained about the status of the Hungarian minority in western Ukraine. He has also cultivated a close relationship with Putin, and his government has frequently impeded Ukraine's overtures to the West, much to the Russian leader's satisfaction. Five years ago, Orban said that ethnic Hungarians in western Ukraine must be granted dual citizenship and the opportunity for autonomy. "Ukraine can be neither stable nor democratic if it does not give its minorities, including Hungarians, their due," Orban said. Read More It's a campaign he has returned to, even setting up a ministry to support the ethnic Hungarians in what his government calls Transcarpathia. Standing alongside Putin in February 2017, Orban said "the current discussions about the language of instruction in Ukraine are far from beneficial for the Hungarian minority." Under Ukrainian law, school instruction in sixth grade and above is solely in Ukrainian Washington Post: Putin and Hungarian Prime Minister disparaged Ukraine to Trump Such statements are music to Putin's ears. Putin has defended his support for separatists in eastern Ukraine by drawing parallels with Hungary, saying that his order allowing residents of the Donestk and Luhansk regions of Ukraine to apply for Russian passports was similar to Hungary's desire to grant passports to ethnic Hungarians abroad. Ukraine's language laws have also been a justification for Russia's support to separatists in Ukraine's Donbas region. Hungary's complaints even led then-US envoy to Ukraine Kurt Volker to visit Budapest in May. In an interview with Hungarian media , Volker was Quote: d as saying there were two fundamental principles: the right of national minorities to speak their own language, and the reasonable expectation that all citizens can use the national language. Volker urged the two governments to talk. Former US envoy to Ukraine Kurt Volker resigned in September. Volker resigned his role in late September, one day after the release of a whistleblower complaint expressing concern over a phone call in which US President Donald Trump asked Ukraine's President to investigate former Vice President Joe Biden and his son. A triumvirate? While Trump has often been disparaging about other European leaders, he's clearly an admirer of Viktor Orban. Trump's former political strategist Steve Bannon called Orban "Trump before Trump" at a Budapest conference in May 2018. Orban openly supported Trump's campaign in 2016. And Trump showered him with praise at a White House meeting this year , commending Orban's hardline immigration policies and saying Hungary was a "very good member of NATO." The two leaders bonded over their populist appeal. Sitting with Orban in the Oval Office, Trump said: "You have been great with respect to Christian communities. You have really put a block up and we appreciate that very much," an apparent reference to the border fence Hungary has built to keep out illegal migrants -- mostly from the Middle East. Trump told the assembled press: "[He's] respected all over Europe. Probably like me, [he's] a little bit controversial but that's OK. He's a tough man but he's done the right thing on immigration." Hungary's Prime Minister Viktor Orban and US President Donald Trump in the Oval Office in May. The Washington Post reported last month that both Putin and Orban had urged Trump to take a negative view of Ukraine. Just how much Ukraine was discussed at the White House meeting between Orban and Trump is unknown; it only lasted about an hour. But this much is clear: all three leaders have a negative view of Ukraine, if for differing reasons. Additionally, Orban's unremitting campaign against liberal billionaire George Soros -- the target of anti-Semitic attacks by Orban's Fidesz party at the last election -- sits well with some Trump surrogates who also see Soros as a bogeyman in Ukraine. Trump welcomes Hungary's far-right nationalist prime minister after past presidents shunned him Rudy Giuliani, Trump's personal lawyer, has claimed without evidence that Marie Yovanovitch, the ambassador to Ukraine who was recalled to Washington in May, had impeded his investigation in Ukraine, and has tied this baseless claim to a conspiracy theory involving funding from Soros . Russian officialdom has long cast Soros as a villain, claiming that his support for civil society in former communist countries is part of a US-led plot to promote regime change. Many foreign policy analysts have raised alarms about Trump's wholehearted endorsement of Orban, particularly given his relationship with Putin. Of greater particular concern is Orban's close relationship with Putin and Russia's International Investment Bank moving its headquarters to Budapest . Western intelligence sources have told CNN that Budapest has become a hub for Russian espionage in eastern Europe. Hungary had also rejected a US extradition request for two Russians wanted on weapons and drug trafficking charges, prompting the US State Department to say the decision "raises questions about Hungary's commitment to law enforcement cooperation." None of which appears to have dimmed Orban's appeal to President Trump. One month before he met President Trump at the White House in May, Orban gave a long interview to the Atlantic , in which he recognized Ukraine's geographical importance. "We must support Ukraine, since it is the main bulwark between us and the Russians," he said. "At the same time, we must not provoke Putin. And that is why I oppose the European Union's sanctions against him." All roads lead to Ukraine, it seems, in this current season of scandal.