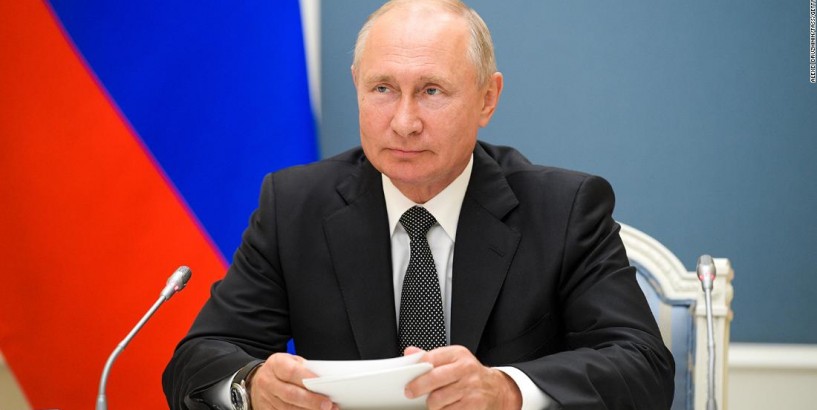 The new Cold War over vaccines is here - CNNPolitics

(CNN) Would you trust a vaccine if Vladimir Putin told you it was safe?

Follow-up question: Would Donald Trump trust a vaccine if Putin told him it was safe? This is not the space race, it's a worldwide pandemic. Putin is nevertheless trying to claim victory here. And while the US medical community has poured cold water on Trump's suggestions that a vaccine could be ready by Election Day, Putin has just pulled one out of a hat and named it Sputnik, after the satellite mission that shocked the world in 1957. Never underestimate the willingness of powerful people to engage in some geopolitical propaganda. That's why Putin sent PPE to New York this spring , even as the virus took hold in his own country. Russia's the country that reported very few cases of Covid, before the outbreak became impossible to deny. It's the country where doctors critical of the government's response fall out of windows . Read More Transparency concerns matter here Can you trust a Russian vaccine more than you can trust a Russian election result? The kind of electoral fraud that Trump frequently alleges, without evidence, happens in the US in fact does happen in Russia, according to democracy watchdogs. Putin and his interests are routinely supported by an unbelievable three quarters of voters. Three-quarters of Americans don't agree on much of anything. No American President has gotten much more than 60% of the popular vote ever, in the elections where that's been possible to track . Heck, in our weird system we routinely give the White House to the person who got fewer votes . And everybody goes along with it. Related: Russian democracy is a farce. Putin wants the same fate for America Trump likes to joke about continuing to serve as President long into the future, but to do it, he'd have to change the US Constitution, which seems completely impossible. Not for Putin. Voters helped him change Russia's constitution last month. During his time in office, Trump has shown great deference to Putin. That could stem from Trump's disdain for the US intelligence community assessment that Russia tried to help his campaign in 2016 (and is trying to help him win again in 2020). The White House also likes to say he's been hard on Russia, though there is ample evidence of Trump's willingness to let Putin play alpha. One example, of many, is his continued interest in bringing Putin back into the leadership group of industrial democracies. The G7 -- it used to be the G8 -- kicked Russia out after Putin invaded Crimea, which had been part of Ukraine, in 2014. Know what else the US intelligence community says Russia is doing? Last month the NSA, along with agencies from European countries, alleged Russians have been trying steal coronavirus vaccine research by hacking into computer systems . In Belarus, next to Russia, Putin has sparred with the longtime President, Alexander Lukashenko, who arrested Russian mercenaries who he said were trying to destabilize the country on the eve of their election. Lukashenko won, got congratulations from Putin, and is in the process of crushing dissident protests. CNN's Nathan Hodge dissected the Belarus results and explains why strongmen like them stick together. The vaccine race is a competition Russia's announcement of a vaccine, whether you can believe it or not, must irk Trump. Just last week Trump said, contra the evidence in Western medicine, that there could be a vaccine by Election Day. "I believe we'll have the vaccine before the end of the year, certainly, but around that date, yes. I think so," Trump said this past Thursday. The real timeline, hopefully. But actual medical experts told CNN's Elizabeth Cohen said that timeline is impossible. "There's no way. There's just no way," said Dr. Peter Hotez, a vaccinologist at Baylor College of Medicine and a CNN medical analyst. Read this to understand the timeline. Even if everything goes exactly according to plan, the earliest we're looking at is Inauguration Day. So late January. How did Russia do this so fast? Here's a key line from CNN's report on Putin's announcement of the vaccine. Critics say the country's push for a vaccine is partly due to political pressure from the Kremlin, which is keen to portray Russia as a global scientific force. Here's more: Russia has released no scientific data on its testing and CNN is unable to verify the vaccine's claimed safety or effectiveness. The New York Times reported the Russian vaccine had not completed trials . Despite this, Russian officials have told CNN that at least 20 countries and some US companies have expressed interest in the vaccine. Don't cut corners . If you're interested in why it's so important to do exhaustive trials vaccine development, it's because, in this case, billions of people will need to take the thing. Read this CDC website about historical vaccine problems . And note that China has also started using a vaccine on members of its military. In development. There are 25 vaccines currently in clinical trials and more than 100 more in development, according to the World Health Organization. Hopefully it's the safest one or ones of those that reaches billions of people worldwide and gets us all back to some kind of normal. Here's a look at the three you might have heard about . People in open societies need to trust the vaccine won't hurt them. They need to trust their elections are valid. They need to trust that government has their best interests in hand, and if not, they can take part in the process and put someone else in power.