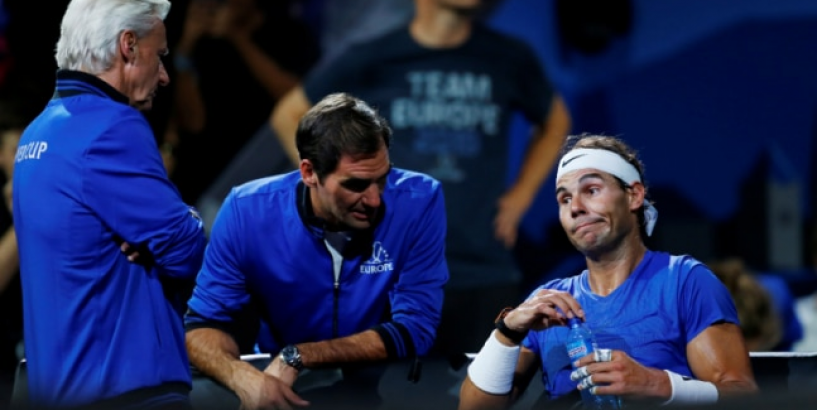 Roger Federer's coaching tips helped Rafael Nadal beat Milos Raonic (Reuters Photo) HIGHLIGHTS Federer and Nadal kept advising each other during their respective singles matches Federer maintained his unbeaten Laver Cup record against Nick Kyrgios, winning 6-7(5) 7-5 10-7 Nadal extended Europe's lead by beating Milos Raonic 6-3 7-6(1) in the night session The Laver Cup tennis tournament brings together two of the greatest athletes of all time - Roger Federer and Rafael - and it also gives a chance for the fans to witness them not just playing together and but even coaching one another, as it happened on Saturday.

Federer and Nadal, who have 39 Grand Slam singles titles between themselves, were seen advising each other during their respective singles matches against Team World with Team Europe captain Bjon Borg by their side.

A video of Federer advising Nadal on how to play against Milos Raonic has gone viral on social media. Federer and Nadal both won their singles matches against Nick Kyrgios and Raonic respectively.

"Spin, slice... you know, like in the old days!" @rogerfederer pays a visit to @RafaelNadal after he's broken, and his #TeamEurope teammate breaks right back. On serve in set two, 3-4 with Raonic serving. #LaverCup pic.twitter.com/pUSRCMcgmS

Laver Cup (@LaverCup) September 21, 2019 "All the players help each other. Roger and I have a good relationship and we know each other very well after playing so many times against each other," explained Nadal.

"So it's great to have him telling me things, as well as Bjorn, Thomas or any player really because sometimes things from outside are more clear than from inside. I am happy and lucky to be in such a great team."

Federer got his great rival's input at his shoulder before rallying late and raising his game in the decisive super-tiebreaker to beat Kyrgios 6-7 (5), 7-5, 10-7 in the afternoon session.

Nadal then got the favor back from Federer during a 6-3, 7-6 (1) win over Raonic that opened the evening session. He was quickly back on court partnering Stefanos Tsitsipas in the day's doubles rubber.

"What I really enjoy with Rafa is just that we very often align, our ideas align," said Federer, praising Nadal for "clarity in his advice."

Laver Cup (@LaverCup) September 21, 2019 Federer, who co-owns the Laver Cup competition, also praised the crowd support during the tournament which is being held in Geneva.

"Today was extremely loud. I don't recall that on the tour ever being almost this loud. You know, if I would have retired a long time ago, I wouldn't have this moment right now," the 38-year-old Federer said of the Palexpo indoor arena.

"I had goosebumps." @rogerfederer discusses his win over Nick Kyrgios, the crowd's impact on the match and how Rafa's coaching helped him on court. #LaverCup pic.twitter.com/VxkqaN7R2U

Laver Cup (@LaverCup) September 21, 2019 Nadal and his doubles partner Tsitsipas were beaten 6-4 3-6 10-6 by Kyrgios and Jack Sock in the final match of the day as Team World narrowed Europe's lead to 7-5.

The first team to reach 13 points will be crowned champions, with each win worth three points on Sunday.