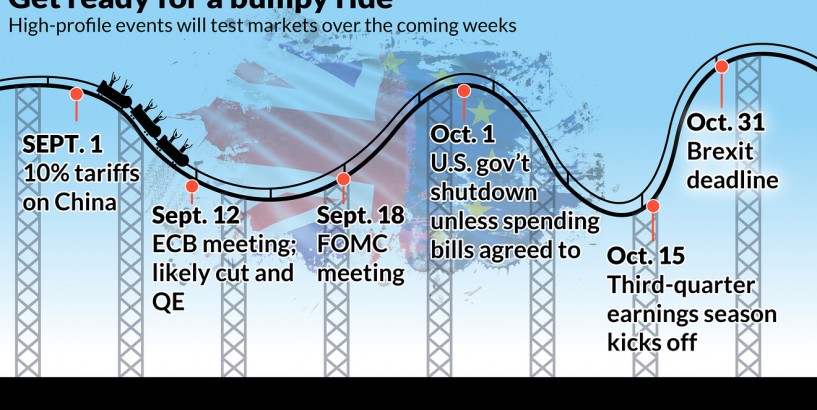 Markets are gearing up for more volatility Are you tired of being told to fasten your seat belt? The next few weeks are chock-full of big events that could spell heartburn for global financial markets. Investors will need a strong stomach to get through international trade disputes, Britain’s march toward Brexit, and more.

But here’s a surprise: things just might start to look a little brighter as the autumn rolls on. The U.S. economy is holding up so far, central banks around the world are cutting interest rates, and even the manufacturing sector may recover.

To be sure, there are headwinds ahead, including the U.S.-China war over import tariffs that rattled stocks recently. But it is wise to stay invested, multiple sources tell MarketWatch. Grab the Dramamine, avoid the headlines, and get used to it.

“I wouldn’t be surprised if the second half of the year isn’t characterized by a very, very powerful combination of very loose monetary policy and accelerating growth,” Peter Berezin, chief strategist at BCA Research said. “Central banks are usually reacting to yesterday’s news and monetary policy comes with a lag. That is just a wonderful environment for stocks.”

Berezin and others are optimistic for a lot of reasons, most notably that the U.S. economic expansion still seems to have life in it even after 10 years.

The economy is likely to continue growing at a 2% or higher pace over at least the next 18 months, said Dec Mullarkey, managing director of investment strategy at SLC Management, in an interview with MarketWatch. That should support markets and keep debt in the consumer and corporate sectors manageable.

“The consumer has been a pillar of this economy and has acted sensibly in the debt it has added and spending it has executed,” Mullarkey said.

U.S. consumer debt hit $14 trillion in the first quarter, but low interest rates have helped keep defaults at the low end of historical levels. However, July did see a 5% increase in consumer and business bankruptcy filings from the prior month, with many of those taking place in southern U.S. states.

But there are uber-bulls about, including Fundstrat’s Tom Lee who sees several indicators that stocks will race higher.

This chart also shows that while U.S. manufacturing activity in July edged down closer to the neutral 50-mark on the index that divides expansion from contraction, growth in the U.S. still has been positive, per data from the Institute for Supply Management.

Oxford Economics Manufacturing still slightly on the growth side As Berezin sees it, the manufacturing slowdown that began in 2018 is running its course. “As long as the trade war doesn’t ratchet up, we’ll see a rebound in manufacturing activity soon,” he predicted. In fact, while third-quarter earnings may not be strong, corporate guidance for the fourth quarter and beyond may be bullish, he suggested.

Even so, international trade disputes remain the wild card for it all.

“If trade tensions continue to escalate and Trump follows through with the 10% tariffs on $300 billion of additional Chinese imports beginning September 1, the economy’s growth engine is likely to downshift considerably,” warned Oxford Economics’ senior economist Bob Schwarz, in a note Friday.

“Either importers would have to absorb the higher tariffs and accept lower profits, which is unlikely, or pass them on to consumers, which would crimp demand.”

Trade policy jitters helped drag stocks lower on Friday, after President Trump told reporters that he was considering canceling September talks with China, causing a sharp pullback, followed by a paring of losses in afternoon trade.

All told, U.S. stocks are still less than 5% off record highs following Friday’s tumult, which left the Dow Jones Industrial Average DJIA, -0.34% , the S&P 500 index SPX, -0.66% , as well as the Nasdaq Composite Index COMP, -1.00% with a second straight week of losses, according to Dow Jones data.

“There is no question that the tensions on trade are having an impact globally,” Mullarkey said. It is “the biggest question hanging over markets.” All bets are off if the trade war bubbles over to into the corporate sector to the point where U.S. companies pull back on hiring, he said.

Meanwhile, global political uncertainty, including the looming threat of a no-deal Brexit on Oct. 31 that would immediately divorce the U.K. from the European Union, is making it harder to predict where markets might be headed, said Marco Pirondini, Amundi Pioneer’s head of equities.

“There are so many things that can have a meaningful impact,” Pirondini told Marketwatch, adding that he thinks markets could use a dose of caution.

“I think a little bit of a correction would be probably healthy for the market, just to be better prepared if earnings don’t prove to be as strong in the last part of the year,” he said.

On the other hand, Michael Englund, chief economist of Action Economics, sees the economy doing much better than the current market tone would indicate, and expects a big uptick in third-quarter GDP growth, although that won’t be confirmed until October 30.

As Englund sees it, some aspects of the trade conflict are simply about optics, namely the desire of the U.S. administration “to keep the U.S.-China trade conflict in the news, with story lines oscillating between ‘Trump is being tough’ and ‘Trump is getting concessions’.”