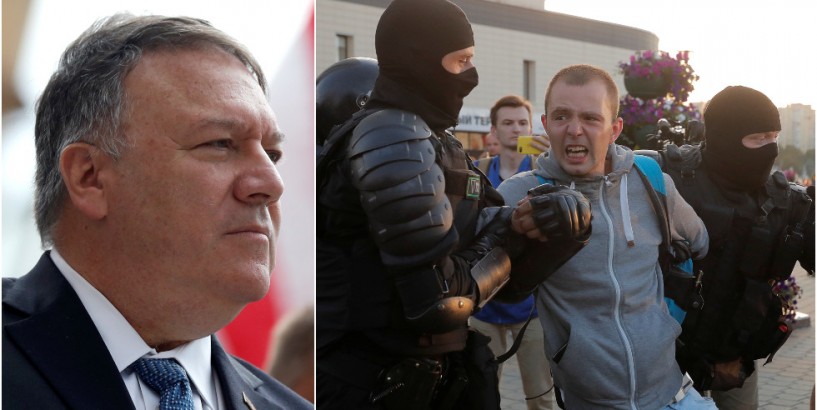 Asked how Washington would respond to the opposition crackdown during an interview with Radio Free Europe on Wednesday, Pompeo said that both sanctions and trade penalties were on the table, suggesting the US could also halt oil shipments to the east European nation.

“What is it that we believe that we can do, not just the United States unilaterally, but in a multilateral way to deliver good outcomes for the Belarusian people, whether that turns out to be sanctions or turns out to be making decisions about product deliveries?” Pompeo asked rhetorically, adding that he was “deeply disappointed” by the election and its violent aftermath.

Those are all things that are yet to be determined. We’re still pretty fresh off this election and we need to see how things settle out here in the near future.

Also on rt.com Tensions fly high in post-election Belarus amid reports of police firing at apartment windows & officers being run over (VIDEO) The country’s August 9 presidential election has kicked off a wave of unrest among the political opposition, who insist that incumbent Alexander Lukashenko’s landslide victory was rigged, keeping him in office for his sixth consecutive term since 1994. Some four days after the contentious race, mass protests continued to engulf the capital of Minsk and other cities, seeing violent clashes between demonstrators and security forces, who have made more than 6,000 arrests in that time.

Though Washington has imposed and removed sanctions on Minsk intermittently over the last decade – last scaling back penalties in 2015 after Lukashenko freed a number of political prisoners – relations between the two countries have improved in recent years, with the US making at least one major oil shipment to Belarus since May. That may change following Pompeo’s remarks, however, in which he also said the US would attempt to lean on its “European friends” to join the effort to punish the Lukashenko government. Other countries in the region have already signalled willingness to pursue that goal, with Poland, Latvia and Lithuania threatening to impose sanctions of their own unless they are permitted to mediate talks between the state and the opposition.

Also on rt.com Lithuania, Latvia & Poland’s ULTIMATUM to Belarus: Let us mediate election talks betw. Lukashenko & opposition, or face SANCTIONS Like this story? Share it with a friend!