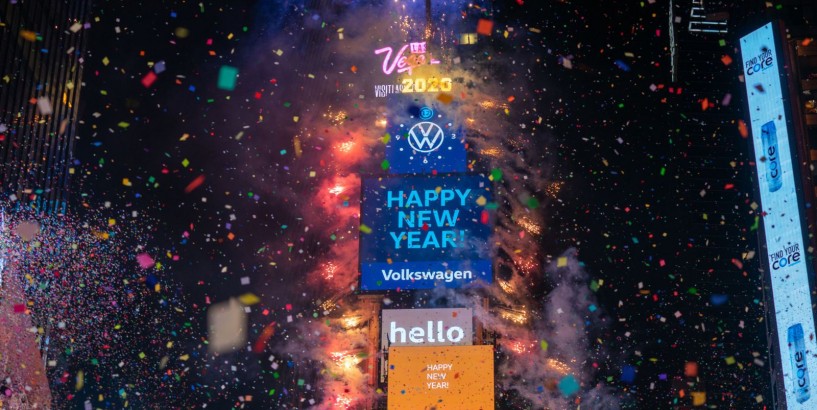 New Year 2020: Glitter balls and silent fireworks - how the rest of the world celebrated | World

There was a strong turnout at Brazil's Copacabana beach come midnight - with three million people watching a 14-minute extravaganza boasting 15,422kg of fireworks.

Music, drinks and religious rituals were held on the shore, with many following tradition and dressing in white - symbolising their hope for peace.

Many are set to stay on the beach until sunrise, when they will take their first dip of 2020 in the ocean and wash away their troubles from the year before.

Over in Sao Paulo, almost all of the fireworks set off were silent so pets wouldn't be bothered by the noise.

Berlin Image: There were plenty of fireworks in Berlin - but this wasn't the case in some German cities

Celebrations in Germany's capital centred on the Brandenburg Gate.

In other cities, such as Munich and Hamburg, citizens were actually banned from having their own private firework displays amid concerns about the environment.

Paris Image: Parisians fought their way into the city centre to enjoy the New Year fireworks

Crippling transport strikes didn't dent the party spirit in France, with upbeat Parisians using their bikes and scooters to head down to the Champs-Elysee for a firework display.

Security was tight, with police setting up a perimeter around the Champs-Elysee. Traffic restrictions were also in force, and alcohol was banned.

Not one, not two, but seven different fireworks displays were taking place across Dubai - with hundreds of thousands gathering at the 828m (2,716ft) tall Burj Khalifa, the world's tallest building, to mark 2020's arrival.

Dubai is especially popular with tourists from Europe and Russia at this time of year as they try to escape the cold, dark winter.

In an attempt to keep the massive crowds safe, police set up walkways around the Burj Khalifa for male-only groups - separating them from families and women.

Not everyone was blessed with good weather, unfortunately. In Indonesia's capital, torrential rains dampened the spirits of tens of thousands of revellers as they waited for fireworks.

Events in other areas were also affected by fears that Anak Krakatau, an active volcano, may be about to have a large eruption.

The New Year celebrations were overshadowed by recent protests, with thousands of people breaking out into pro-democracy chants shortly after midnight.

There were no fireworks this year on the neon-lit promenades of Victoria Harbour for the first time in a decade, with officials citing security concerns.

Instead, there was a light show starring the city's tallest skyscrapers - with small-scale pyrotechnics launched from rooftops along the waterfront.

Tokyo Image: Quirky mascots were out in force for celebrations in Tokyo

This is the most important holiday in Japan - with stalls selling sweet rice wine, fried noodles and candied apples to hungry partygoers.

It's going to be a big year for the country, with all eyes on Tokyo as it prepares to host the Olympics in the summer.

It may be the capital of an isolated state, but Pyongyang remained determined to welcome in a new decade in style.

Fireworks lit up the North Korean city as 2020 began. Over in neighbouring South Korea, a traditional bell-tolling ceremony took place on the cold streets of Seoul.

Celebrations in Australia were clouded by the recent deadly wildfires across the country, with officials in Sydney deciding to press ahead with their multimillion-dollar display.

There had been calls for the event to be cancelled in solidarity with fire-hit areas of New South Wales, but the city's mayor said planning had begun 15 months ago, the event had already been paid for, and it would give a boost to the economy.

Elsewhere in Australia, several towns in the east cancelled their celebrations altogether as naval vessels and military helicopters helped firefighters rescue those fleeing the fires.

Among the first to celebrate the New Year were cities in New Zealand - some 13 hours before London.

After a challenging year, a dramatic pyrotechnic display in Auckland - featuring half a tonne of fireworks - gave thousands of people a well-deserved opportunity to get into the party spirit. More stories