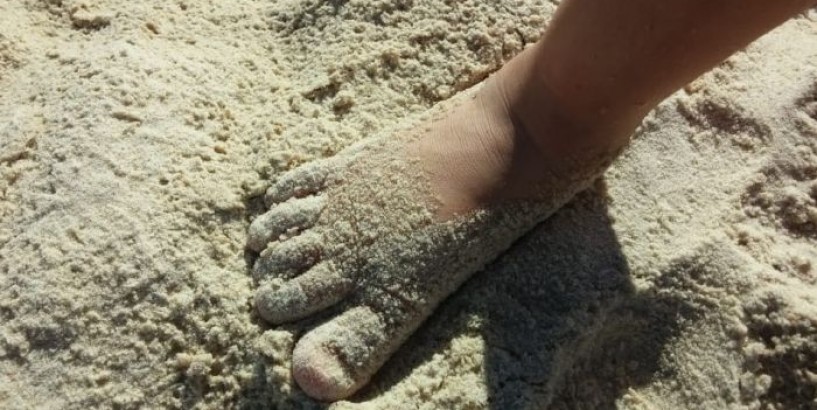 For information on the fires in Queensland check the Rural Fire Service's incident map. For all the latest on the fires in New South Wales, check the NSW RFS website . Neanderthal children's footprints offer rare snapshot of Stone Age family life Share One of 257 fossilised footprints discovered in Normandy, France. (Supplied: Dominique Cliquet)

One of 257 fossilised footprints discovered in Normandy, France.

Their faces are lost to time, but their presence can still be felt. A group of Neanderthal children walked on a sand dune 80,000 years ago — and now their footprints have been uncovered in France. Key points Archaeologists analysed hundreds of fossilised footprints The footprints belonged to a group with a high number of children and few adults The discovery provides a rare glimpse into the social structure of Neanderthal families

A team of archaeologists analysed 257 footprints discovered at Le Rozel on the coast of Normandy.

They found the footprints belong to a group of between 10 and 14 individuals, most of whom were children including a two-year-old, they report today in the journal Proceedings of the National Academy of Sciences .

"It was incredible to observe these tracks, which represent moments in the lives of individuals, sometimes very young, who lived 80,000 years ago," said Jérémy Duveau of the French National Museum of Natural History.

Created under just the right conditions, these snapshots in time are incredibly rare.

Footprints made by ancient or modern humans have only been found at 36 locations including Australia. But Neanderthal footprints, in particular, are very scarce.

"Only nine footprints were known at four different sites until now," Dr Duveau said. Archaeologists have been excavating fossilised footsteps at Le Rozel in France since 2012. (Supplied: Dominque Cliquet)

Archaeologists have been excavating fossilised footsteps at Le Rozel in France since 2012.

The discovery of so many footprints in one place could shed light on the age and composition of Neanderthal groups.

"These footprints were covered very quickly by the sand, so … they were probably made by a single group," Dr Duveau explained. How do we know they're Neanderthal?

The footprints were made on a sand dune a couple of kilometres from the sea around 35,000 years before our species — Homo sapiens — is thought to have arrived in this part of Europe.

Although no skeletal remains have been found at the Le Rozel site, Dr Duveau said the shape of the footprints was consistent with what we know about the anatomy of Neanderthals, gleaned from remains found at other sites.

"They are relatively broader, especially in the midfoot, than the footprints made by Homo sapiens, which corresponds to a more robust foot and a less pronounced arch," he said. The broad mid part of the foot and flat arch matches what we know about Neanderthal anatomy. (Supplied: Dominique Cliquet)

The broad mid part of the foot and flat arch matches what we know about Neanderthal anatomy.

The footprints were also found alongside many flaked stone tools crafted using the distinctive Mousterian style that has been associated with Neanderthals.

Fossilised footprints are very special, said Steve Webb, an Australian paleoanthropologist at Bond University, who was not involved in the discovery.

"The great thing about footprints is you're actually seeing a person.

"This is flesh and blood. It's tissue and muscle. It's like a real thing."

Bone discoveries were "good", he said, while stone tools were "alright".

"But footprints are very important," said Dr Webb, who studied the tracks of humans who lived 20,000 years ago at Willandra Lakes in New South Wales.

To work out who was in the group, the researchers measured the best-preserved footprints and worked out a size-to-height ratio, as well as measuring the depth of the imprints.

They compared the footprints to 3D models of ancient and modern human footprints from other sites, as well as those from an experiment with local people of different ages walking barefoot on sand.

Most of the Neanderthal group was less than 130 centimetrestall, but at 175cm one individual stood head and shoulders above the rest. Footsteps found at Le Rozel show a much younger family group than depicted in this 1920 painting by Charles R Knight. (Wikimedia Commons)

Footsteps found at Le Rozel show a much younger family group than depicted in this 1920 painting by Charles R Knight.

The average height of an adult Neanderthal is thought to have been about 147.5cm.

"They were a short, stocky, very powerful people — and tough as nails." What does this tell us about Neanderthal families?

"The glimpse we see at Le Rozel is fascinating," Dr Wood said.

"This is quite different to the few other sites where individual Neanderthal groups are seen."

The most detailed information about Neanderthals in the fossil record comes from the skeletons of 13 people who died together 49,000 years ago in the El Sidron cave in Spain.

While around half the El Sidron Neanderthal family were adults, around 90 per cent of the Le Rozel group were children or teenagers. ABC Science Facebook teaser

Want even more science, health and tech? Join the conversation on Facebook.

Palaeoanthropologist Erik Trinkaus of Washington University said the large number of young people suggests this group was thriving even at the northern limits of their territory.

"[It] goes against the idea of the Neanderthals as barely eking it out in the frozen wastes of glacial Europe, and rather portrays them as well surviving people that even took time out on the beach," said Dr Trinkaus, who reviewed the research.

Michelle Langley, an archaeologist at Griffith University, said it was not unusual to have a high number of children in a group, although you'd expect to see a couple more adults.

"You usually get 40 to 50 per cent of children in a group, but you don't usually get this kind of information from an 80,000-year-old site," said Dr Langley, who studies hunter gatherer societies and children from the deep past.

"It shows us they are probably doing similar things to what modern humans do in terms of the social structure where you have more kids than adults."

It was still possible, she said, that there may have been other adults in the group whose footprints were not fossilised.

We also don't know that much about the roles of older children in Neanderthal society.

"We don't know at what age [Neanderthals] considered girls and boys to be adults," she said, adding that it is thought that Neanderthals were mature by the time they were 15.

While the footprints were discovered alongside handprints, stone tools, animal remains and paw prints, it is unclear exactly what the group was doing at the time. Just like human toddlers, Neanderthal children may have also loved spending time at the beach. (Peakpx)