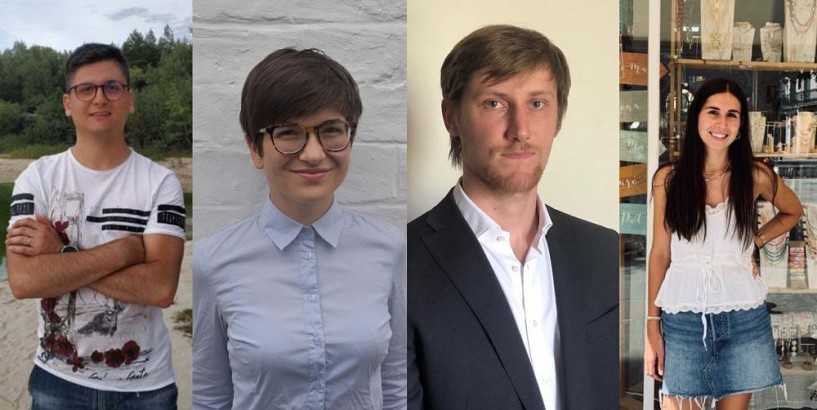 Europe's class of 2020 are an unlucky bunch, with cancelled graduations, final exams turned on their heads, and end-of-year parties scrapped because of the coronavirus pandemic.

But the tough times don't seem to have ended for many university graduates when they submitted their final assignments, with the search for their first job compounded by the economic crisis.

Young people in the EU appear to have been hit the hardest by the economic nosedive, with citizens aged 15-24 accounting for 40 per cent of all job losses in the bloc, according to Eurostat.

Swathes of new graduates are pouring into the already-straining job market, while companies react to the COVID-19 crisis by freezing or delaying recruitment.

Graduates in southern European countries, including Italy and Greece, have suffered the hardest blow as these national economies rely heavily on badly-affected sectors like tourism.

Recruitment website Indeed reported that the number of new vacancies posted in Spain and France had halved in May compared to the previous year.

Euronews spoke to five recent graduates to see how their search to get a step on the ladder was going.

Lucia Posteraro from Calabria, Italy, has decided to apply for positions outside the UK in her search for post-graduate employment. Lucia Posteraro A recent University of Glasgow graduate, Lucia estimated she has applied for 90 jobs in international politics over the last four months.

She had decided to take a year off before beginning a master's degree to get some work experience through internships but once the coronavirus crisis spread to Europe, it became clear that there would be long delays in recruitment processes.

She said some companies don't acknowledge her applications, which has made the process "more stressful than ever".

In one case where she was unsuccessful, a London-based firm said 900 people applied for a position.

"I feel like I'm fighting a battle against my own kind," she explained, with competition for jobs so high.

An Italian national living in the UK, her search has been compounded by Brexit, which has added to the uncertainty surrounding her future in the country.

Despite having pre-settled status, Lucia has decided to cast her net outside Scotland in case "things turn nasty" in the final stages of the UK's withdrawal from the EU.

Despite setbacks, the recent graduate remains determined: "I'm young, I'm stubborn, and I'm not going to stop applying," she said, adding that she is "willing to compromise" to secure an opportunity.

Domenico from Italy 'didn't have a problem finding a job' in Poland. Domenico Siciliani Despite the economic downturn caused by the pandemic, some industries are growing, including the technology sector as businesses and individuals look to machines to bridge gaps created by the coronavirus pandemic.

Domenico, a former computer science student, graduated in June. Originally from Bari in Italy, he just moved to Poland to be with his fiancé

"I didn't have a problem finding a job, the same goes for my colleagues. I received calls and job offers from all over Italy," he said.

When the new graduate decided to move to Poland, he was hired by an international bank.

"I believe COVID-19 didn't have any impact in the computer sector," he said. "On the contrary, it is now an advantage for us (IT graduates) as many firms need more technical support because of remote working. So in our sector things are getting better."

After completing his law degree in April, Thomas wanted to work in the law department of a private firm, but it was "absolutely impossible for me to enter the job market," he said.

He instead opted to sign up for a masters in Trieste, where he studied, although he admits this was not his first choice for his next step.

"I lost count of the CVs I sent, but I received less than five replies. There are no opportunities, everything is blocked," Thomas added.

"The few job openings out there are extremely selective: on top of this, they list impossible requirements for recent graduates."

While he acknowledges it can take longer than average to find employment in the Law sector, he believes there were at least a few opportunities to land internships or work experience, but "nowadays, it's just impossible".

A nursery school teacher, Goretti, from near Barcelona, finished university in June and wants to start working in public education.

She was hoping to get some experience through a government scheme that allows new graduates to work as substitute teachers — this also gives them points towards getting a public sector job.

However, this year there were no places available on the programme so she will try her look with an entrance exam.

The kindergarten teacher has sent her curriculum to private schools. "If you know someone, entering a private school is always easier," says Goretti, for whom this is not the case.

Before finishing her degree, she secured a part-time job in a jewellery shop, where she will continue to work until she gets a teaching position.