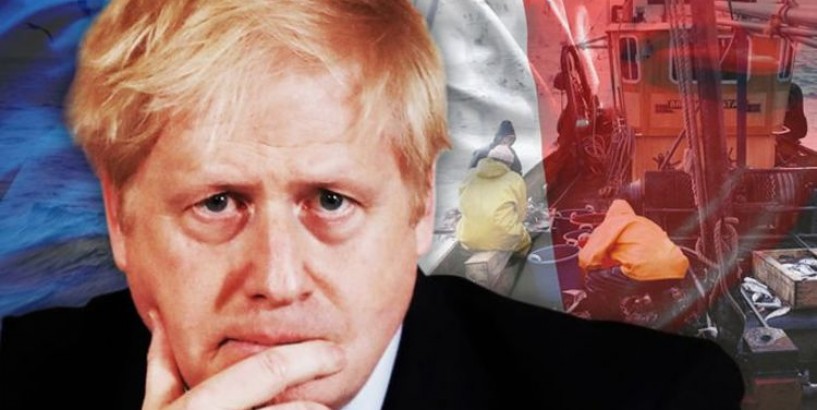 By UN convention the UK has an area of fishing waters stretching up to 200 miles away from its shores. However, under the Common Fisheries Policy (CFP) launched in 1983, all EU countries have access to everyone else's waters. Currently, over 60 percent of the fish caught in UK waters are caught by boats from overseas.

Related articles French fisherman’s threat to HANG British naval officer Gibraltar fury: How UK ‘went soft’ on illegal Spanish fishing Boris Johnson has promised to take back UK waters for British fishermen, and while this would be a huge boost of the industry, it could mean a return to the endless disputes of the past.

For example, in the Sixties and Seventies, relations between the UK and France were tested by repeated illegal fishing in UK waters by French vessels.

Between 1964 and 1972, 37 French fishing vessels were detained and brought into UK ports, 36 of whom were charged and convicted of illegal fishing in British waters.

In 1972, Edward Heath’s government had just agreed for the UK to enter the EEC, but tensions over fishing had reached boiling point.

Boris Johnson has an opportunity to reclaim British waters for the UK fishing industry (Image: GETTY)

Edward Heath was Prime Minister at the time (Image: GETTY) Documents unearthed in the National Archives by Express.co.uk reveal how one particular incident blew up.

It all came to a head when British fisheries protection vessel HMS Kellington arrested a French trawler called ‘Athos’ for illegally fishing in British waters on March 24, 1972.

The next day, the French warship ‘L’Agile’ descended on the Port of Fishguard, Wales, without giving any prior warning to the UK government or local naval commander.

The trawler had requested French naval offices to come as witnesses to give evidence on their behalf.

Fishguard Port, Wales (Image: GETTY) Related articles EU gravy train: Charles Michel ‘got big break’ from Guy Verhofstadt Norway’s staggering request to POLICE British waters exposed The ship ‘L’Agile’, which should have informed the local naval authorities of its intention straight away, instead arrived unannounced as a surprise to not only the local naval commander, but the Ministry of Defence (MOD) and the Foreign and Commonwealth Office (FCO).

Labour MP George Cunningham asked Peter Kirk, Under-Secretary of State for the Navy, whether he would stand for this behaviour.

He asked: “Is it not a highly unusual practice for a foreign state to send one of its warships into a British port following the arrest of a merchant vessel and the trial of its captain in the British port?

“Has the Under-Secretary observed that the captain of the French ship said that, though unusual, this practice might have to become normal.

Brexit boost: Why UK will be ‘best country in the world for science' [INSIGHT]

Mr Kirk admitted that it was unusual for the French Navy to arrive unannounced on the UK shore.

He replied: “The drill for fishery protection vessels like ‘L’Agile’ is for us to be given an outline programme in advance.

“We are supposed to be given 24 hours notice of a call. This call was rather unusual and unscheduled.

European fisheries (Image: EXPRESS NEWSPAPERS) “We are discussing with the French authorities the circumstances in which notification might be given in the future.”

He added that while the French on this occasion had not followed the agreed rules, there may need to be a review of the current processes, which appear to be too inflexible.

After this interaction, Mr Cunningham wrote to Mr Kirk to complain about “the substance of the point” as well as the way in which he answered the question.

Because it had taken a second prompt to get the information required, Mr Cunningham claimed the minister had not been forthcoming and that it was “not good ministerial practice”.

Trending Mr Kirk responded that he had not meant to be evasive, but that he viewed the visit as acceptable.

He added that a general programme was given to the UK government in mid-February and that exact timings were to be given later, but that the Fishguard visit was due to the ship's fisheries protection duties and therefore a last minute change of programme.

However, it was affirmed that 'L'Agile' should have given notice as soon as it knew its intention.

The EU countries that needs the UK fishing waters most (Image: EXPRESS NEWSPAPERS) Mr Cunningham later demanded to know whether FCO would make an official protest to the French government, but was shot down by the Under-Secretary of State for the Foreign Office Anthony Kershaw, who insisted that it was not necessary.

FCO documents described the incident as a “minor administrative failure” and said: “Our wish has been to play down any suggestion of confusion or discord between ourselves and the French Navy.”