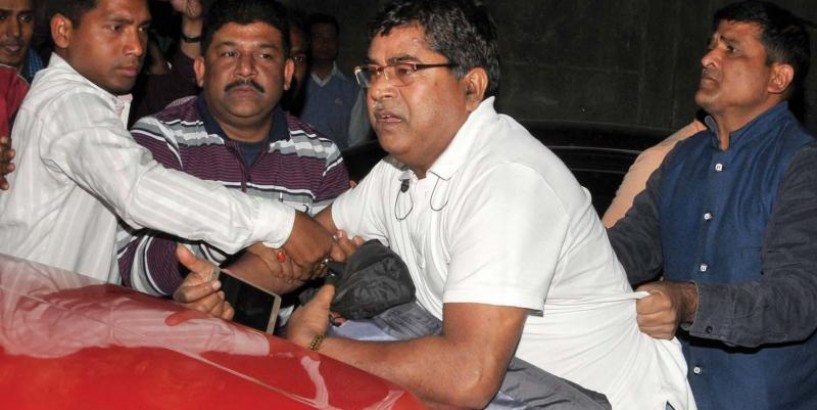 CBI officers who went to question Kolkata Police commissioner Rajeev Kumar in connection with the Saradha ponzi scam, being detained by Kolkata police in Kolkata last week. (Photo: PTI) The recent confrontation between the CBI and Kolkata Police Commissioner on the Saradha Chit Fund scam case has evoked debate on the efficacy and stability of legally structured Criminal Justice System (CJS) in India. Whether the substantial law viz Criminal Procedure Code (CrPC), police rules and procedural regulations are adequate to ensure smooth investigation process, when interests of political executive of the Union and state governments are confrontationist and not cooperative?

Are functionaries deviating from Standard Operating Procedure (SOP) for protecting the political and strategic designs of political bosses, for safeguarding their career prospects, by hook or crook? Do we require new mechanisms and institutions to ensure the integrity, sincerity and fortitude of functionaries so that they will strictly adhere to the letter, spirit and ethos of the Constitution of India?

The above questions have engaged the attention of numerous judicial commissions and apex court. In Vineeth Narayan and Prakash Singh cases, the Supreme Court directed specific measures viz 1.) Two-year tenure security of senior officers manning the posts of CBI, Central IB, DGP, etc. 2.) Constitution of State Security commission in states, 3.) Separation of law and order and investigation branches. 4.) Constitution of Police Establishment Board to decide transfer posting, promotion and so on. 5.) Creation of State Police Complaint Authority. 6.) Set up National Security Commission.

In fact, a few states have implemented these recommendations. But there has not been any metamorphosis or remarkable transformation in the degree of merit and quality of police service delivery to the uninfluential, voiceless, ill organised inarticulate majority of downtrodden sections. Even in states like Kerala, having the highest percentage of educated police in the constabulary, and non-gazetted officers, inst-ances of custodial deaths, human rights violations and favouritism on political grounds are plenty. Our leaders constituting the political bureaucracy of state governments are masterly ingenious in subverting the newly created institutional arrangements by placing their loyalists and sychophants who are adept in managing and manipulating complaints against police by making a drama of following the procedural formalities. In the long run, the justice to victim is not fully delivered or provided.

The structural arrangements through legal architecture created by CrPC, streamlined procedure in Special Acts dealing with sexual violence of minors, civil rights, etc are adequate to achieve full fledged grievance redressal, through purposeful investigation. But officers prefer the line of dancing to the tunes of political bosses. or influential people who can make or mar their career career course.. Two notorious pograms in India since 1947, according to historian Ramachandra Guha (1984 anti-Sikh massacre in Delhi and 2002 Gujarat riots) were enacted due to deliberate recalcitrant posture of those manning law enforcing agencies to become facilitators of mass crimes. In 1984 Delhi riots, the police response to violence was nominal. In 2002 Gujarat riots, one can see, the phenomenon of the public order remaining stable and normal in those places where SOP was enforced effectively. Of the 30 police districts in Gujarat in February 2002, on the eve of riots, in 11 districts, no murder and major crimes were reported because counter riot measures were efficient. In eight districts, moderate level disturbances were noted wherein the murder incidents ranged below 10. The high voltage gruesome violence was enacted in 11 districts, including two commissionerates of Ahmedabad and Vadodara cities since the executive magistracy and police authorities had chosen to be abettors of mobs rampaging on Muslim settlements. The Gujarat state government’s propaganda claimed that Godhra train fire killing 59 Ram bhakts enraged Hindus everywhere and thus extensive violence. Significantly in 11 districts where peace prevailed are places where greater intensity of violence was noticed in the post Babri Masjid demolition riots in 1992.

As witnessed in the Gujarat riots and its aftermath, the political bureaucracy, particularly the chief minister Narendra Modi, Deputy home minister Amit Shah, had nurtured a group of loyal officers in police, in various ranks, who were enjoying unbridled accessibility to them, and they did not enjoy undue authority in the department. Often the supervising officers avoided excercising their normal monitoring of these officers, who indulged in numerous illegal acts in pursuance of the political objective, strategy and tactics of the ruling party. The apex court had ordered re-investigation of 2,000 odd cases filed by victims of riots, as investigation was unprofessional and favourable to Hindu accused persons. Similar is the case of 17 alleged fake encounter cases reported from Gujarat from October 2002 to March 2007 in which statutory supervision of investigation was neglected by supervisory officers, thanks to patronage enjoyed by perpetrators of these crimes from the CM and home minister.

In the recent tug of war in CBI between the director Alok Verma and special director Rakesh Asthana, the Union government favoured the latter, allegedly due to his clout as Gujarat cadre officer with Narendra Modi. The tenure security stipulation by the apex court in Vineet Narayan case did not protect the director from premature transfer by the government.

Another instance of law and empowered institutions not being successful to protect enforcers of the Rule of Law, is in the operation of Section 6 of the Commission of Inquiry Act 1952. This Section provided blanket protection to all witnesses, including government servants, deposing evidence to the Commission on matter relevant to the subject matter of inquiry. Even officers who did not commit any illegal act do not depose truth incriminating to the government officials who committed acts of commission and omission for favouring the political agenda of the ruling party.

Before the Commission probing the 1984 anti-Sikh riots in Delhi, even cops belonging to the Sikh community, did not disclose truth about the violence. Gujarat government had even deputed their advocate representing the government in the Justice Nanavati Commission, probing into genesis, course and aftermath of the riots to illegally tutor and intimidate government officers who were summoned by the Commission. The witness was directed to depose in favour of the government. Only two cops submitted affidavits independently without complying with the instruction of endorsing their affidavits drafted by the advocates. These officials are facing prosecution from government in the form of departmental proceedings now also.

The long and short of the story is that law and institutions meant to protect honest and impartial officers committed to uphold Constitutional morality have been subverted by unscruplous career oriented officers who championed the cause of the ruling political bureaucracy. Expectedly, they were rewarded with good placements and even post-retirement assignments including governorship of states. There are instances in Gujarat where seven IAS and 14 IPS were rewarded for their alleged collaborative role in 2002 riots and about seven IPS officers were penalised for their genuine efforts to enforce the Rule of Law. It is axiomatic that the solution lies not in enactment of more laws, procedural rules and regulations for creating a favourable ambience for honest fortitudinous government functionaries.

“The people”, the ultimate sovereigns of the nation should become vigilant and act through various measures, including ballot against those in political bureaucracy subverting the Rule of Law. After all it is the social contract of Indian people (We the People of India, having solemnly resolved — Premable of the Constitution) that created the Constitution of India. Unfortunately, Indians had not acquired awareness and maturity to absorb and actualise foundational ideals of democracy evolved over the years, since European Enlightenment, and through American and French Revolutions and evolution of liberal values in Britain from days of Magna Carta in 1215 CE.

Modern India is a product of the Renaissance started in Bengal by Raja Ram Mohan Roy., Ravindranath Tagore and so on. Recently in Kozhikode city about 4 lakh people having one or more four-wheelers submitted false affidavits in the name of God, and obtained BPL ration cards. They belong to all castes, religions, classes and areas.

The bitter truth is about the operation of law of diminishing merit on the commitment of Indian people to the ideals of modern Indian renaissance, in every successive generation. A new Renaissance to strictly adhere to the core values of the Constitution of India have to start at micro level upwards. This alone can curb government functionaries pursuing careerism, at the cost of Constitutional morality, law and basic tenets of Indian heritage.

(The author is former DGP of Gujarat)