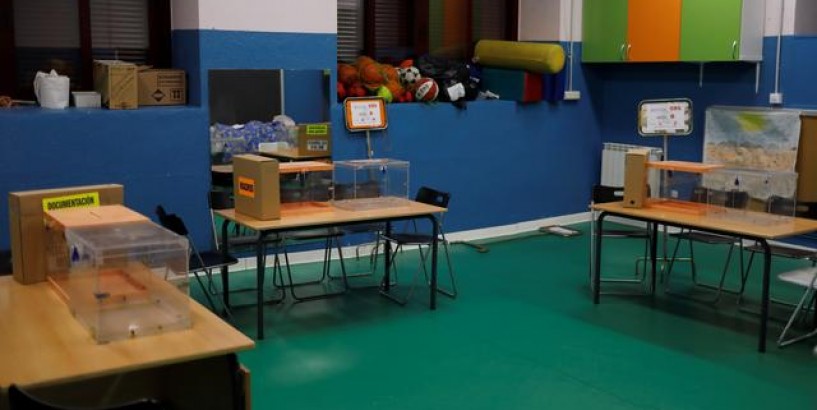 Divided and election-weary, Spain heads to the polls

MADRID – A bitterly divided Spain goes to the polls on Sunday for its second parliamentary election in just over six months, likely to deliver an even more fragmented parliament with no clear winner and a sizeable showing by the far-right.

Ballot boxes are seen in a polling station ahead of general election in Madrid, Spain November 9, 2019.

Spain has been struggling to put stable governments together since 2015, when new parties emerged from the financial crisis following decades during which power oscillated between the Socialists and the conservative People’s Party (PP).

Acting Prime Minister Pedro Sanchez called this election – the fourth in four years – after his Socialist Party won a ballot in April but failed to form a government, betting that a new vote would strengthen his hand.

“There are only two options: either vote for the Socialists so that we have a government, or vote for any other party to block Spain from getting a progressive government,” Sanchez told supporters at a closing rally in Barcelona on Friday.

Opinion polls show the Socialists in the lead but likely to win slightly fewer seats than in April, while the PP would be stronger and far-right party Vox could become Spain’s third largest party, just months after winning its first parliamentary seats.

One thing is certain: voters are tired of being called to the polls – there were also regional and European Union elections this year. That alone increases the chances that parties will make more of an effort this time to reach a deal over governing and shy away from a repeat ballot.

“We shouldn’t be where we are, having another election. They should have reached an agreement between them. This is a waste of money for Spain and for all Spaniards,” said Madrid resident Santiago Romero, a pensioner.

A minority government led by the Socialists appears the most likely outcome, opinion polls show, but an even bigger question is who the Socialists may ally with and how long any government can last with a very fragmented parliament.

Many voters were still undecided days before the vote, meaning other scenarios are also possible.

Voting gets underway at 9 a.m.(0800 GMT) and ends at 8 p.m. (1900 GMT) in mainland Spain. Results should begin filtering through in the early evening, with almost all votes counted by midnight.

Violent protests last month in the restive northeastern region of Catalonia have overshadowed the campaign, delivering a boost to the right, and in particular to Vox and the PP, whose fiercely anti-separatist rhetoric has struck a chord with many voters.

Lucia Rodríguez-Jurado, an 18-year old student, said she planned to vote for Vox because she saw it as the only party that can defend national sovereignty.

“We just want the problem in Catalonia to end and for national unity to be restored,” she said.

Polls suggest that support for Vox could as much as double, even if pollsters have struggled to estimate the new party’s popularity.

The overall result is likely to be very close, leaving the door open to several possible configurations or even a repeat election.

The number of votes submitted by post has dropped by nearly 27% compared with April, the government said on Saturday, in a potential sign that voter fatigue could translate into higher abstention.

In total more than 92,000 police will be deployed across Spain to safeguard the vote.