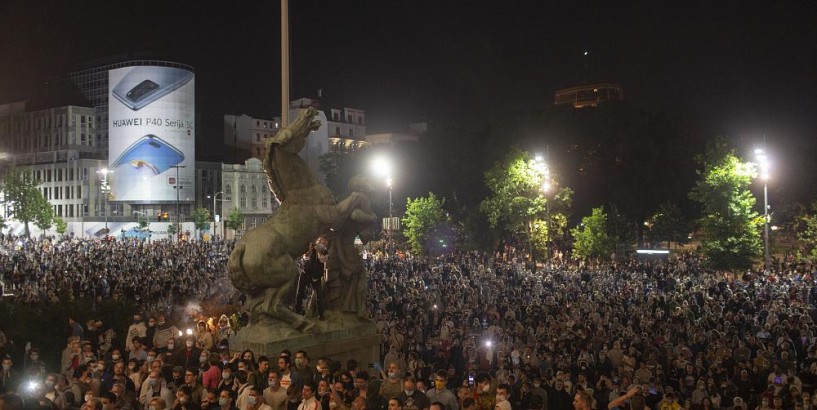 Coronavirus: Protesters attempt to storm parliament in Serbia as lockdown measures are reintroduced

Protesters filled the streets of Belgrade on Tuesday after the Serbian president announced lockdown measures would be reintroduced.

Demonstrators gathered in front of the parliament with some chanting "Resignation! Resignation!".

Police fired several rounds of tear gas at the crowd, according to AP.

Several protesters attempted to storm the building, briefly managing to enter, but were pushed back by riot police.

President Aleksandar Vucic made the announcement earlier in the day as the Balkan country reported its highest single-day death toll from the coronavirus.

He called the situation relating to the virus in the Serbian capital "alarming" and "critical" as the city's hospitals neared their capacity limits.

Vucic said a curfew would be reimposed from Friday "probably" from 6 pm until 5 am on Monday.

He added that people would not be allowed to gather in groups of more than five.

As many as 299 new COVID-19 cases were confirmed in 24 hours in Serbia on Tuesday and 13 people had died, according to the country’s Health Ministry.

Serbia went from having one of the strictest lockdowns in Europe to near-complete reopening at the beginning of May.

The country's total confirmed cases on Tuesday stood at 16,719 with 330 virus-related deaths.