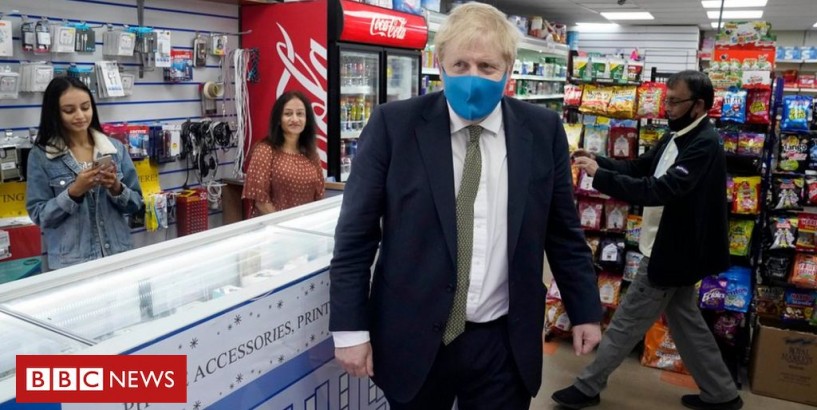 Coronavirus: Labour calls for clarity over face coverings in England

Image copyright No 10 Image caption Boris Johnson was wearing a mask as he visited a shop in Uxbridge on Friday Labour is calling for the government to clarify its position on face coverings, after the PM said a "stricter" approach to their use in England was needed.

Senior sources have said the government is considering making face coverings mandatory in shops in England to slow the spread of coronavirus.

Face coverings have been compulsory in shops in Scotland since Friday .

Why aren't more of our politicians wearing masks? Who needs to wear a face covering in the UK? Coronavirus: How to make your own face mask It came as Mr Johnson was pictured wearing a face covering for the first time while visiting businesses in his Uxbridge constituency on Friday.

The UK government was initially hesitant - in the early days of the coronavirus crisis - about advising people to wear face coverings, arguing the scientific evidence that they reduce transmission was "weak".

However, rules compelling people to wear face masks on public transport in England were introduced on 15 June.

And on Friday Mr Johnson said "the balance of scientific opinion seems to have shifted more in favour of them than it was, and we're very keen to follow that".

He told a Facebook Q&A with the public: "I do think we need to be stricter in insisting people wear face coverings in confined spaces where they are meeting people they don't normally meet.

"We are looking at ways of making sure that people really do have face coverings in shops, for instance, where there is a risk of transmission."

"We urge ministers to conclude this review rapidly to provide the strong and clear guidance needed," he wrote on Twitter .

Shadow exchequer to the Treasury Wes Streeting said it was "not helpful" for the prime minister to do a photo shoot wearing a face mask until there was more clarity over when they should be worn.

"At the moment people are hearing different messages from different quarters," the Labour MP told BBC Radio 4's Any Questions.

Tory MP and former cabinet minister Andrea Leadsom told the programme she didn't want masks to be mandatory but "people should be considerate of others" and start to think about carrying one wherever they go.

The messaging on face masks has evolved, to put it mildly. And Labour's calling on the government to offer some speedy clarity on the matter.

Of course some will suggest that the position has evolved as the science has evolved. But perhaps something to consider here too; the economy.

Today Boris Johnson urged people to go back to work. He also hinted at a stricter policy on face masks.

Lo and behold he was pictured, out and about at a shop and takeaway, wearing a face mask. It doesn't take a detective to spot an overarching theme.

Ministers want people to start embracing the new normal; leaving their homes, spending money and helping businesses get back on their feet - but yes with mitigation measures, like masks, in place.

Those mitigations are of course there to help suppress transmission but can also play their part in in helping people feel confident.

Because public confidence is important; you can urge someone to do something but they may well resist unless they feel safe.

The World Health Organization says non-medical face coverings should be worn where social distancing is not possible.

Homemade cloth face coverings can help reduce the spread of coronavirus from people who are contagious but have no symptoms or are yet to develop symptoms.

Currently people in England are advised to wear a face covering in enclosed public spaces where social distancing is not possible - on top of the mandatory requirement to wear one on public transport and when visiting hospitals.

Those exempt from wearing face coverings include children under 11, people with disabilities, those with breathing difficulties and anyone travelling with someone who relies on lip reading.

Passengers who break the rules on wearing face coverings on public transport in England can be fined £100 and removed from services.

However British Transport Police had only issued 10 fines up to 22 June.

SOCIAL DISTANCING: What are the rules now? JOBS: Can my boss force me to go to work? EUROPE LOCKDOWN: How is it being lifted? TWO METRES: Could less than 2m work? The rules on face coverings vary across the nations. In Scotland face coverings have been mandatory in shops since Friday and they are also compulsory on public transport.

People in Wales are being asked to wear non-medical face coverings where social distancing is not possible - including on public transport - but the government in Cardiff stopped short of making their use mandatory.

How has the UK government's position on face coverings changed? 12 March : England's deputy chief medical officer Dr Jenny Harries says it is "not a good idea" for the average member of the public to wear a face mask as they may not use it properly and put themselves at more risk of contracting coronavirus 17 April: The transport secretary says the evidence on whether masks work is "quite mixed" and it is possible wearing them "could do more harm than good in certain situations" 1 May: Downing Street says face coverings have a "weak but positive effect" in reducing the spread of coronavirus 11 May: People in England are advised to wear face coverings on public transport and in enclosed spaces where social distancing is not always possible 15 June: Face coverings are made compulsory on public transport in England Meanwhile, outdoor pools can now reopen in England and amateur cricket, theatre and other live performances are also allowed outdoors.

In Wales holiday accommodation without shared facilities are also allowed to reopen from Saturday .

It comes after the prime minister said people should now be returning to their workplace if they can.

A further 512 coronavirus cases were reported in the UK on Friday, and the Department of Health said 48 more people had died with the virus.

YOU, ME AND THE BIG C: Cancer treatment during the pandemic GROUNDED WITH LOUIS THEROUX: The ten most surprising moments from the lockdown podcast