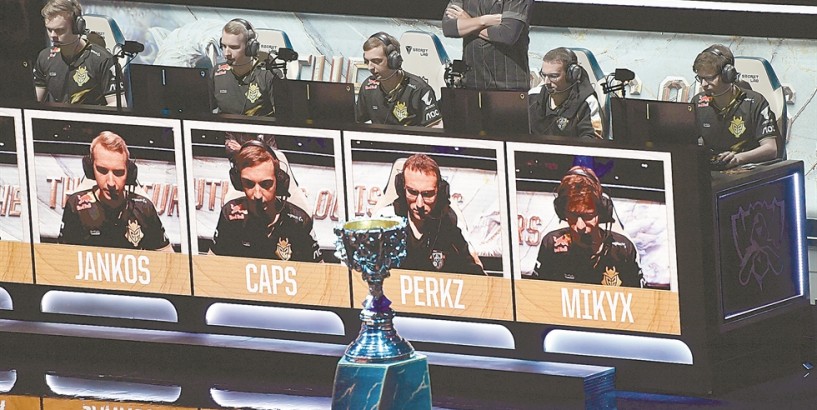 Team G2 Esports are in action during the Final of League of Legends esport tournament against Team FunPlus Phoenix in Accor Hotel Arena in Paris, France, Sunday. /EPA-Yonhap

A team from China mounted a ruthless onslaught to win the online video game League of Legends world title on Sunday in front of colorful and noisy crowd of 20,000 in Paris.

League of Legends, a multiplayer gothic fantasy war game, boasts over 100 million active online players and the world final, known as 'the Summoner's Cup' is considered the holy grail of the so-called e-sport titles.

In Bercy's dimly lit and packed ranks there was a large teenaged presence, many of them dressed up as warriors, with the gamers sat in banks where the tennis court would be, with a four-sided giant screen switching between game action and the player reactions.

The action was also broadcast live to giant screens including one at the downtown Paris city hall at Hotel de Ville, with the global audience expected to smash the 100 million of last year.

"We were not expecting such a one-sided win," OGaming TV commentator Fabien Culie told AFP.

Better known as Chips Culie, he commentated much of the tournament, live-streamed into adolescent bedrooms around the world.

"It was a bit frustrating that there wasn't a bit mores suspense," he said.

G2, featuring 'Ocelote', the Spanish super-gamer Carlos Rodriguez, had indeed been expected to put up more of a fight after thumping SKT in the previous round, a team featuring the world's best player 'Faker'.

The trophy itself, lifted by Kim Tae-sang AKA "Doinb", after being brought on stage to raucous applause inside a luxury Louis Vuitton case, as the football World Cup was in Russia in 2018. (AFP)