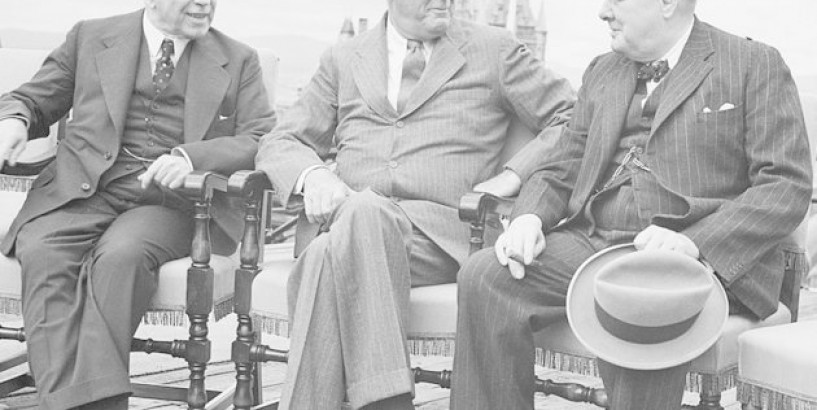 Canadians and the world should not forget that it was Liberal Prime Minister Mackenzie King who opened the atomic Pandora's box. King literally let the nuclear genie escape from Canadian uranium, with dire consequences threatening the very existence of human civilization.

In June of 1942, Malcolm MacDonald, the British High Commissioner in Canada, informed him about the British atom bomb project, codenamed "Tube Alloys." The first country to possess a military weapon of this kind would win the war, the Prime Minister was told.

Only a month later, a secret order in Council allocated $75,500,000 in 2020 dollars for the Canadian government to buy sufficient Eldorado stock to take effective control of the company and its uranium mine in Port Radium in the Northwest Territories.

Because of a possible Nazi invasion of England, King also agreed in August that a British scientific team could establish an atomic facility at the University of Montreal to develop a nuclear reactor. The British ordered tons of uranium ore from Eldorado and, at the direction of the Minister of Munitions and Supply, C.D. Howe, obtained heavy water from the Consolidated Mining and Smelting company in Trail, B.C. to moderate a nuclear reaction.

The joint development of the atom bomb was one of the main items of discussion when King hosted Winston Churchill and President Roosevelt in Quebec City for the first Quebec Conference in August of 1943. Sir John Anderson, a member of Churchill's War Cabinet in charge of the British atom bomb project, drafted the Quebec agreement for Churchill's and Roosevelt's signatures that-in Mackenzie King's words-"made Canada also a party to the development."

The accord for U.S.-U.K. co-operation in the development of the atom bomb, signed on August 19, 1943, provided for the complete interchange of information and ideas on all sections of the project between members of the Combined Policy Committee of which C.D. Howe, King's most powerful minister, was the Canadian member.

In January of 1944, the Canadian government nationalized Eldorado and converted the company into a Crown Corporation to secure Canadian uranium for the Manhattan Project. Eldorado's refinery in Port Hope, Ontario, was the only refinery in North America capable of refining the uranium ore from the Belgian Congo, the bulk of which (along with Canadian uranium) was used in the manufacture of the Hiroshima and Nagasaki atom bombs.

In April of 1944, King's Cabinet War Committee allocated $71 million in 2020 dollars for the construction of a heavy water pilot nuclear reactor in Chalk River, Ontario, as a joint American-British-Canadian project.

When he first heard that the Americans had dropped the atom bomb on Hiroshima on August 6, 1945-instantly killing over 70,000-King wrote in his diary, "We now see what might have come to the British race had German scientists won the race [to develop the atom bomb]. It is fortunate that the use of the bomb should have been upon the Japanese rather than upon the white races of Europe."

After Igor Gouzenko, the cipher clerk in the Russian embassy in Ottawa, defected to Canada, King believed he had received a mission from God to reveal the secret Soviet aim for world conquest, a "Russian intrigue against the Christian world."

Canada would be forced to seek protection under the American nuclear umbrella. "The atomic bomb has changed everything," King concluded. "It has made the North of Canada the vulnerable area of attack of this continent." "If war ever comes between Russia and any part of the British Commonwealth and the United States," he wrote, "this country would be the battlefield and everything we value here would be obliterated."

King and newly-elected British Prime Minister Clement Attlee arrived in Washington in November of 1945 to discuss the atom bomb and atomic energy with President Truman.

Truman suggested that Vannevar Bush, head of the U.S. Office of Scientific Research and Development, Sir John Anderson and the Canadian ambassador to Washington, Lester Pearson, draft another agreement regarding the control over atomic energy and the atom bomb under the auspices of the United Nations.

But this agreement between Truman, Clement Attlee and Mackenzie King did not reach fruition. Alarmed by Gouzenko's spy revelations and the discovery that the Russians had penetrated the Manhattan Project with scientists betraying atom bomb secrets, the U.S. Congress passed the Atomic Energy Act of 1946, signed by President Truman on August 1, 1946. It established the civilian United States Atomic Energy Commission to control nuclear weapon development and nuclear power management and prohibited the sharing of nuclear information with other countries.

King saw photographs of the atomic bombing of Hiroshima and Nagasaki at the Air Ministry in London in 1946. He recorded that "the pictures were appalling. It was a terrible business to look at."

Yet the following year, Winston Churchill confided to King that the Americans would not allow the Russians to "communize" Western Europe. If they attempted to extend their political boundaries, the Americans would let the Russians understand that "their cities would be bombed within a certain number of days...for a year past, the pattern had been worked out and the plans for the destruction of cities in Russia were under way."

The Soviet Union exploded its own atom bomb in 1949, averting such a U.S. nuclear blitz in which, using Canadian uranium, over thirty million Russians would have been killed.

Mackenzie King believed the universe functioned according to eternal spiritual and moral laws. These included those of karma, "the Hindu doctrine of our paying ourselves for all the evil we have done and receiving our reward to the extent that we, ourselves, have given 'help to others.'" This was a doctrine in which he believed "absolutely."

If King is right, Canada bears a special responsibility to be in the forefront of the global movement to eliminate the very nuclear weapons Canada helped to create. Past culpability conveys present responsibility.

We need to restore this lost historical memory so that we can evaluate the present with full knowledge of our past. Canada has a moral obligation to ratify the UN Treaty on the Prohibition of Nuclear Weapons.

Anton Wagner is a member of the Hiroshima Nagasaki Day Coalition in Toronto. His brief "Canada and the Atom Bomb," submitted by Hiroshima survivor Setsuko Thurlow to Prime Minister Trudeau, is posted on the HNDC website http://www.hiroshimadaycoalition.ca/