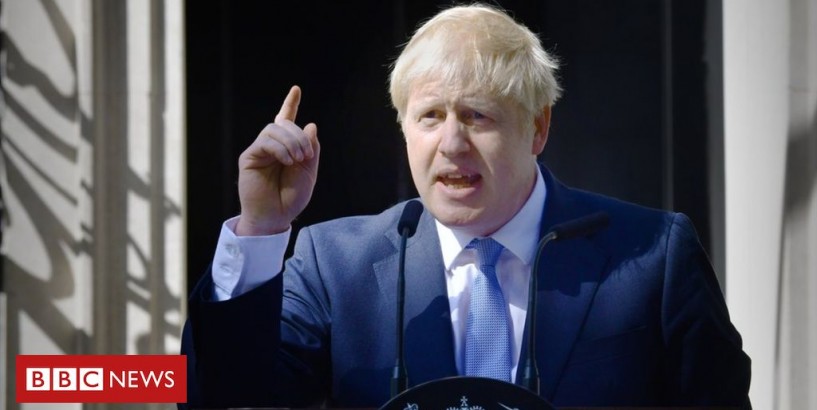 Brexit: Boris Johnson and Leo Varadkar to meet in Dublin

Image copyright Reuters Image caption Last week Mr Johnson said he would rather be 'dead in a ditch' than delay Brexit beyond 31 October Brexit is expected to dominate a meeting between Boris Johnson and Taoiseach (Irish PM) Leo Varadkar in Dublin later.

It will be their first face-to-face meeting since Mr Johnson became prime minister in July.

He has ruled out asking the EU to delay the Brexit deadline of 31 October - but the Irish government said it would support another extension.

Mr Varadkar has also warned the risk of no deal is "significant and growing" .

No-deal Brexit checks 'needed near Irish border' Dublin plays the waiting game over new PM 'Irresponsible' not to plan border vote Speaking during a press conference at Dublin Port on Sunday, Mr Varadakar said he would be asking Boris Johnson how he plans to get a Brexit deal through Parliament when he does not have a majority in the House of Commons.

Why is the meeting taking place? The taoiseach invited Mr Johnson to Dublin two months ago , shortly after he was installed in Downing Street, to discuss Brexit.

The two leaders have very different views on how the deadlock should be resolved.

The Irish government maintains that the backstop - the mechanism to avoid an Irish hard border - is needed in any withdrawal agreement, because of decisions made by the UK.

But Mr Johnson has said he will not sign up to a deal unless the backstop is removed, because it is "anti-democratic".

Media playback is unsupported on your device Media caption Mr Johnson on his planned visit to Dublin Ahead of the visit to Dublin, the prime minister said he would use the meeting to raise potential alternatives with Mr Varadkar.

He said he wanted to discuss the possibility of an all-Ireland food standards zone as part of a solution to replace the Brexit backstop.

But Dublin has said the UK has not yet offered any "credible" alternative to the backstop and insists it only negotiates through the European Union's team.

Image copyright Reuters Image caption Leo Varadkar says the Irish government will remain calm and consistent despite the uncertainty about how and when Brexit will happen Will Parliament be suspended this week? It is due to happen at some stage between Monday and Thursday and MPs are not set to return until mid-October.

Before Parliament is prorogued, MPs will debate progress reports updating them on efforts to restore the Stormont assembly , which collapsed more than two years ago.

The government has said it is planning to "intensify" efforts to kick start power-sharing, because there are concerns about the impact of prorogation on Northern Ireland.

The Northern Ireland Secretary Julian Smith has said unless power-sharing talks succeed before Brexit happens, direct rule powers from Westminster will need to be implemented "at pace".

No-deal Brexit: What you need to know What happens next? Meanwhile, legislation designed to delay a no-deal Brexit and force the prime minister to request an extension to the deadline from the EU will receive royal assent later.

However, the prime minister has said he will not ask the EU for another extension, so it is unclear what might happen next.

The government will move another motion asking MPs to vote for a general election on Monday too, but it is unlikely to pass because opposition parties have agreed to reject the demand, saying Mr Johnson is trying to force through a no-deal exit.

What is the backstop? The backstop is a key piece of the Brexit deal dictating what will happen to the border between Northern Ireland and the Republic of Ireland.

It is a last resort that guarantees a frictionless border if no better solution is devised in time - by maintaining close ties between the UK and the EU until such a solution is found.

The Irish government has insisted if it took effect it would only be temporary, but Boris Johnson has said he will not sign up to a deal unless the backstop is removed from the withdrawal agreement.