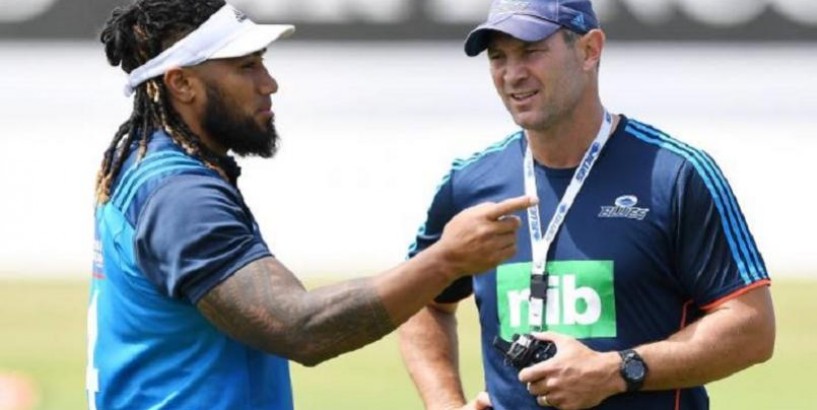 Blues recruit Ma'a Nonu breaks his media silence: 'I want to be an All Black again'

First things first. Ma'a Nonu wants to be an All Black again.

That was the surprisingly frank admission made by the 36-year-old, 103-test double World Cup-winning All Black in his first chat with the media since re-signing with the Blues late last year. Until now, he has turned down all requests to speak to reporters.

Nonu has returned to New Zealand rugby after a near four-year absence playing for Toulon in France and has revealed the motivations that drive him in 2019 as he gets set to run out in Super Rugby for the first time since 2015.

The powerful midfielder, of course, has nothing left to prove at the highest level, having been an important cog in the back-to-back World Cup triumphs in 2011 and '15 and, alongside Conrad Smith, forming arguably the greatest centre pairing in the country's proud test history. His entry into the centurion's club is testimony to the prolonged nature of his excellence at the top of the game.

But he concedes he remains motivated to perform at the highest levels and also has unfinished business in Super Rugby where he has not always been able to produce the level of rugby he has in the black jersey.

Asked, following a Tuesday training session in intense summer heat in Auckland, whether being an All Black again in 2019 was a motivating goal, Nonu did not look to dodge the question. His condition has been the talk of the Blues this pre-season, and it appears he is not about to sell himself short now.

"I think it's there on everyone's minds," he said of the prospect of an unlikely resumption to his test career. "For me it's trying to make the Blues team first, so one step at a time."

That first stride down the path will take place at Eden Park on Saturday night when these re-shaped Blues open their season against back-to-back champions the Crusaders. Nonu looks set to start in the midfield, possibly alongside TJ Faiane.

He was not keen, though, to expand on what playing at a fourth World Cup, and bidding for an unprecedented hat-trick of titles, would mean to him.

"All I'm thinking about is lunch right now and this game this week (against the Crusaders), so I can't really tell you," he said.

And, no, he has not spoken to All Blacks coach Steve Hansen yet this season. Those conversations might come later, if Nonu manages to produce the form that returns him to national team contention.

But Nonu did concede he had things still to prove in Super Rugby that were also big motivators for him this season.

"Yeah, I haven't won a Super Rugby title before, have come up short twice, and played in a lot of semifinals for the Hurricanes. It's another driver this year," he told a large media contingent.

He admitted it was "surreal" to be re-entering the Super Rugby arena after such a long absence, but said finishing his playing career was something that had not yet entered his thinking.

Nonu confirmed family had been a big part of his surprise decision to return to the Blues.

"Family has always been a priority, so coming home it was a big factor. We were always going to come back to New Zealand. We missed it here, we missed family and I wanted to put my kids through school here as well."

Asked the secret of his remarkable condition at an age when many players are long past their best, Nonu smiled and said: "I guess it's what you put in your mouth. [The body] hasn't always been in good shape but I've learned with experience about my body and my mind.

"I'm still trying to achieve more goals and it's the lifestyle you live if you want to play professional sport."

He also felt maturity and wisdom would help him overcome the age factor as he went through this return to New Zealand rugby.

"Hopefully I've still got the wisdom upstairs and the physicality as well to play Super Rugby because it's really intense. The Top 14 and Champions Cup is a brutal, brutal competition in Europe, so I've learned a few things about playing week-in, week-out."

Nonu said his former team-mate and mentor Tana Umaga had been an important part of his decision to return via a Blues franchise he played for previously in 2012 and '14 and he thanked the under-achieving Auckland outfit for "opening the door" to him.

He was also excited to team up with Sonny Bill Williams again and mentioned he had been impressed by the standards set by new coach (and another national ex-team-mate) Leon MacDonald.

"Leon has brought a high standard into our environment and created that culture where we train to the best, we expect the best from each other and we work for each other."

They will likely need it Saturday. "It's going to be a tough, tough game," said the All Black great before skipping off to scoff that lunch.