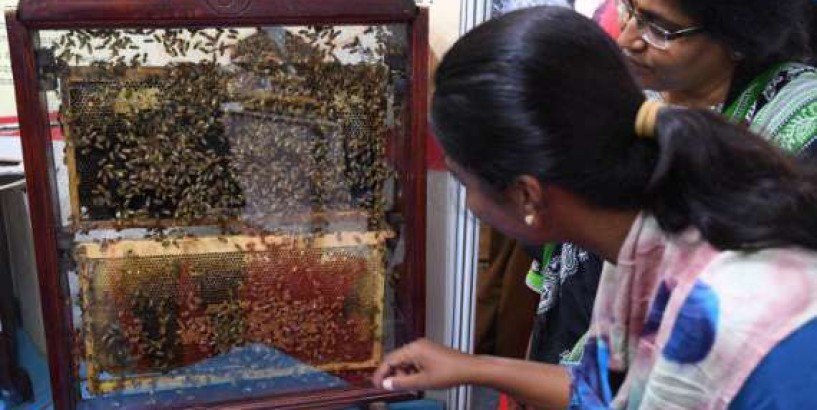 Honey farmers or apiarists in Karnataka, who were primarily collecting only honey, are now beginning to strike it rich by extracting the prized 'bee venom'. Protein-rich bee venom, which costs up to Rs 15,000 a gram, is the most sought after resource in the cosmetic and pharmaceutical industry as it is widely used in anti-ageing creams and treatment of severe arthritis.

A couple of bee farms around Bengaluru and other parts of the state have already begun to extract the venom in small quantities.

While the trend is yet to catch up with apiarists, scientists at the department of apiculture in the University of Agricultural Sciences (UAS), Gandhi Krishi Vigynyan Kendra (GKVK) and a few other independent firms are popularising the technology to assist bee farmers to extract the venom and other byproducts.

Guruprasad Rao of HoneyDay Bee Farms in Kadabagere village told DH that Indian bee venom is far superior compared to the one imported from the West. Dr Vijaykumar K T, scientist at the department of apiculture, GKVK also said they have been teaching farmers the techniques to extract venom.

'The venom has both anti-inflammatory, anti-viral properties and is used in several drugs, especially to treat arthritis and rheumatoid arthritis. The venom is so expensive that one gram would cost between Rs 5,000 and 15,000. More than 50% of the venom is composed of a protein called melittin. If the farmers are able to separate it from the venom and sell it, it has even value,' said Guruprasad Rao.

Unlike the usual cruel methodology, farmers have adopted a new and painless mechanism that does not hurt the bees. 'Generally, bees die after the bite as their stinger is stuck inside the enemy body. But we make them bite against a glass surface covered with thin fabric so that the stinger does not get stuck. When the venom drops onto the surface, it dries up in less than a few minutes. Later, we scrape it to collect the venom,' Guruprasad explained.

According to Dr Hemalatha, Assistant Director of Horticulture (Apiculture), it takes about 5 to 10 minutes to extract one or two grams of venom. 'Each bee contains only a few millilitres of venom. We need at least 18 to 20 colonies of bees to extract one gram of venom. Each colony comprises hundreds of bees including a single queen, hundreds of male bees and 20,000 to 40,000 worker bees. A few farms have successfully extracted the venom and are selling it to pharma companies already,' the official explained.

Currently, species like Apis mellifera (European honey bee) and Apis cerana (Asiatic honey bee) are more popular among the Indian honey farmers for extraction of venom and other byproducts.