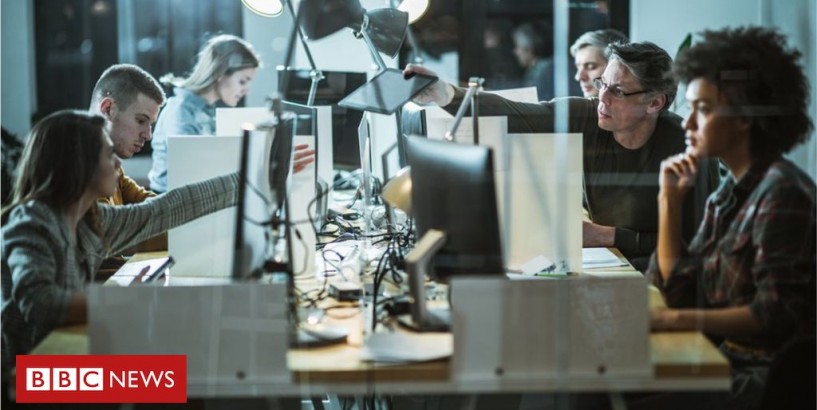 Image copyright Getty Images Image caption Increasing automation could lead to fewer people being employed Around 500 jobs could be lost in Edinburgh over the next three years, as one of the city's financial giants invests in automation.

Phoenix Group, which last year took over much of Standard Life, has announced a tie-up with a software, technology and outsourcing company.

The deal will see many of its workers transfer to TCS.

This was formerly known as Tata Consulting Services - a global company based in Mumbai.

It already has a presence in Edinburgh will drive much of the change in selling and handling workplace pensions for Phoenix.

The company did not say how many staff will transfer, except to say that the majority of the 3,000 jobs in the city will be retained.

Those transferring from Phoenix to TCS will do so on existing pay and employment terms, and will be part of the TCS subsidiary Diligenta.

However, when pressed, a spokeswoman said the reduction in payroll could be "around the mid-hundreds" over the next three years, while the company will try to minimise compulsory redundancies.

Image copyright Standard Life Aberdeen Image caption Phoenix has taken over much of Standard Life While much of that reduction could be achieved by not replacing departing workers, it would still be a blow to the Edinburgh economy. Phoenix is among the city's biggest private sector employers.

The spokeswoman emphasised that Phoenix remains committed to retaining Edinburgh as an operational hub, and that TCS is creating a new technology hub in the city as part of the partnership.

Phoenix Group bought the pensions and savings part of Standard Life Aberdeen in 2018, announcing the deal in February last year and concluding it in August.

It was an important step in the London-based firm's ambition of becoming the biggest consolidator of pensions and savings operations in Europe, as the financial sector adapts to changing regulatory conditions for capital requirements.

Digital platform Phoenix continues to operate workplace pensions under the Standard Life brand and its Edinburgh base is in Standard Life House on the capital's Lothian Road.

The intention of the strategic partnership between Phoenix and TCS is aimed at developing the software available to its clients in workplaces and their advisers.

It is so that the business can operate on a single digital platform, offering opportunities to provide other services to its employer clients.

Susan McInnes, CEO of Standard Life Assurance, commented: "We want to ensure we lead the way in meeting the needs and expectations of all our customers in the future, and become an even more innovative, progressive, well run business.

"We believe a partnership model is absolutely the right approach. It enables us to work with a leading global organisation with great expertise and to respond to the dynamic environment that we're operating in."