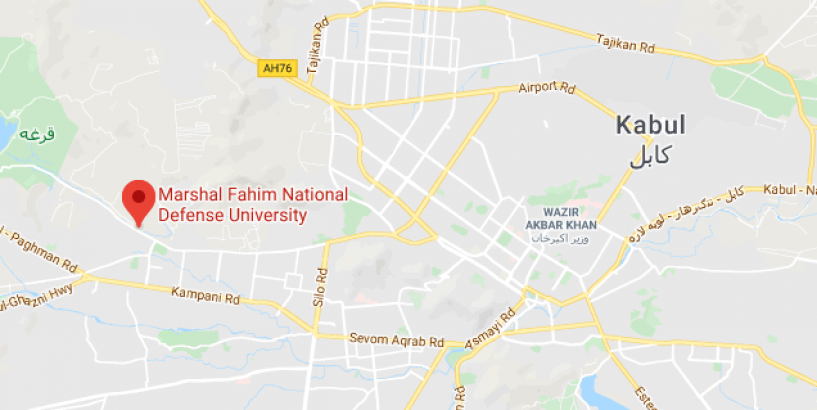 An interior ministry said that a suicide bomber inside a car attacked military academy in Kabul leading to the death of at least six. It was also reported that 12 people have been found to be injured so far. The ministry said that the blast which took place early Tuesday had civilian casualties but the extent of the injuries and death is still unknown.

The bombing took place near the front gate of Marshal Fahim Military Academy, the government-run defence university, said Reuters quoting the interior ministry officials. The residents who live closeby confirmed the attack to a news agency and said that the explosion rocked their house. There have been several attacks in Afghanistan in the past few weeks against the US security forces and the Afghan forces.

Marshal Fahim National Defense University, Kabul Google Maps Similar attacks in the past Last year at least six people were killed during a suicide bombing just outside the academy. The academy is modelled after European war colleges which could train the cadets from Afghanistan. The frequent attacks in the country against the forces has led to several peace talks between the country and Taliban militants. The US and Taliban are pursuing talks to come towards a peace pact.

The Taliban has not attacked any major regions or cities in recent times to maintain the talks with the US. Trump administration is trying to withdraw from the region after nearly 18 years of war in the country. The Taliban forces were toppled in the country in 2001 following a US-led invasion in the same year.

Who is behind the attack? The latest attack is being considered a major attack on the forces. The strike that took place in November was considered to be one of the major attacks previously carried out by the Taliban. It killed at least 12 people during the morning Kabul rush hour.

It is presently unknown who is behind the attack. It took place during the peak point of talks between the Taliban and the US. The possible deal would mean that the US troops would leave Afghanistan. The talks were said to have died in November after Trump announced the same citing that the Taliban is continuing their violence in the country. It resumed in December but was discontinued after the attack on the US-run Bagram military base in Afghanistan .

The number of attacks has raged into record high after the talks for the peace pact started fluctuating.