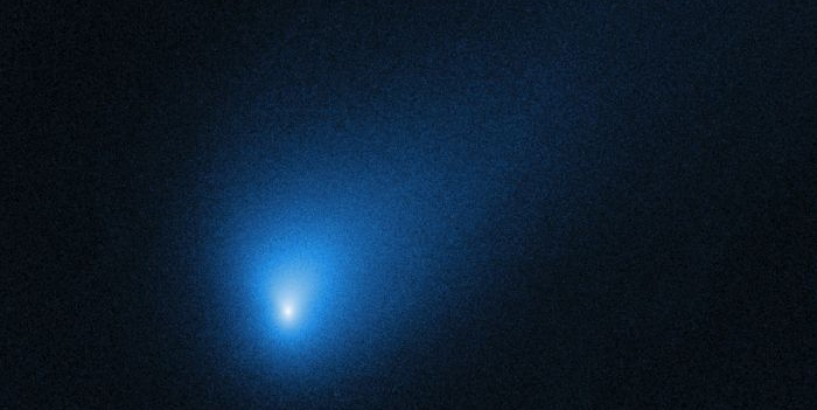 Arrival of interstellar object, comet 2I/Borisov, excites astronomers partly because of how familiar it is - Science News - ABC News

Arrival of interstellar object, comet 2I/Borisov, excites astronomers partly because of how familiar it is Share

A dirty snowball or snowy dirtball (depending on which astronomer you're talking to) is hurtling towards the Earth at approximately 33 kilometres per second. KEY POINTS CUT AND PASTE Key points Comet 2I/Borisov is only the second interstellar object we've detected entering our solar system But it's not that different from comets formed in our solar system This suggests that we may not be as unique a planetary system as we thought

It's making astronomers across the globe very excited, because this isn't just any comet we've detected — it's a comet from outside our solar system.

"Having an interstellar object around is the most incredibly exciting thing," said astronomer Michele Bannister of Queen's University Belfast.

"It's a piece of another star coming to visit us."

'Oumuamua was the first interstellar object we detected, back in 2017.

The comet has been dubbed Borisov after the amateur astronomer Gennady Borisov who first detected it on August 30 this year.

The first was a mysterious cigar-shaped object dubbed 'Oumuamua, a Hawaiian word meaning "a messenger from afar arriving first", that visited us in 2017.

We know Borisov is an interstellar interloper because of the hyperbolic shape of its orbit , which indicates it's not gravitationally bound to the Sun, and the fast speed at which it is travelling.

"These things are sleeting through the solar system all the time, it's just we've finally got to the point where our technology can catch them," said astronomer Jonti Horner of the University of Southern Queensland.

"It would be foolish to imagine we're the only planetary system out there that's spitting things out into space, that's littering the cosmos."

That's because objects like Borisov and 'Oumuamua are a natural outcome of how planetary systems form and evolve, said Dr Bannister.

"Any given planetary system over its lifetime will eject trillions on trillions of these little worlds into the cosmos, and they just wander between the stars," she said.

There are a few reasons why we've been able to pick up Borisov on its way towards our Sun, unlike 'Oumuamua which we spotted on its way out of the solar system.

'Oumuamua's approach trajectory was behind the Sun, relative to the Earth, when it was on its way in, which meant our telescopes on Earth couldn't pick it up.

"Rule one of telescopes: you can't point them at the Sun," Dr Bannister said.

If we'd had a telescope on our orbit on the other side of the Sun, we could have had more warning of 'Oumuamua's approach, she said. What makes a comet? What makes a comet? Tiny, baby planets form out of planetary systems' disc of gas and dust, known as planetesimals At one extreme these objects can be really rocky — asteroids — at the other, really icy — comets Comets are made of volatile materials like water ice, dry ice and carbon monoxide ice, with a bit of dust, rock, rubble and metal mixed in They form in the outer reaches of planetary systems, where it's cold enough for these materials to be solid rather than gas As a comet gets close to the Sun and heats up, these volatile materials sublime, or boil off, into space, which together with some dust forms the coma around the comet

Borisov is a proper comet, whereas 'Oumuamua is what Dr Bannister said is best described as "the husk of a comet" with all its ices baked out.

Borisov is more active than 'Oumuamua, with its little coma of sublimating ices. Its brightness – it's reflecting the Sun's light rather than emitting any visible light of its own – means we can detect it at greater distances from our star.

At two or three kilometres across, it's bigger than 'Oumuamua, which is more the size of a single skyscraper at 200 to 300 metres across, which also helps us see Borisov.

The upshot of all this is that it gives astronomers more time to observe Borisov. Borisov is the first interstellar comet we've detected, maybe

'Oumuamua was weird, Professor Horner said. What was 'Oumuamua?