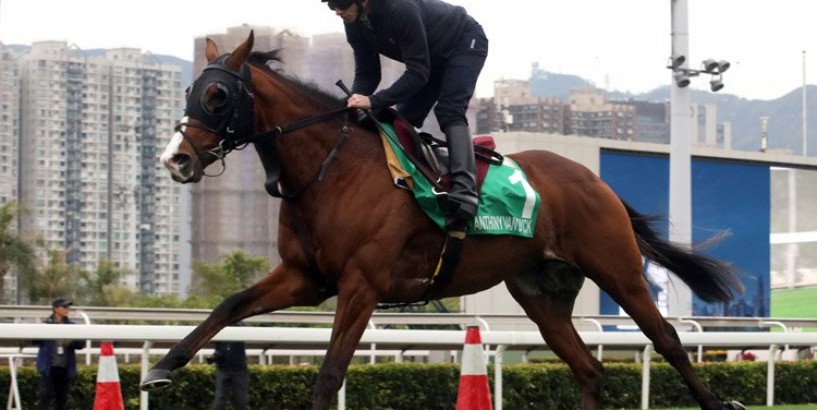 Anthony Van Dyck Is A Derby First At The Longines Hkir

Times have changed in the subsequent decades as racing becomes ever globalised as well as favoured towards speed and precocity, yet it remains by some way Britain's most evocative Flat race.

Because its heroes will often have been retired to stud by now, they are only usually seen in Europe, or perhaps for one final hoorah at the Breeders' Cup in America. So the arrival of this year's winner Anthony Van Dyck at Sha Tin is historic, in that he is the first to have ever competed at the LONGINES Hong Kong International Races.

"There you go now," says trainer Aidan O'Brien when reminded of this fact. "Obviously he's a horse we always thought very highly of, and he's run some unbelievable races through the whole year."

Despite being a son of the pre-eminent Galileo from a top-class Australian family, Anthony Van Dyck is an animal who flew a little under the radar prior to Epsom. He fared best of the O'Brien string in Britain's seminal two-year-old race, the G1 Dewhurst Stakes, but won one of the lower-profile Derby trials at Lingfield on his reappearance.

Seemingly the third string on betting from the stable in the classic itself, he responded strongest in an epic finish where five horses were stretched across the width of the track.

Since then, the colt has placed in the G1 Irish Derby, G1 Irish Champion Stakes and G1 Breeders' Cup Turf, the last-named occasion when meeting a heap of trouble yet being beaten only a length and a half.

"The only disappointing run was really in the King George on bad ground," O'Brien recalls. "He's a lovely moving horse and we always thought he loved fast ground. Obviously he was a little bit unlucky in the Breeders' Cup, but we were still very happy with the performance."

So, as he is without a win since his biggest moment in the limelight to date, another at the very highest-level of worldwide competition in the HK$20 million G1 LONGINES Hong Kong Vase (2400m) would do no harm to his future prospects.

"It would be unbelievable," O'Brien says. "Obviously it's very important, very prestigious for the horse really, were we fortunate enough for it to happen."

For O'Brien and Coolmore, the worldwide breeding operation which feeds its blue-blooded youngsters into the trainer's Irish stable, the Derby represents one of the biggest targets for the first half of the calendar.

Unfortunately it came too soon for their other runner Mount Everest, the Galileo colt part-owned by the Niarchos family's Flaxman Stables out of its multiple Group 1 winner Six Perfections.

He was off for almost exactly a year before returning this September. For Mount Everest, who was just over a length behind Anthony Van Dyck in the Breeders' Cup Turf, the Vase would represent the summit of his achievements.

"He had a small setback early on and we couldn't get him out until later on," says O'Brien. "But he has progressed with every run - we were delighted with the run the last day in America. We're looking forward to seeing him run."