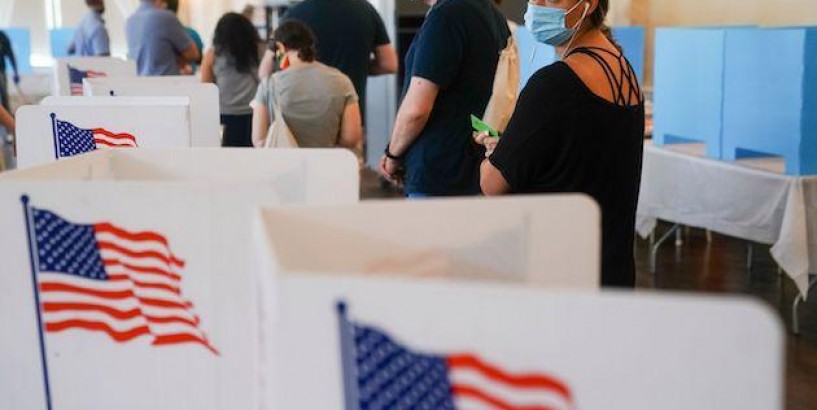 Once again, American voters have a golden opportunity, for the 56th time in a presidential election, to choose between two candidates and their philosophies, representative of two opposing America's & two opposing Worlds, to lead them both safely from the 21st century's extreme dangers into the foreseeable future.

Ever since its birth some 244 years ago, and even before that, during the preceding six decades that led up to its formation, America is a nation born out of a dream that has been hopelessly caught within the grips of an existential nightmare.

From the moment the first African slaves arrived in America's Virginia colony in 1619, and then, by 1729, when the English tobacco planter colonies from Barbados had settled in the young formative American colonies of North and South Carolina and Georgia in the New World, its new white, male European 'cracker' forbears already had opted to become major players in the world's slave trade. Until the abolishment of slavery by England in 1833, owning slaves was as common a lucrative investment practice by both rich and poor white crackers as investing in Wall Street stocks is today, that continues the rape and pillage of the America's and the rest of the New World in the Southern Hemisphere, if not indeed the entire planet, while forever reaping the dizzying stolen wealth of so much of the planet's natural resources for the aggrandizement of only a select few rather than for the common good.

Ever since, many American voters have been hopelessly caught within the existential human and planetary eye of the storm of who among them is most worthy to vote for who more totally believes in the dignity of men and women alike, of all races, colors and creeds and see to it that they're given the same equal opportunity to realize their full potential, while extending that same dignity to the preservation of all living things of the earth and natural world that each succeeding generation has a sacred responsibility to protect and preserve intact for yet coming generations. So far, the results have been sorely wanting something much more than, as yet, has ever materialized.

The angst they have grappled with ever since the very beginning is the original question still raised in the New World about the status of the Africans that had to be enslaved, the original indigenous peoples who had to be exterminated, and whether or not these colored peoples were even fully human beings to begin with, like their Caucasian captors, colonizers, conquerors and overseers, or were they still, at the very most, only 3/5th's of a human being or mere lesser, more base savages, and so undeserving of ever being fully honored and respected as human beings. These lesser beings to be instead forever abused and misused like the rest of the animal and natural world, and even the female gender among the cultures and societies of the colonizers, conquerors and overseers themselves, who already long before had been subjugated and used at the will and beckoning of their white, male European superiors? For many such American and their supporters throughout the world who continue to adhere to similar such belief systems, the Civil War that finally erupted in the 19th century over these and other related issues resolved virtually little, the results of which for many have only served to act like ground glass constantly being rubbed against an open, weeping wound.

To date, those original aggressive European colonizers and their descendants still haven't yet been able to fully resolve this dilemma, at least in their own minds and those of their followers, and so every four years American voters struggle over the angst of which of the two diametrically-different American candidates, are most representative of their opposing philosophies and the America's they represent, who should be voted into office for the betterment of themselves, their children and their children's children seven generations hence and beyond?

In 2020 will it now be the American presidential and vice president candidates who this time around once again believe America was created in the beginning solely for the benefit of the strong, ruthless 1% among them who have the power and ability to continue to take and keep for themselves whatever they can get away with? Or will it be the other pair of American candidates who more deeply and genuinely believe in giving every citizen a fair and equal go , while calling upon all to contribute their fair share of what they have earned to still others for their common mutual benefit?

Will the America that Americans and the rest of the world inherit as a result be a nation that contributes to the freedom of still other oppressed, disillusioned citizens of the world who likewise have become persecuted and enslaved like the Palestinians in Israel and a multitude of other oppressed citizenry in such places like India, Russia, Saudi Arabia, Brazil and so many other regions of the world who once looked to America for the spirit of resistance and hope for the future, yet now look to it for the continued oppression of their own peoples?

America's 2020 Presidential Election is much more than just another contest between two opposing politicians and their opposing world view's because the very future survival of a healthy, happy, planet and all living beings hangs in the balance while the human race everywhere holds its breath in anticipation of the outcome.