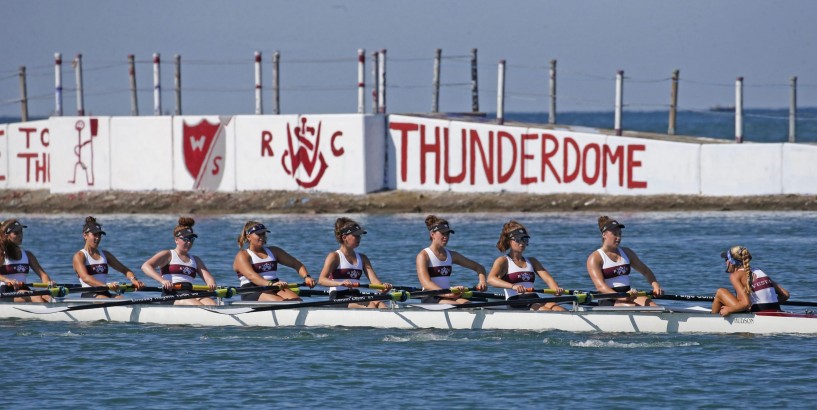 Close to 1,000 competitors in 160 boats glided along the glistening Black Rock Channel, underneath the Peace Bridge and a mostly blue sky, into a stiff headwind and a painted breakwall at the finish line that read “Welcome To The Thunderdome.”

The 106th West Side Rowing Club Invitational Regatta on Sunday continued its tradition of competitive camaraderie between local crews and challengers from throughout the Northeast and Canada, notably rival St. Catharines Rowing Club.

The St. John’s Rowing Club even made the three-day trip from Newfoundland as part of a tour that will conclude with next weekend’s St. Catharines Invitational.

“This is the first time we’ve had the Newfoundland team down to Buffalo,” said St. John’s coach Michael Thistle, who brought a group of junior rowers along with a trailer carrying eight boats.

“We were going to St. Catharines and we looked around and saw that the Buffalo regatta is one of the bigger, nicer ones around. It’s been going on for 106 years, pretty stable here. People seem to like it.”

St. Catharines repeated as team champions with 1,200 points. West Side, which held the trophy for two years before that, placed second with 800 points.

“It’s been going back and forth for a while,” said Mike Cute, head coach and director of rowing for West Side. “We have a really good rivalry racing against St. Catharine’s. Two old clubs with over 100 years of tradition and a great relationship.”

In keeping with tradition, West Side awarded ceramic mugs rather than medals to members of the winning boats. Many of the adult rowers raced to celebrate their victory by filling the trophies with beer.

Ken Gibbons, a veteran coach and board member for West Side, offered some wisdom for the junior rowers.

“I had a drawer full of medals and I don’t know what happened to them,” he said. “I still have every single one of my mugs.”

“It was a great day for the the team overall,” Cute said. “We had some very strong performances from the U19 women.”

The U19 women’s roster includes rowers from high schools City Honors, Mount St. Mary, Sacred Heart, Nardin and Park. West Side also had the runner-up boat in the eight race.

“Most of us row here for our schools during the other seasons and then we come together here at West Side,” said Isabel Treanor, a Mount St. Mary rower and member of the winning eight and four boats Sunday. “You see all these amazing rowers that you have been racing against and then you get to row with them and it’s just like a whole other level.”

Sally Rozumalski, a Niagara Wheatfield graduate who rowed for the University of Louisville and has returned to West Side to coach novices, won the women’s double with Elena Collier-Henzel and was part of the women’s open four victory.

“It’s been about a year since I have been able to row and coming back here to my high school club and getting to row with these girls is really exciting,” Rozumalski said.

“It’s amazing that this has been going on for over 100 years and West Side has been a staple in Buffalo for that long. To see people who have come back who have rowed here before, new kids that are getting the chance to row here for the first time, all racing in the same place, it’s pretty cool to have something that’s really ingrained in the culture here.”

West Side will split its crews next weekend, sending its senior rowers to St. Catharines, and juniors to the Philadelphia Youth Regatta.

The top teams are building up speed in hopes of being selected to race at the 137th Royal Canadian Henley Regatta next month in St. Catharines.

“That’s the ultimate goal,” said Oliva Dobiesz, coxswain for West Side’s U17 four. “This was a very optimistic way for us to start our season on our home course. And now we have to just keep the momentum building forward.”