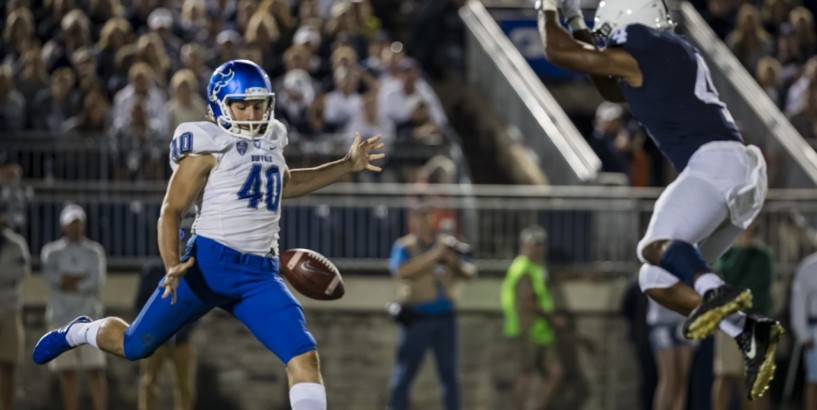 Evan Finegan held back tears as he approached his University at Buffalo football teammates after practice Wednesday morning at UB Stadium.

As the Bulls circled the injured punter, he was overcome with emotions. He had sustained a horrific leg injury over the weekend at Penn State, and there was a concern that he may never play football again.

“I was trying not to break down and cry,” Finegan, a redshirt sophomore from Sterling Heights, Mich., told The News on Wednesday. “It was great to see them, and I’m rooting for those guys, the same way they were rooting for me. I tried not to cry, but it meant so much.”

Finegan returned Tuesday to UB after he had suffered a broken tibia and fibula in his right leg. The injury was the result of a collision with Penn State’s Journey Brown, who attempted to block a punt by Finegan in the third quarter of the Bulls'45-13 loss to the No. 13 Nittany Lions.

“He’s such a good kid and he works so hard, and he’s a really good leader, and when something like that happens, you hurt,” UB special teams coordinator/defensive ends coach Taiwo Onatolu said. “Physically, you want to make sure that the first thing is, ‘Is he OK? Is he fine?’ When you see it live like that, and then you see them bringing out the cart, your heart just drops a little bit.”

The injury was so severe that Fox did not show a replay of how it happened. But Finegan suddenly became a household name and he continued to see well-wishes as he scrolled through his Twitter feed Wednesday afternoon.

“That was probably the easiest way for strangers to find me,” Finegan said. “It was surprising. I woke up from surgery, turned on my phone and there were hundreds and hundreds of messages. I don’t know any of the people who sent them to me. They were just college football fans, from all over the country.

“It shows that it’s more than sports, and that people genuinely care, and it’s so nice to see people leave their biases aside. These people knew nothing about me, other than what they see on my social media account or on my UB bio or because of football. And I know nothing about them. But people were so kind.”

During a four-hour surgery Sunday at Mount Nittany Medical Center in State College, surgeons placed a rod the length of his tibia (the larger bone on the inside of the calf) against the bone. The doctors, Finegan said, found there was no damage to the muscles, ligaments or tendons in his right leg.

He wants to return to playing football by the start of the 2020 season. The friendships he has at UB and the concern from across college football have buoyed Finegan as he begins his recovery.

His cast was removed Wednesday morning, and he must wear a walking boot and have his leg heavily wrapped. He cannot put weight on the leg as it heals for a minimum of six weeks, and he must remain in a wheelchair with his right leg elevated.

“The doctors haven’t given me too much of a timetable, but I need six to eight weeks just to let the bone heal,” Finegan said. “With just a bone break, they’re hoping [I can return] as soon as spring practices, but others don’t want to rush it.

“Other people are saying, ‘You’ll be ready to go by next season,’ and the plan is that. But you can’t count on everything.”

Finegan has been surrounded by his family and by virtual well-wishes from across the world. Wednesday morning, he was surrounded by the people he spends the most time with at UB.

“This is my third season here, and you see the same guys every day, and you get close to them,” Finegan said. “When I got back to my apartment (Tuesday), a bunch of my teammates came around and it was so nice to decompress and talk to my friends again.

“You see these guys more than your family when you’re in college. A lot of us, we even have the same class schedule. The friendships I have here, I value those, and those mean a lot to me.”

Kyle Vantrease, who has inherited the punting job from Finegan, has already found inspiration from his teammate’s attitude towards his recovery.

“He’s been impressively upbeat,” Vantrease said. “He’s always trying to crack jokes and keep everyone in a positive mindset. I think he feels that if he’s positive, then everyone else will be positive about it. He’s going to be the kind of guy who will help, no doubt, and I can’t wait for him to get back and get to practice.”

Finegan expects to remain in Buffalo this weekend when UB plays Liberty, unless UB arranges ground transportation to Lynchburg, Va., about a nine-hour drive from Buffalo. Finegan cannot fly so soon after undergoing major surgery.

His next step is simply to heal. He has been excused from classes this week, and is working with his professors, with UB’s trainers and with the coaching staff to figure out logistics of how to get to and from his classes for the semester.

Finegan said he has not heard directly from Brown, but he said UB cornerback Isaiah King relayed a message from Brown.

“Isaiah said to me, ‘He came up to me after the game and he told me how sorry he is, and he didn’t mean to hurt you,’ ” Finegan said.

“Everyone’s trying to make a play. I don’t hold anything against him. It’s part of a violent game and I’m in a vulnerable position at times.”