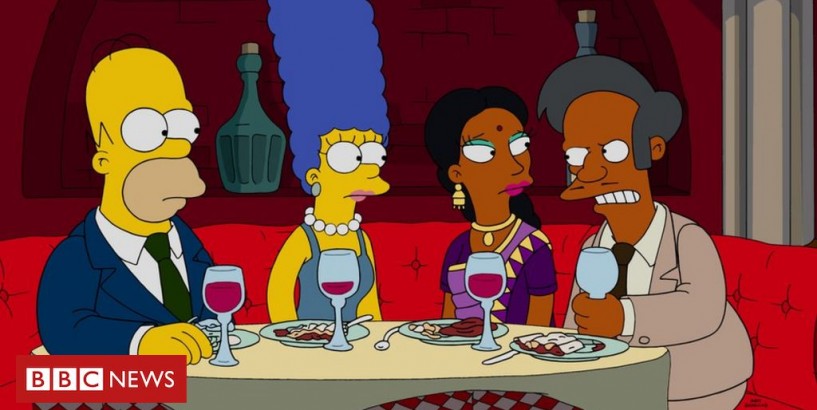 Simpsons ends use of white actors to voice people of colour

Simpsons ends use of white actors to voice people of colour 27 June 2020 Share this with LinkedIn Copy this link These are external links and will open in a new window Close share panel Image copyright TCFFC Image caption Actor Hank Azaria, the voice of Indian character Apu, said in January he was stepping down US animated comedy series The Simpsons will no longer use white actors for the voices of characters from other ethnic backgrounds, the show's producers say.

Mr Azaria said earlier this year that he was stepping down from the role.

The entertainment industry has come under growing pressure to provide more opportunities for non-white performers.

Friday's announcement comes in the wake of the Black Lives Matter protests, which were sparked by the death of African-American George Floyd in US police custody on 25 May.

"Moving forward, The Simpsons will no longer have white actors voice non-white characters," the producers said in a short statement.

In January, Mr Azaria said he would no longer be performing the voice of Indian convenience store owner Apu Nahasapeemapetilon, a role he had played since the character was created in 1990. Image copyright Getty Images Image caption Hank Azaria said it was important to "listen to Indian people and their experience"

"We all made the decision together... We all agreed on it. We all feel like it's the right thing," he said at the time.

The show had been accused of using the character in a way that reinforced racial stereotypes.

Mr Azaria - who provides the voice of other characters, including black police officer Lou and the Mexican-American Bumblebee Man - said he found it "very upsetting to me personally and professionally" that anyone felt marginalised because of Apu.

Fox Network's statement on Friday did not say whether Apu or other characters would continue to feature in the show. Not all Indians think Apu is a racist stereotype

Other white US actors to announce that they will no longer be providing voiceovers for people of colour include Mike Henry and Kristen Bell.

"I love this character, but persons of colour should play characters of colour," he tweeted on Friday.

Ms Bell, who provided the voice of Molly, a mixed-race child, in the cartoon series Central Park, said doing so displayed "a lack of awareness".

"Casting a mixed race character [with a] white actress undermines the specificity of the mixed race and Black American experience," she added. Related Topics