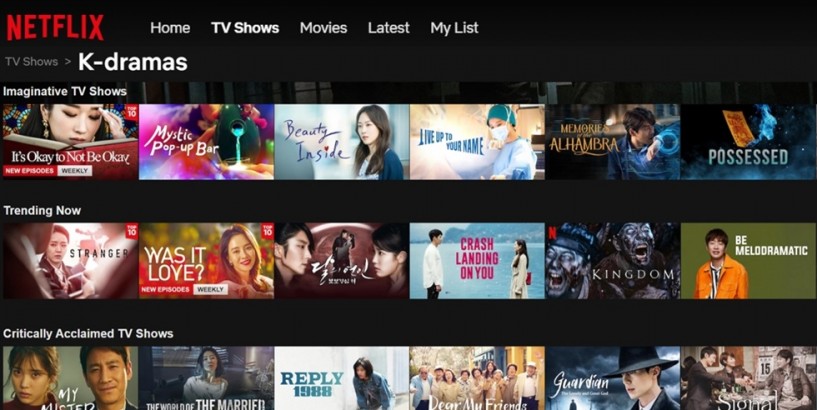 Netflix has a strategy to win over Korean content. Screen captured from Netflix

While the Korean TV drama industry is witnessing a rapid change in its success formula ― shifting its emphasis from the domestic scene to the global market ― streaming giant Netflix is playing a major role, offering lucrative deals and a doorway to international traction that local production studios cannot resist.

And local viewership is no longer a key metric.

The 32 billion won ($26.8 million) budget series reportedly recouped its total production cost from the broadcast deal with the SBS network and the overseas licensing agreement with Netflix, relieving pressure on the viewership rating in Korea.

"Netflix approaches with undeniable good deals, so probably most of the production studios want to work with the company," a local production company official told The Korea Times, asking not to be named.

Netflix launched in Korea in 2016 and has implemented aggressive investment strategies to expand local content and market penetration. Industry tracker WiseApp estimated that Netflix had 3.28 million subscribers in April ― up from 1.42 million in April last year.

In an effort to restrain Netflix from entering the domestic market, major terrestrial networks ― MBC, SBS and KBS ― made an informal agreement not to sell newly aired TV series to Netflix.

But the arrangement ended in 2018 when SBS Content Hub sold the streaming rights for "Hymn of Death" to Netflix, as advertisement revenue for the three-part miniseries was hard to generate. The series became available on the platform worldwide on the same day it aired on SBS.

Since then, Netflix has secured shows across the broadcasters, paying a big portion of the series' production costs through global licensing deals.

This year, several TV series ― tvN's "It's Okay to Not Be Okay" and "Crash Landing on You," JTBC's "Itaewon Class" and SBS's "The King: Eternal Monarch" and "Hyena" ― were sold to Netflix for worldwide streaming, available on the same day as their TV airing.

Korean media outfit CJ ENM and its subsidiary Studio Dragon even inked a three-year production and distribution agreement with Netflix to provide over 20 series and produce original series starting this year.

"Netflix values the power of storytelling as we believe it appeals beyond borders and across genres," Netflix told The Korea Times. "So, we intend to deliver Korea's high-quality storytelling to our audiences worldwide continuously."

Netflix picked up tvN's "It's Okay to Not Be Okay" to release on its platform on the same day as it was broadcast. Courtesy of tvN

And in doing so, the platform has become the most sought-after company to work with among local production companies.

"When we produce a series, making the budget is always hard for many reasons, especially with a low viewership rating," the official said. "So when Netflix purchases the license, it means we can just get on track with the production."

Thanks to Netflix, the production studios now have another source of earnings, rather than solely relying on the networks. And this frees the studios from tension with the local broadcasters and changes the dynamic of TV productions, says drama critic Yun Suk-jin, who is also a Korean literature professor at Chungbuk National University.

"The networks always dominated the production process as they are the ones assigning the timeslot," Yun said. "So (the productions) would have no choice but to accept propositions networks make ― regarding storyline, detail or concept of a series ― to stay favorable in getting TV schedules."

He said that since the networks cover only a portion of the production cost, ad revenue used to be another primary funding source for the studios.

"Especially, small productions will put in an excessive amount of product placement to make a profit, which will downgrade the quality of the series," Yun said.

JTBC's "Itaewon Class," left, and tvN's "Crash Landing on You" are streamed worldwide on Netflix. Courtesy of JTBC and tvN

Another factor that makes Netflix popular is worldwide streaming. This offers a series the chance to gain international traction and shortens the tedious export process.

"Being a global streaming giant has a substantial advantage in the market," pop culture critic Kim Hern-sik said, adding that it opens up a new model for content exports.

"In the past, the network or production company went 'door-to-door' with each overseas network to export a TV series," he said. "So it would take years and sometimes would fall apart along the long process, which would just be a waste of time and cost."

As Netflix is available in over 190 countries, the network can now utilize it to appeal to global markets, which will have a "great impact on possible deals for remakes overseas."

However, as the platform takes Korea by storm, its growing presence is also raising some concerns of excessive control over the local content market.

"Netflix receives so many content proposals, so they get to review and select which to work on and turn down," the production company official said.

The deep-pocketed company is likely to become the dominant source that monitors and selects the content available to audiences, shaping the market.

Netflix has also been accused of "freeloading" in Korea's OTT (over-the-top) ecosystem for refusing to pay local telecom companies for network service use in Korea. This is seen as an unfair advantage as other local streaming services ― such as Seezn, Wavve and Watcha ― are obliged to pay.

A scene from tvN's drama "Hotel Del Luna," which will be remade in the U.S. Courtesy of tvN

Meanwhile, Studio Dragon is seeking to go beyond Netflix to secure its foothold in the global market. The company launched a U.S. branch earlier this year, becoming the first Korean production company to do so.

It inked a co-production partnership deal with the American production company Skydance in February, announcing their first project, a U.S. remake of "Hotel Del Luna."

"With the success of 'Hotel Del Luna,' we hope to leap forward in becoming a global premium drama studio," Studio Dragon said.