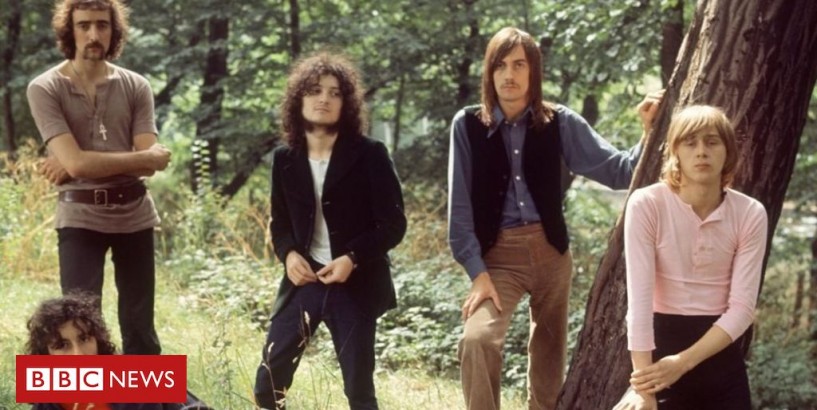 Fleetwood said they had "trail blazed one hell of a musical road for so many to enjoy".

And Stevie Nicks, who joined the band five years after Green quit amid struggles with his mental health, said her biggest regret was not having shared a stage with him.

Green, 73, died peacefully in his sleep, his family said on Saturday .

Fleetwood said: "For me, and every past and present member of Fleetwood Mac, losing Peter Green is monumental.

"No-one has ever stepped into the ranks of Fleetwood Mac without a reverence for Peter Green and his talent, and to the fact that music should shine bright and always be delivered with uncompromising passion."

The 73-year-old added: "Peter, I will miss you, but rest easy your music lives on. I thank you for asking me to be your drummer all those years ago. We did good, and trail blazed one hell of a musical road for so many to enjoy.

He wrote the instantly recognisable instrumental track Albatross, which remains the band's only number one hit, plus two other early hits, Black Magic Woman and Oh Well. And it was under Green's direction that they produced their first three albums.

Green left the band after a last performance in 1970 as he struggled with his mental health. He was eventually diagnosed with schizophrenia and spent time in hospital in the mid-70s.

Singer Nicks joined Fleetwood Mac with her then-boyfriend Lindsey Buckingham in 1975 and the band became one of the most successful in the world.

"I am sorry to hear about the passing of Peter Green. My biggest regret is that I never got to share the stage with him. I always hoped in my heart of hearts that that would happen," she said.

"When I first listened to all the Fleetwood Mac records, I was very taken with his guitar playing. It was one of the reasons I was excited to join the band.

"His legacy will live on forever in the history books of Rock n Roll. It was in the beginning, Peter Green's Fleetwood Mac and I thank you, Peter Green, for that. You changed our lives." Image copyright Getty Images Image caption Mick Fleetwood, Stevie Nicks, Lindsey Buckingham, Christine McVie, John McVie in 1975

David Coverdale, the lead singer of Whitesnake, is among other musicians to pay tribute to a "truly loved and admired" artist.

In a tweet , he said: "I supported the original Fleetwood Mac at Redcar Jazz Club when I was in a local band... he was a breathtaking singer, guitarist and composer. I know who I will be listening to today. RIP"

Mumford and Sons guitarist Winston Marshall tweeted: "RIP Peter Green. #GOAT. Man of the world, oh well, albatross, need your love so bad. Some of my favourites songs and performances of all time. Thank you for the music."

Actor David Morrissey praised Green's "fantastic soulful voice" while Black Sabbath's Geezer Butler described Green as "one of the greats". And Scottish musician Midge Ure tweeted: "One of the great ones gone. You taught me well."

The singer-songwriter Cat Stevens, now known as Yusuf Islam, tweeted: "God bless the ineffable Peter Green, one of the unsung heroes of musical integrity, innovation and spirit. When I heard he left Fleetwood Mac in 1970 to get a real life and donate his wealth to charity, he became something of a model for me."

Peter Green was one of the greatest Blues guitarists Britain ever produced. His shape-shifting riffs and long, improvisational excursions made Fleetwood Mac one of the most exciting live bands of the 1960s Blues explosion.

He first picked up a hand-me-down guitar at the age of 10 and, like many of his peers, began to devour the import vinyl that trickled into the UK from the US. He studied the greats - Muddy Waters, Buddy Guy and BB King - combining their tensely coiled playing style with the shimmering vibrato of The Shadows' Hank Marvin.

But he actually started his professional career as a bassist, until an encounter with Eric Clapton persuaded him to ditch the instrument.

"I decided to go back on lead guitar after seeing him with the Bluesbreakers. He had a Les Paul, his fingers were marvellous. The guy knew how to do a bit of evil, I guess."

He later had the seemingly impossible task of taking over from Clapton in John Mayall's Bluesbreakers. Fans were unconvinced at first, but after a handful of incendiary performances, he won them over, earning the nickname "The Green God".

Rolling Stone magazine ranked Green at number 58 in its all-time list of the 100 greatest guitarists , describing him as "Britain's most progressive blues guitarist" in his heyday.

He was among the eight members of the band - along with Fleetwood, Nicks, Buckingham, Spencer, McVie, Christine McVie and Danny Kirwan - who were inducted into the Rock & Roll Hall of Fame in 1998.

The news of his death comes days after Fleetwood Mac announced they would release a retrospective box set documenting the band's early years between 1969 and 1974.

Green married Jane Samuels in January 1978. They divorced in 1979 and have a daughter. Related Topics