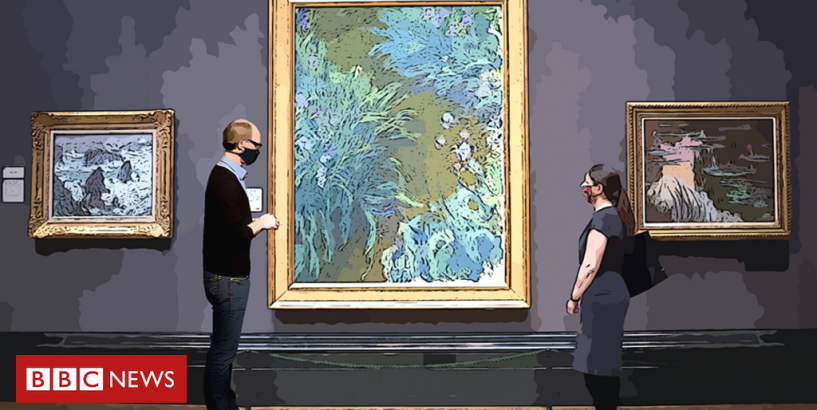 I missed an appointment the other day because it took me 10 minutes to figure out how to leave Broadcasting House. My place of work has changed a bit since I last set foot in W1A pre-lockdown. A one-way system has been introduced to allow for social distancing, which is a good idea. That the job was given to a brilliant escape-room game designer is evidence that someone, somewhere has a mischievous sense of humour.

Still, better get used to it.

One-way is the new way nowadays. Supermarkets, coffee shops, and now arts venues have all gone down the same one-way street.

The National Gallery in London was the first of the major national museums to reopen to the public on Wednesday, offering a lockdown-easing visitor experience that is markedly different from the pre-pandemic wander-at-will affair.

It is still free to see its collection of world-class paintings but tickets have to be booked online for a specific day and time. Once in the gallery you are encouraged to wear a face covering, use the hand sanitiser stations, and choose from one of three prescribed one-way routes: A, B or C (you can do them all if you want).

Image copyright National Gallery, London Image caption To help maintain social distancing, the National Gallery has devised a strict one-way system with three routes Each trail takes around 30 minutes and features hundreds of stunning paintings. All three options are something of a smorgasbord of styles and epochs, but broadly speaking route A focuses on Italian paintings, route B is more Flemish and Dutch, and C is German and British.

There are way-finding arrows on the floor which double-up as two-metre markers for social distancing. They work well on the whole, but become a little confusing when the B and C routes converge. I was whisked off in the direction of Lucas Cranach the Elder's mean-mouthed masterpieces when I'd set my sights on the swirling Baroque of Peter Paul Rubens.

The defined routes are like motorways, once you're on one you have to go with the flow until the next exit, which in this case, is the exit.

That said, there are plenty of visor-wearing gallery assistants to ask for directions. They are very helpful as long as you don't try to swim against the tide; if you do they'll read you the riot act (moon walking won't fool them, I tried).

Fair enough. The safety of visitors and staff alike is paramount, and with levels of anxiety running high, the gallery can't afford to have people going off-piste. The digressive pleasures of gallery-going have gone, for the time being at least.

The new normal is the curated walking tour, which, it turns out, has a lot going for it.

It is helpful, for instance, if you're not a regular at the National Gallery, which can be overwhelming: which way should you turn, what should you see?

Now, you can't go wrong, each of the three routes serves up room after room of exquisite paintings, contextualised within their period and style. Take your pick: do you fancy a gallery full of Rembrandts or one chock-a-block with Holbein's (my advice, go around twice, see them both).

Image copyright National Gallery, London Image caption The Ambassadors (also known as Jean de Dinteville and Georges de Selve), 1533 by Hans Holbein the Younger is on route C Route A is the shortest and has fewest pictures, and conveniently takes you back to the starting point for all three options, unlike B and C which both finish with the Impressionists and a five-minute hike back to the beginning if you want to try another option. It also features some wonderful pictures including Leonardo da Vinci's Virgin of the Rocks, Jan van Eyck's The Arnolfini Portrait, and Piero della Francesca's The Baptism of Christ, which is one of the most exceptional paintings you will ever set eyes upon.

Image copyright National Gallery, London Image caption The Virgin of the Rocks (1491 - 1508) by Leonardo da Vinci is on route A Route B is just as good.

Not only has it the aforementioned rooms dedicated to Rubens and Rembrandt (including the splendid A Woman bathing in a Stream, and a very late, very moving self-portrait), but also Velázquez's The Toilet of Venus, Seurat's magnificent Bathers at Asnières, and Caravaggio's Supper at Emmaus.

Image copyright National Gallery, London Image caption A Woman bathing in a Stream (perhaps Hendrickje Stoffels), 1654 by Rembrandt is on route B Does that mean Route A is the weakest link? Absolutely not.

It has Turner's The Fighting Temeraire, Constable's The Hay Wain, and Joseph Wright of Derby's An Experiment on a Bird in the Air Pump. And that's just a few of the Britons.

Elsewhere, you'll also see Van Gogh's A Wheatfield with Cypresses, Holbein's The Ambassadors, and Bruegel's Christ and the Woman taken in Adultery.

Image copyright National Gallery, London Image caption JMW Turner's breathtaking painting The Fighting Temeraire is on route A Image caption A visor-wearing National Gallery assistant looking at Vincent van Gogh's A Wheatfield, with Cypresses, 1889, which is on route A It's like a feast of all your favourite dishes, served at once, leaving you with no choice other than to gorge yourself until you can't take any more.

Maybe it is too much, but it's difficult to see what more the National Gallery could do in the current circumstances. It has clearly thought long and hard about how to best display its collection in a manner that will give the greatest access to its greatest pictures, while also giving confidence to the public visiting at a time when Covid-19 still lurks ominously like the black spot of syphilis in Hogarth's famous moralising satire Marriage A-la-Mode (route C).

Image copyright National Gallery, London Image caption Marriage A-la-Mode: The Inspection is the third in a series of six satirical works by Hogarth, which shows the terrible consequences of marrying for money rather than love I was just happy to be back among one of the finest fine art collections in the world, and grateful to all of those who have made it possible. It felt safe enough, and the few small teething problems are insignificant compared to the show that has been put on in such a challenging climate.

Welcome back the National Gallery. And congratulations for finding an intelligent solution to a difficult situation: turning expert curators into art-route planners might be more than a quick fix, it could be the future.

Recent reviews by Will Gompertz

What links Kanye's video artist and an exile from Nazism? Will Ferrell is a Eurovision flop ★★☆☆☆ Rough but not Rowdy: Dylan's new album is a masterpiece Extraordinary novella of lockdown life created 100 years ago Follow Will Gompertz on Twitter