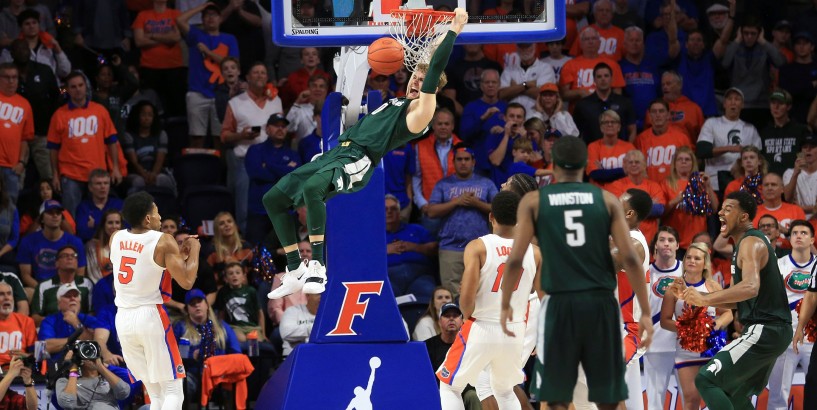 GAINESVILLE, Fla. — When Kyle Ahrens is overcome with exhaustion late in a game, he looks over at Michigan State’s bench, his old home, and grits his teeth. “There are glimpses in my mind, ‘Would you rather be on the bench again? Or would you rather be tired right now?’” Ahrens asks himself. “I’m pushing myself through it.” The bench, to Ahrens, represents injury and frustration and precious time wasted. He is free from that now. And for the first time in his MSU career, he has a role that affects winning. Never, in three-plus years, as much as he did in Saturday’s 63-59 win at Florida. When he picked up a loose ball, drove to the basket and threw down a two-handed dunk with 9.4 seconds left Saturday, giving the Spartans the four-point winning margin, it was his seventh point of the game, all in the final 3:03. All of them essential. His 3-pointer with 3 minutes left was immediately countered a 3 by Florida’s KeVaughn Allen. The next trip down the floor, after Florida had scored again, Ahrens drove the baseline and scooped in a reverse layup. All of this as Florida was starting to land some blows and MSU point guard Cassius Winston, running out of gas, was beginning to stagger. MSU needed someone to make a play. Several of them. And Ahrens, at his best, is an ideal mix of selfless role player and capable playmaker. “There are a lot of emotions going through my head right now,” Ahrens said. “Just where I came from last year to being in this moment, I’m ready for the next game and to get it going.” Who Ahrens was at the end of Saturday’s game — and has been for much of this season — does not surprise the coaches who recruited him. “The Kyle Ahrens that you see now is the Kyle Ahrens that you couldn’t see because he was always injured,” MSU assistant coach Mike Garland said. “Those athletic plays, Kyle is athletic. People don’t really realize that, he’s athletic. We recruited this dude — like he dunked over them guys, and he’s done this is a couple other games — that’s who he was. That’s why we brought him in.” A foot injury (and two foot surgeries) similar to the injury that derailed Russell Byrd’s career, which followed a leg injury that cost him the end of his high school career, defined Ahrens’ time at MSU until now. He played rather than redshirting as a true freshman because he didn’t want to miss any more time. Then, with the foot injury, wound up missing last season. “Having Russell (working out with the team) this summer was impactful for me,” Ahrens said. “He always talked to me, he always checked how I was doing. Just to learn from him and the emotions he went through, it was great to be around him this summer.” In Byrd’s case, the injuries eventually won, preventing him from living up to his billing, from being the athlete he knew himself to be. Ahrens’ finish at MSU could be different. “That dunk I had, that’s my high school days,” he said. “Just raising up like that. My body feels way better than my freshman and sophomore years, my joints, everything.” “He’s waited a long time to have a day like this,” MSU coach Tom Izzo said. “It seems like it’s been forever. So I take my hat off to him.” This isn’t just some feel-good story perfect for a non-conference Saturday in December. I’ve written plenty of those columns. Nor was Ahrens’ poise late in the game a right-place, right-time accident. This is who he likely is. We just haven’t seen it yet. “Growing up, my dad always harped on that, bringing the energy, toughness especially. Especially where I come from,” Ahrens said. Where he comes from is Versailles, Ohio, a small village of less than 3,000 people. Proud people. When I haven’t given Ahrens the credit he’s been due at times previously, I’ve heard from some of the townsfolk. “We don’t have any fast food restaurants around us. A bunch of farmers,” Ahrens said. “We’re just very poised over there, very strong. I had buddies waking up at 4:30 in the morning just to get a lift in.” MSU’s coaches trust Ahrens completely. “He’s tough. Not only is he athletic, he’s tough,” Garland said. “He’s mentally tough and he’s physically tough. Tough.” Ahrens, affectionally called “Arnie,” is an ideal fit for this roster. He doesn’t need to score to contribute. Doesn’t require the ball in his hands to be happy. But can score when it’s needed. And can do so in a couple different ways. His athleticism, strength and seasoned understanding of time and score gives MSU a veteran in a role that would otherwise be occupied solely by freshman Aaron Henry. “It’s a long process,” Ahrens said. “Those who stay, you will get your chance.” Contact Graham Couch at gcouch@lsj.com. Follow him on Twitter @Graham_Couch.