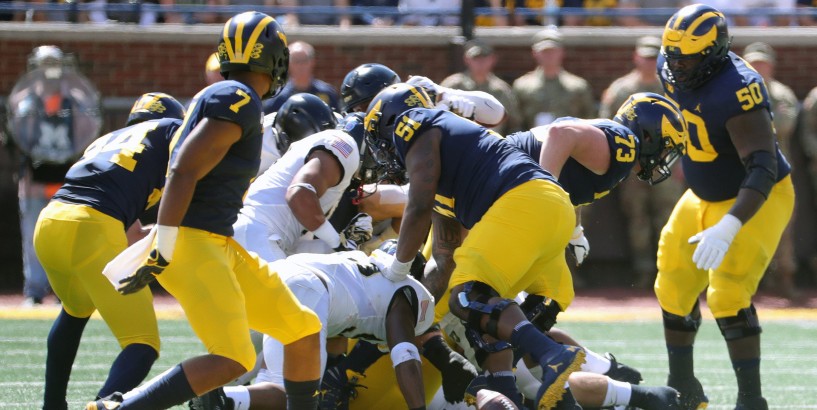 Michigan offense hasn't measured up to 'Speed and Space' anticipation

After two games, what can we say about Michigan’s new “Speed in Space” offense? It has been more “Fumbles and Frustration” than anything else. This offense hasn’t produced as anticipated under new offensive coordinator Josh Gattis, and the Wolverines were flat-out lucky to beat Army, 24-21, in double overtime on Saturday in Michigan Stadium. It feels like an old bait-and-switch. All summer, the Wolverines talked about their high-flying up-tempo offense. They talked about scoring points, RPO plays, getting the ball to their playmakers and bringing their offense into this century. But they needed a fake punt against Army to spark their offense, and scored just 14 points in regulation. Instead of airing it out and utilizing their speedy wideouts, who had a distinct athletic advantage against Army’s secondary, they gave the ball 33 times to a freshman running back, Zach Charbonnet, who rushed for exactly 100 yards. That’s Speed in Space? It’s more like "Back to the Past" — 3 yards and a cloud of rubber pellets. The main problem has been turnovers and penalties. It’s hard to score when you keep dropping the ball. Michigan fumbled three times Saturday and had nine penalties for 58 yards. The Wolverines have fumbled five times in two games — two more than all of last season combined. Speed in Space is apparently the thing you see when they are scrambling to try to recover a fumble. Michigan quarterback Shea Patterson was the main culprit. He fumbled twice in the first quarter alone. One was on him — he was simply too careless with the ball. “We missed a protection up the middle,” Michigan coach Jim Harbaugh said. “You can’t be that loose with the ball.” The other fumble was on a running back who didn’t pick up a blitz. “They came with a corner blitz and our running back didn’t see it and it got stripped,” Harbaugh said. To be fair, not all of this is on Gattis. There were plays to be made, but the Wolverines didn’t make them. Michigan blew a touchdown opportunity when Patterson overthrew Ronnie Bell, who was running wide open through Army’s secondary. Nobody was within 5 yards of him. "I would say the wind took it,” said Bell, who finished with seven catches for 81 yards. “He saw me. We have been clicking, all camp, all practice.” They missed another chance when they dialed up a play that looked like a touchdown, but Tarik Black dropped a pass near the goal line. Michigan’s best offensive play? A fake punt. And I think that says everything. Michigan didn’t win because of its offense. It won because of its defense. The Wolverines won because Army had a penalty at the goal line, decided to throw it and Lavert Hill intercepted it. They won because Army’s kicker missed a 50-yarder at the end of regulation. If the Black Knights had converted that kick, Michigan fans would be in full panic mode right now. The Wolverines won because defensive coordinator Don Brown dialed up some magic in overtime. "That’s how you fight,” Harbaugh said. “That’s how you scratch and claw — both teams did that.” True. But there were lots of questionable calls to ponder. Twice, the Wolverines failed on fourth downs. Harbaugh went all new school, blaming the analytics department. “Our analytics had it, the best thing to do if we got into fourth-and-3 from that distance, was to go for it,” he said. “We didn’t convert. Same with the second one.” Not converting? That is sounding like a broken record at this point. If there has been a positive to this season, it has been Charbonnet. “I felt we had to lean on Zach today,” Harbaugh said. “Ben (VanSumeren) fumbled and we had another (back) who missed a protection. I felt we had to go with Zach, more than we wanted to.” So that is one of Harbaugh's goals heading into the bye week. He wants to find a second back. “It’s tough duty, going a whole game on a hot day," he said. "Give the kid a lot of credit. He rose to the occasion and had to be tired.” In the end, the Wolverines needed some luck to beat Army. That won't work against Wisconsin. Nothing about this offense will. Not if they can’t hold onto the ball. Contact Jeff Seidel: jseidel@freepress.com. Follow him on Twitter @seideljeff. To read his recent columns, go to freep.com/sports/jeff-seidel.