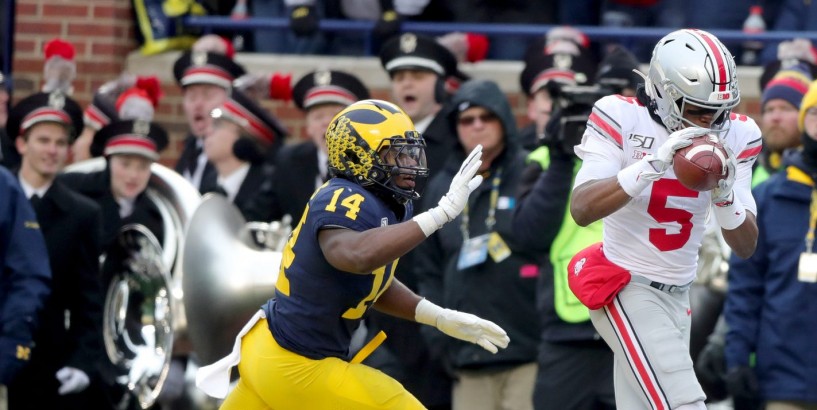 It was hard for Aidan Hutchinson to contain his disappointment. Shortly after Michigan's 56-27 loss to Ohio State on Saturday , Hutchinson sat at a podium to answer familiar questions about why the Wolverines couldn't stop the Buckeyes. As the junior defensive end did his best to answer those queries, a stack of paper sat in front of him — the post-game stats. Hutchinson glanced over the numbers a couple times: 56 points, 577 yards, 28 first downs and 7.5 yards per play. He shook his head. There was nothing much to say. “It’s hard to look at," Hutchinson said. "We’re just a better defense than this, we’re a better team than this. We’re a lot better than the numbers on this sheet.” All season long, the Wolverines were motivated by last year's 62-39 loss at Ohio State . They were even given shirts that bore the score of that game. Everything Michigan did over the offseason – and during the season – seemed to be in preparation for the Buckeyes. But in the end, none of it mattered. "We made some mistakes," said Jim Harbaugh, "and they executed very well.” Despite quarterback Justin Fields' shaky start (he completed just two of his first seven passes), the Buckeyes scored on four of their first five drives. The key: a strong run game, led by J.K. Dobbins, who rushed 31 times for 211 yards and four touchdowns. The Wolverines simply didn't have any answers up front; time after time, Dobbins had open lanes to run through. And when he didn't, he had the ability to shake defenders and gain extra yardage. “He’s a really good back," Harbaugh said of Dobbins. "He’s got tremendous ability. He’s very fast. We made some mistakes in the defense. That particular play, we didn’t have an edge, we got sucked down inside. Had a soft edge and ran around us.” “We’ve had a great run defense over the last six, seven games," said linebacker Jordan Glasgow. "I don’t really know. But the fact that they were able to gain so much was surprising. And obviously I don’t know the reason for that, we’re gonna have to look at the film." As the game continued, mistakes piled up. The Wolverines appeared to blow a coverage on Ohio State's second touchdown, a 57-yard pass from Fields to receiver Chris Olave. Michigan gave up a 41-yard catch-and-run on second-and-19. And in the third quarter, it called timeout on third-and-goal at the 6 to get properly aligned – only for the Buckeyes to score. The result was a sharp turn from what Michigan's defense had shown over the past month. The Wolverines could play a variety of pass coverages, get after the quarterback and stop the run. Many of those changes were spurred by last year's devastating loss in Columbus, when the Buckeyes beat Michigan's man coverage over and over again. This time around, the Wolverines didn't lose because they couldn't stop short crossing routes. But the overall outcome still looked the same: Ohio State dicing up U-M's defense with ease. After the loss, Hutchinson fervently expressed his belief that Michigan's issues were related to execution, and not scheme. "We just gotta execute better," he said. "That’s what it comes down to at the end of the day. I thought we were prepared well. I thought we knew everything that we saw – we just gotta be better, it’s simple. That’s all it is. It’s not scheme, we just gotta execute. That’s it.” That may be true. But it isn't any consolation for the Wolverines, who were left to give the same answers to the same questions. "We gotta dig down next year, see what we got," Hutchinson said. "You’re not gonna win ballgames when you're letting up 50 to 60 points. It’s not gonna happen. So, we gotta be better.” Contact Orion Sang at osang@freepress.com . Follow him on Twitter @orion_sang . Read more on the Michigan Wolverines and sign up for our Wolverines newsletter .