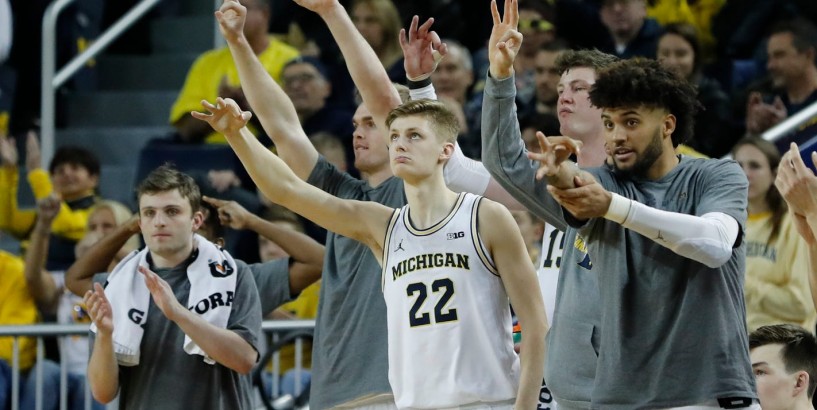 Washington native Cole Bajema is headed back to the Pacific Northwest after just one season in Ann Arbor. The Michigan guard, who entered the transfer portal earlier this month, announced via Twitter on Saturday night that he is transferring to Washington. Bajema's tweet: "First of all, I want to thank the University of Michigan and all the fans for all the support. I am grateful for all the relationships and memories I have made there. After careful consideration, I am excited to announce I will be committing to the UNIVERSITY OF WASHINGTON. Go Dawgs!" The 6-7, 175-pound guard originally committed to Michigan when John Beilein was head coach. New coach Juwan Howard moved quickly to ensure the four-star recruit stayed committed to Michigan. Bajema played in just 10 games under Howard, averaging 2.6 points a game and totaling 37 minutes. His best game came against Presbyterian in December, when he scored nine points in 11 minutes. The Lynden, Washington, native went from an unranked prospect to a four-star recruit in a matter of weeks as he and Michigan circled each other in summer 2019. Bajema's departure highlights a possible issue for Michigan next season at guard. After the departure of Bajema, Zavier Simpson (graduation) and David DeJulius (transfer to Cincinnati), the Wolverines will have just four scholarship players who can play point guard or shooting guard next season: Eli Brooks, Adrien Nunez, grad transfer Mike Smith, and incoming freshman Zeb Jackson. Earlier this month, Purdue guard Nojel Eastern announced his intention to transfer to Michigan, but it appears likely he will be required to sit out the 2020-21 season under NCAA regulations. Washington went 15-17 last season in coach Mike Hopkins' third season in Seattle. The Huskies' last-place finish in the Pac-12 — and loss in the first round of the conference tournament — came despite having two possible first-round NBA draft picks in freshmen Isaiah Stewart and Jaden McDaniels. Free Press sports writers Rainer Sabin and Orion Sang contributed to this report. Contact Ryan Ford at rford@freepress.com . Follow him on Twitter @theford .