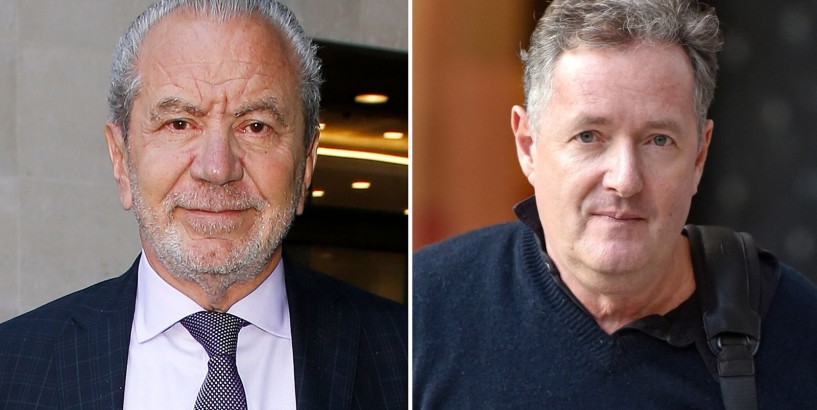 Speaking to Sarah-Jane Mee on her new Sky News podcast In This Together, The Apprentice star said: "He's just gone completely over the top and in the early stages of [the COVID-19 pandemic] scaremongering, and his constant hammering of the government is absolutely irresponsible and disgusting to be honest."

Image: Lord Sugar appeared on Piers Morgan's Life Stories When asked by Mee whether their friendship was beyond repair, Lord Sugar said: "I basically don't care really, to be perfectly frank. I think he's enjoyed it, enjoyed trying to make a name for himself.

"When this is all over who knows. Do I care? No. I couldn't give a damn to be honest with you. But I'm not going to stand by and remain silent when I see him spewing out so much rubbish unfairly against the government."

Clarifying his political position, Lord Sugar added: "Let me make it perfectly clear, the government's not perfect, mistakes have been made and they're learning as we're going along."

Advertisement :: Listen to Coronavirus: In This Together on Apple Podcasts , Spotify , or Spreaker

The 73-year-old's sparring with Morgan , 55, began in 2007, when the journalist took part in a charity version of The Apprentice, and was swiftly fired by the businessman.

They have locked heads many times over the ensuing years, with their public spats frequently playing out on social media.

Up until now, the bickering has been in relatively good spirits, and to prove the point, just last year Lord Sugar appeared on Piers Morgan's Life Stories.

Image: Morgan was not impressed with Lord Sugar's Twitter followers dig Last year they even holidayed in the south of France together.

However, their love-hate relationship took a turn for the worse earlier this year, after Morgan spoke out against Boris Johnson's government for its handling of the coronavirus pandemic .

And just this month, Lord Sugar riled his ex-pal after asking him if he'd "been buying followers" on Twitter . Morgan has 7.5 million followers, while Lord Sugar has 5.3 million.

Morgan has since described Lord Sugar as "a former friend".

Assessing the government's management of the global health crisis thus far, Lord Sugar admits: "We've got caught with our trousers down, so to speak.

"I mean no one has ever been through anything like this and we have to learn as we go along what to do and I think it's unreasonable to expect that the government should be fully aware of what they need to do.

Image: Morgan's been critical of the handling of the crisis on both sides of the Atlantic Lord Sugar also praised the resourcefulness of the nation's businesses throughout the lockdown.

"That's the resourcefulness of the entrepreneur or good business people to realise what they can do rather than sit back and moan, just to get on and do something about it.

"Restaurants have been doing takeaway for example, some people have jumped on the bandwagon of making masks, some people have realised that there is a business to be had in the healthcare industry, so they've adapted very well and good luck to them."

The full interview with Lord Sugar is included in Mee's In This Together podcast, which aims to celebrate uplifting moments during the coronavirus outbreak.

#InThisTogether is available on Spotify, Apple Music and wherever you listen to your favourite podcasts.