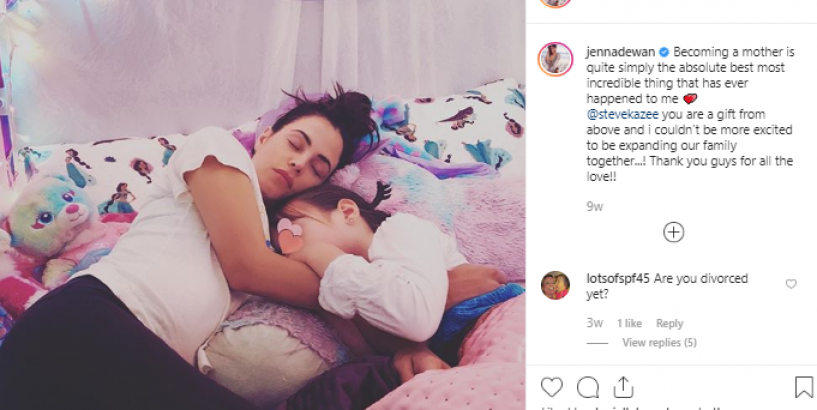 Actor Jenna Dewan has more than one reason to be grateful this Thanksgiving Day. The 'Flirty Dancing' host not only has the most loving beau Steve Kazee by her side but she is soon going to be a mother of his child as well.

On Thanksgiving Day, Dewan and Kazee had spent quality time with their family to commemorate the day. The would-be parents gave a sneak peek into their celebration of the day on their respective social media accounts. In one picture the couple can be seen in matching outfits where Kazee is seen cradling her lady love's baby bump.

"Thankful. Hope everyone had a wonderful day with their friends and loved ones! "Happy Thanksgiving!" Kazee captioned the adorable picture. Dewan was quick to notice the post and commented on the snap, "We are that couple that matches for our pictures and I'm here for it."

Dewan and Kazee expecting their first child together

On Thanksgiving Day, Dewan and Kazee had spent quality time with their family to commemorate the day Twitter/Jenna Dewan In September, the actress announced that she was expecting her first child with boyfriend Kazee. She took to social media to share the news alongside a photo that showed off her baby bump. Dewan can be also be seen cuddling with her daughter Everly whom she shares with her ex and actor Channing Tatum.

"Becoming a mother is quite simply the absolute best most incredible thing that has ever happened to me. Steve Kazee you are a gift from above and I could not be more excited to be expanding our family together. Thank you guys for all the love," she captioned the beautiful picture.

Instagram This will be Kazee's first child while Dewan is already a mother to a six-year-old daughter. Reportedly, Dewan and Kazee started seeing each other in 2018. However, it was Dewan who made the relationship official on Instagram in June.

Also, it was in the same month that the couple made their official debut at WWE's Monday Night Raw. "Jenna and Steve are crazy about each other and have a great relationship," a source had shared with E! News. "He is very mature and there is no drama. It is just easy and comfortable," the source further revealed.