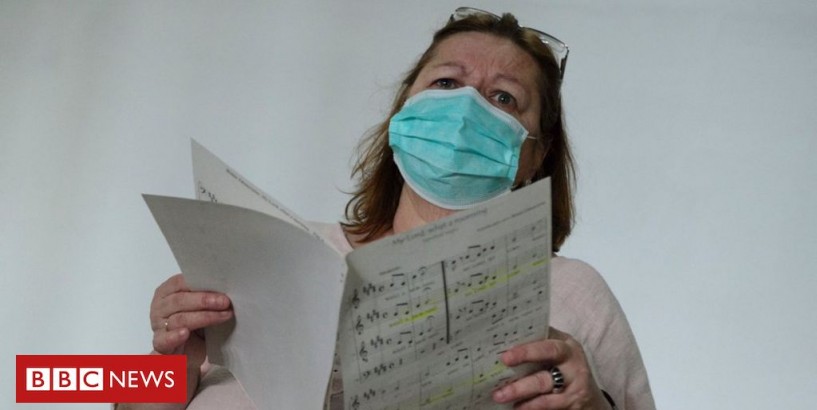 Is it safe to sing yet?

Image copyright Getty Images Image caption A singer in Spain returned to her choir after lockdown was eased last month but wore a face mask You've heard of songs being catchy before - but never like this...

It is a strange sight. The room is a particle-free operating theatre, filled with computers and hi-tech sensors. Everyone is wearing medical scrubs, masks and protective equipment and in the middle is a man playing Happy Birthday on a trombone.

These are the scientists and musicians trying to work out how dangerous it is to allow singing and playing instruments in public.

From the beginning of August , music venues and theatres in England will be allowed to open again - but there are big questions about how safe and how viable it will be.

The World Health Organisation announced on 8 July there was evidence that Covid-19 might be spread by tiny particles of moisture that can hang in the air in enclosed or unventilated spaces. It was a response to a group of more than 200 scientists from 32 countries who had written an open letter saying the possibility of airborne transmission was being underestimated.

The question is: What do we actually know about these clouds of exhaled breath, known as the aerosol? The answer is being revealed in a study that has been championed by Declan Costello, a surgeon who specialises in treating singers.

"We need this research so that the government can look at the numbers that we generate and then decide if the restrictions we have put in place are necessary, adequate or they can relax or have to tighten the restrictions," he tells the BBC.

"There is a lot of anxiety about singing, a worry that it is a potentially dangerous activity."

"This research is important for musical venues across the world."

The Happy Birthday Study Inside the research lab, singers wearing medical scrubs sing and play Happy Birthday down a tube, over and over again. What is being measured is exactly how many tiny droplets are being exhaled and how far they travel.

Professor Jonathan Reid, who is leading the study by Bristol University and Imperial College, explains: "The coronavirus is transmitted by both large droplets and possibly by very small aerosol particles as well - and if someone is generating aerosol that is a mode of transmission, possibly."

"The big droplets are around the diameter of a human hair and they settle out under gravity very quickly within one to two metres. But the much smaller particles can be airborne from minutes to hours."

Image caption The spread of aerosols is being measures scientifically Singers and musicians are weighed to see if larger people emit more breath vapour. Everything is being measured to see if talking and singing are different, if volume alters the output and how much is emitted from simply breathing.

Funded by the UK government, the research is seeking to bring some hard facts to a debate about how far we should be standing apart.

This is going to make many performances impossible.

If the chorus at the Last Night of the Proms had to stand side-by-side then Rule Britannia would begin in the Royal Albert Hall and stretch all the way down to the Natural History Museum, almost half a kilometre away.

If the research can show that the amount of aerosol coming out of singers and brass instruments is no greater than people chatting in a pub, then it could allow the guidelines to be relaxed and help live music to return.

However, there is another problem - the economics of social distancing.

Image copyright AFP/Getty Image caption This choir in Lithuania rehearsed last month observing social distancing rules Image caption Results of the study are not expected to be published until the autumn The Manchester music venue Band on the Wall has, like every other venue in the UK, been closed since the lockdown.

However, its owners have decided that, rather than opening at the beginning of August, they will instead close their doors for a year and refurbish the club.

"Either the younger crowds as soon as they've had a drink they just want to get together and get that gig experience and older crowds just don't want to come at all," he says.

"No-one's touring, all the tours for September are cancelled," he observes. "We are absolutely dependent on that supply of artists touring."

So, while the government has given music and theatre the chance to re-open, the number that actually do open their doors with all the restrictions and uncertainty is unlikely to be anything close to normality.

Many will be waiting to find out the results of Professor Reid's study. Unfortunately, those are unlikely to be ready for publication until the autumn.