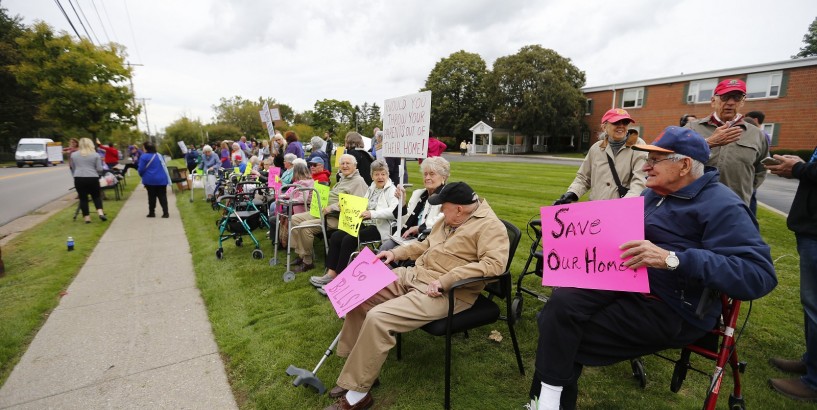 Holding signs reading "I'm old, not senile," "Would you throw your parents out of their home!" and – off topic, but on point – "Go Bills!" residents of Blocher Homes took their fight against the facility's closing public on Monday.

A group of more than a dozen seniors, including 104-year-old Hilda Allen, were joined by union employees and neighbors who also oppose shutting down the Williamsville assisted living residence.

The informational picket outside 135 Evans St. drew at least 50 people, with younger protesters marching and standing along the roadway urging passing motorists to honk their horns in support.

"I have lived here about four years," said Arlene Bolton, president of the Blocher resident council. "This is my home."

Blocher's parent, Beechwood Continuing Care, and People Inc. in midsummer announced that the century-old Blocher would close to make way for mixed-income apartments.

Beechwood officials say they understand how passionate Blocher's residents are about the facility and its services. But they say they can't afford to continue to operate the facility in the current senior care climate, and housing for low- and middle-income renters is badly needed in this area.

"We have no choice but to repurpose the Blocher Homes," Daniel O'Neill, president and CEO of Beechwood and its affiliate, said in a statement Monday.

Residents aren't the only ones who have raised concerns about the project. Neighbors say the proposed development is too dense for this neighborhood and would bring too much traffic and noise.

Resident Hilda Allen, 104 years old, makes clear what will have to happen for her to leave Blocher Homes. (Mark Mulville/Buffalo News)

And the 60 or so employees of Blocher, including about 18 represented by 1199SEIU, worry about losing their jobs.

"I've never met a better group of people in my life," said Janice Nichter, a personal care aide at Blocher for 19 years and the chief delegate for the facility's union employees. "They're breaking up a family."

The protesters seemed to be in good spirits on Monday. They said they hoped the public attention to their cause would help them stop the development.

The proposal requires village and state approvals. The Williamsville Planning Board was set to continue its review of the project at Monday night's meeting.

"I think the people are on our side," said Hilda Allen, at 104 Blocher's senior resident.

The sign she held in front of her as she sat for the protest read, "I'm leaving here feet first."