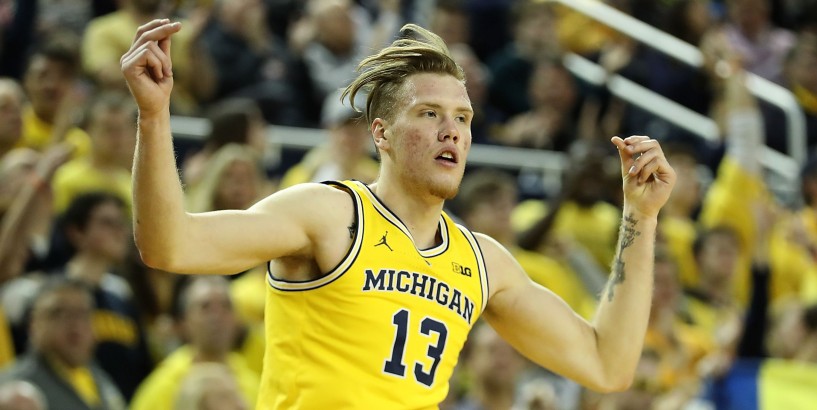 Zavier Simpson poked the ball loose, picked it up on the run and flicked the fast-break lob to Isaiah Livers. Livers rose up from the right side, caught the ball in midair and slammed it through the hoop over a helpless defender. The alley-oop connection put No. 4 Michigan ahead, 68-45, over Air Force with 3 minutes to play. More than that, though, it provided a statement by the Wolverines. On the strength of a 43-point second half and 53 percent shooting, U-M (12-0) ran away from the Falcons, 71-50 , on Saturday at Crisler Center in a dominant showing. But the Wolverines had only a seven-point lead at halftime, making just 26.7 percent from the 3-point line. “We went in after that first half, just (coach John) Beilein just telling us, 'Why are you guys thinking so much before you shoot the ball?’ Shoot the ball with confidence,” Livers said. “ .... When you get words from your head coach that say, shoot the ball with confidence, you're going to see the ball go in.” But the tide soon turned. Starting with a fast-break layup from Eli Brooks, Michigan scored three straight buckets off of opponent turnovers, and when Jordan Poole drained a corner 3 for a six-point lead, it was fully in control. That’s exactly what happened after intermission. Poole, Livers and Ignas Brazdeikis each drilled a pair of 3-pointers in the second half, allowing the Wolverines to steadily pull away. Brazdeikis led the way for U-M with 19 points on 7 of 13 shooting, with Charles Matthews, Poole and Livers providing 17, 11 and 11, respectively. “We started out 1-for-8 from three … I think we shot 40 percent the rest of the way,” Beilein said. “We missed some, we didn’t go into a shell and say ‘I can’t shoot.’ We stepped up and made some really big shots after that.” But at the game’s outset, Michigan looked just as sluggish as it did in underwhelming wins over South Carolina and Western Michigan. The Wolverines struggled to figure out Air Force’s matchup zone defense, producing open looks against the zone but failing to convert as the Falcons (4-7) took a 10-5 lead. “I think the pace of play helped us,” said Air Force coach Dave Pilipovich. “We were able to get some drives and some scores as long as we kept it at a manageable play there in the first half.” Lavelle Scottie scored 16 points on 8-for-13 from the floor for Air Force, getting several baskets at the rim. The Falcons shot 47 percent from the field, but Michigan forced 20 turnovers and recorded five blocks, overwhelming an Air Force team that doesn’t have a player over 6-foot-7. “The game plan was to take away the 3s and turn them over,” Beilein said. “ … We were still able to make sure they had tough shots to make as often as possible. I think they’re 20th in the country in 2-point field goal percentage, we didn’t change any of that. But we made sure they still only scored 50 points.” Added Pilipovich: “A lot of (the 20 turnovers) was Michigan. Their size and their length, their speed.” And behind that size, length, speed and confidence behind the arc, the Wolverines closed out their most impressive performance in three weeks.