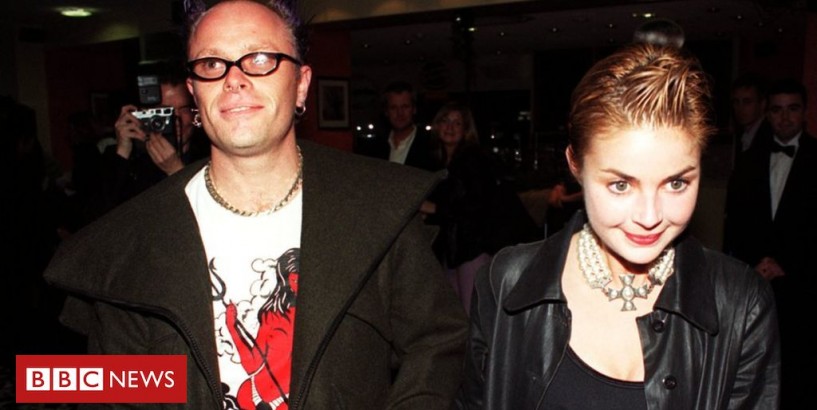 The electro rock star was found dead at his home in Essex last year, aged 49.

The pair were together for two years in the late 90s, at a time when they both heavily under the media spotlight.

"Keith was the love of my life," she said, "I absolutely loved him, I miss him, terrible what happened," she went on.

"I think it was the first time I actually felt like, 'please don't leave me', that kind of love".

Image copyright PA Media Image caption Keith Flint rose to fame with The Prodigy in the 1990s An inquest heard Flint had unspecified amounts of cocaine, alcohol and codeine in his system when he died.

He was known for his fluorescent spiked hair and high-octane delivery of tracks like Breathe and Firestarter - the band's two number one singles.

Porter, meanwhile hosted pop culture entertainment shows like Top of the Pops and The Big Breakfast, and she said she appreciated how their relationship allowed them both to switch off from the pressures of showbiz.

Porter recalled the time they were asked to go to the Maldives with the travel programme Wish You Were Here, and how Flint "had a few issues with a few things".

"A bit of everything," replied Porter, who admitted to having had her own issues.

"So by the time we got to the Maldives, he had a few wobbles but by the end of it, he was swimming every day, we were going to the gym and both of us, our mental health was just so fantastic."

The Prodigy's Keith Flint dies aged 49 Tributes paid a year on from Keith Flint's death The relationship ultimately came to an end after they returned to the UK.

"He was on a downer, I was trying to work my hardest, so it was a shame," said Porter.

Image caption Gail Porter's mental health was the focus of a recent BBC documentary Gail Porter: 'Everyone saw me naked, inside I was breaking' Louis Theroux: 'I needed to give more of myself' Over the years, Porter has had difficulties with conditions like anorexia nervosa, depression and alopecia, and was once sectioned under the Mental Health Act (1983) .

The 49-year-old Scot stressed how the ups and downs of being in the public eye - including having her phone hacked - can have a damaging affect on one's health.

'The invasion is too much' "Obviously there are a lot of people that work in television like new young presenters, I never met [late Love Island presenter] Caroline Flack but she was popular, her love life was in the papers," she told the host.

"Stuff we don't need to know about, that should be private and to see if splashed across a paper, I know a lot of people say well you know what, you are in the media so you kind of signed up for this..."

She added: "When I signed up to be a kid telly presenter, I just thought, 'you know what, I'm just going to make people smile and be happy', and then suddenly the invasion is too much."

Grounded with Louis Theroux is available to listen to on BBC Sounds every Monday and BBC Radio 4 every Wednesday at 20:00 BST.