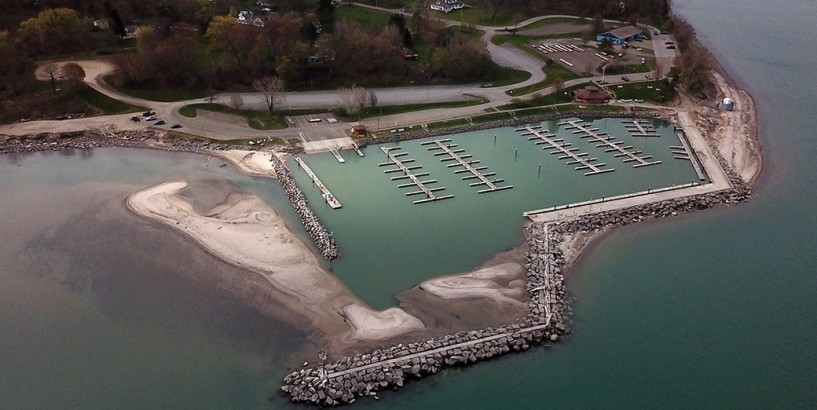 A sandbar rises above the water where boats would normally cruise in and out of Sturgeon Point Marina this time of year.

The opening of the marina depends on getting rid of the sand, and now an offer to dredge it at no cost has been made to the Town of Evans.

The Town Board previously voted 2-1 to reject a $90,000 bid for the dredging. Board members said they worried dredging before the area was inspected might jeopardize a federal grant that would help pay for the dredging.

But if done for free, the town would not have to put in a claim to the Federal Emergency Management Agency, Councilman Michael Schraft said.

The sediment was left from two violent storms in October and February.

"I've never seen it that bad there," said Tom Weber, who usually delivers ice to the marina, which is closed.

Schraft got in touch with two companies and Local 17 of the Operating Engineers union, which offered to dredge the marina for free. He said after the Town Board work session Wednesday that he "pushed the envelope" a bit.

Schraft said the town has the permit from the state Department of Environmental Conservation.

And the Federal Emergency Management Agency said the dredging would not jeopardize claims for other damage at the marina.

The Town Board has been under pressure from anglers, boaters and others to open the marina this year. An online petition garnered 1,900 signatures, and a rally in support of opening was planned for noon Saturday at the marina.

Evans budgeted $50,000 for the annual dredging. But because the October and February storms left so much sand, the low bid came in at $90,000.

Evans Supervisor Mary Hosler said the town expected to be reimbursed for the dredging, but not if the repairs started before a FEMA inspection. The inspection has been delayed by the Covid-19 pandemic.

"At a time like this I can’t be wasteful," Hosler said. "I can't put the taxpayers' money at risk."

Hosler could not be reached Friday to comment on the offer for free dredging.

The president of one of the firms, Spoth Enterprises, is former Town Board Member Jeanne Macko, who lost her bid to unseat Hosler as supervisor last year.

Schraft believes the town should go ahead with dredging and open up the marina to generate income from gasoline sales and slip rentals. He says opening the marina will also help small businesses that rely on the marina for income.

"At least 20-30 small businesses in our town, that are owned and operated here in Evans, will see an overall negative net impact to their business if the marina does not open," he said.

It's also matter of public safety, he said. The Evans Police Marine Rescue and Recovery Unit usually docks its 23-foot rescue boat during the summer at the marina.

"About once a week it gets called out," Schraft said.

The storms also damaged the wall, allowing more sediment than usual into the harbor. Hosler estimates the cost of all the repairs at the marina at $3.2 million. The town is hopeful FEMA will reimburse much of the the cost.

While the marina is closed, the park surrounding it is open and Connors concession stand is set to open Memorial Day weekend.

Fate of Sturgeon Point Marina, Hamburg boat launch up in the air