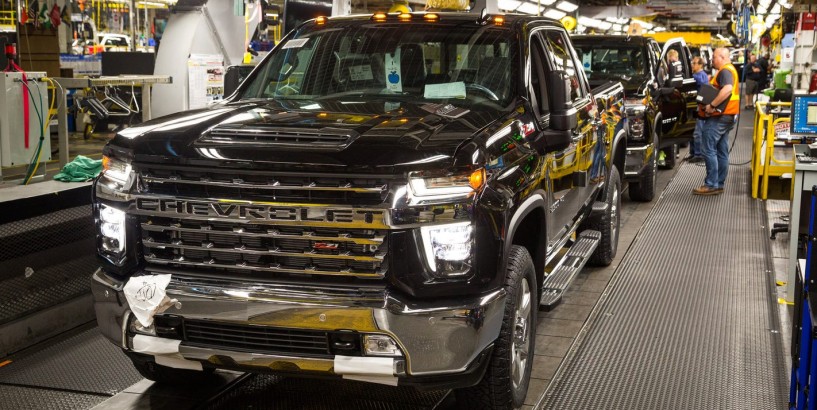 Before sunrise on Monday, tens of thousands of autoworkers will head back to work at factories in Detroit, Chicago, Toledo, Louisville and Kansas City as the Detroit Three start building vehicles again. Shuttered since late March because of the coronavirus, with hourly and salaried workers sheltering at home, cash-starved companies are eager to safely get the lines running. Now the companies are restarting plants throughout North America. "Some people are looking forward to coming back and some people are concerned. It's a balance between the two," said Bernie Ricke, president of UAW Local 600, which represents workers at the Ford Rouge complex. "I think the companies are doing everything they can to protect people's health and safety," he said Sunday, noting that workers at Dearborn Truck will work two 10-hour shifts when they usually work three shifts building the popular Ford F-150 pickup. Ford, General Motors and Fiat Chrysler have implemented new safety protocols that include thermal scanning for high temperatures, daily employee surveys that screen for symptoms, face masks. While the companies say they plan to stagger plant activity, the list of manufacturing factories is staggering. GM spokesman Jim Cain said the above plants will start with one-shift and in total about 12,000 hourly and salaried people will be on the job across the plants starting Tuesday. Previous reports listed GM’s Arlington plant as starting this week, but GM said it will now start later in the month. Cain said the restart at Arlington was pushed back based on timing of expected supplier deliveries but, “it will follow quickly.” Schedules for GM plants in Silao and San Luis Petosi in Mexico are pending, he said. Also opening later this month, the week of May 25, GM’s Bowling Green plant in Kentucky, which builds the Corvette and Corvette engines. FCA's seven plants in Saltillo and Toluca, Mexico, also are scheduled to restart Monday subject to governmental approval for the auto industry. On Tuesday, FCA will open the Brampton Assembly Plant in Brampton, Ontario, Canada and the Windsor Assembly Plant in Ontario, Canada. "Working jointly with the UAW, our employees have worked tirelessly for the past several weeks to implement a comprehensive, multilayered program of enhanced safety measures designed to safeguard our employees," Mark Stewart, chief operating officer, FCA North America, told the Free Press in a prepared statement Sunday. "Progressively restarting our operations will be a welcome sign of getting back to normal and for this reason, every decision we have made about restarting our operations has been focused on putting the health and safety of our employees first," he said. On May 26, FCA will open: Then on June 1, FCA will open its Belvidere Assembly Plant in Belvidere, Illinois, and the Etobicoke Casting Plant in Toronto, Ontario, Canada. Plans to open Ford operations in Mexico remain fluid. The Cuautitlan Stamping and Assembly and the Hermosillo Stamping and Assembly plan to open Monday pending government approval. On Tuesday, the Windsor and Essex Engine Plants in Ontario, Canada open. Later Ford will open the Flat Rock Assembly Plant and Oakville Assembly in Ontario, Canada, on May 26. Kelli Felker, Ford global manufacturing and communications manager, said, "We are looking forward to welcoming our employees back to our facilities with all of the proper safety protocols in place to keep them healthy and safe in the workplace." UAW President Rory Gamble, who has been cautious and concerned about rushing to restart too soon, said Sunday the companies and their workers are ready. The UAW represents an estimated 150,000 members employed by the Detroit Three in the U.S. and Canada. “We would like to thank the many UAW members who have worked so hard throughout the shutdown to keep the plants ready for today, as well as members who have worked to reconfigure plants for the safety of all," Gamble said in prepared remarks. "The UAW will continue to do everything we can to protect the health and safety of all members as plants reopen," he said. "And we will continue to advocate for as much testing as possible and full testing as it becomes available.” Contact Phoebe Wall Howard at 3 13-222-6512 or phoward@freepress.com . Follow her on Twitter @phoebesaid . Sign up for our autos newsletter .