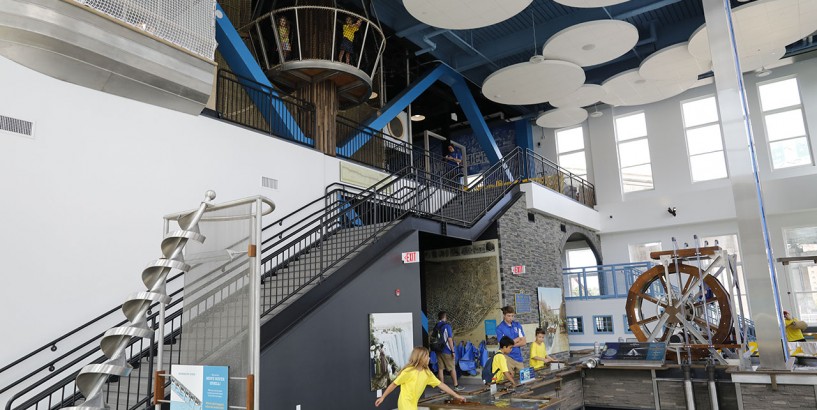 Buffalo is now in the major leagues when it comes to children’s museums. No longer must Western New York families travel to Boston, Philadelphia, Indianapolis or Rochester to find world-class pavilions of play now that the Explore & More Ralph C. Wilson Jr. Children’s Museum has opened its doors.

Families braving the crowds at Canalside this weekend, whether gazing at tall ships or just out for a summer stroll, can take refuge inside the climate-controlled walls of the $29 million museum.

The photo opportunities afforded by the building’s panoramic views are alone worth the price of admission. On the ground level, the Low Bridge Cafe and Celebration Room give way to scenic looks at the water. An expansive look at all of Canalside and the nearby water is found on the museum’s rooftop.

Families will appreciate how the museum painlessly integrates history lessons into its interactive exhibitions and seven play zones. The Being Good Neighbors area teaches about our region’s diverse ethnic heritage, with examples of Yemeni, Puerto Rican and Seneca Nation culture.

The history of the Erie Canal, including lessons about locks and how electricity is produced, comes to life in the Moving Water area.

This being Buffalo, sports also get their place in the sun. The Playing Together zone is dedicated to letting kids get a taste of playing for a Buffalo sports team, including wearing the uniform. There is a miniature Jumbotron and depictions of Memorial Auditorium, the former home of the Buffalo Sabres and Buffalo Braves that once stood on the site occupied by the museum.

Playing Together is sure to be a favorite gathering spot for adults, some of whom might be looking to take a break from helping their progeny milk a plastic cow or power an electric light.

The history of the Erie Canal Harbor, terminus of the canal that moved goods and passengers from the East Coast across the Great Lakes after its creation in the early 19th century, is well-represented. There’s even a packet boat, accompanied by stories of youngsters who worked on the canal.

Explore & More has come a long way from its modest beginnings in a 5,000-square foot space in East Aurora, where it opened in 1994. The planned move to Canalside was announced in 2012, and the 43,000-square-foot museum finally opened in June.

The Erie Canal played a vital role in the spread of commerce to the American West. Explore & More may not get its page in American history books, but it can serve as another catalyst in Buffalo’s economic rebirth, providing further evidence that projects that were unimaginable here a decade ago are now coming to fruition.