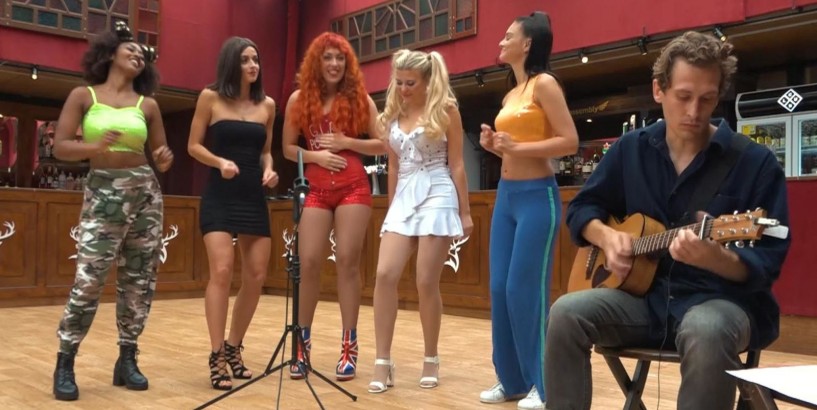 Given how much our lives have changed in the last three decades, it is strange that so many of us are getting misty-eyed thinking about things such as dial-up internet.

He said: "Everyone who grew up with 90s music has now reached that age and are keen to relive the nostalgia of their youth, basically."

Image: The Spice Girls originally found fame in the 1990s Brinkler insists the show, which has been touring for two years, has gone from playing to audiences of "a few hundred" to one concert recently that saw the girls play to "100,000 people".

Advertisement Melissa Potts, who performs as Posh, said: "There's just something about the Spice Girls, girl power, you just can't touch it."

90s nostalgia is the theme of Daniel Nicholas' comedy quiz show. He isn't convinced the grass was greener. In fact, he believes, there are lessons to be learned from the past.

More from Ents & Arts Rapper A$AP Rocky released from Swedish jail ahead of assault verdict Ed Sheeran breaks U2's record for highest grossing tour of all time R Kelly pleads not guilty to sex trafficking charges David Bowie, Freddie Mercury, Beyonce: Photographer Denis O'Regan shares his archive Katy Perry and team ordered to pay £2.3m for copying song for Dark Horse hit Climate crisis takes centre stage at Edinburgh Fringe He said: "History repeats itself if you're not careful. While you can have this nostalgia for the past it has to have a critical lens on it, otherwise you are just romanticising it and you're likely to make the same mistakes again."

How about the one where the TV show Friends is a musical? Few could have predicted Ross and Rachel's love affair would be one of the most streamed shows on Netflix 30 years on, let alone fodder for an Edinburgh show.

Jamie Lee-Morgan, who plays Ross, said fans who come to watch the musical are desperate for more episodes.

"Because there hasn't been anything new since Friends finished, I feel like people have been dying for something else and it's hard to believe that this is the first-ever Friends musical parody."