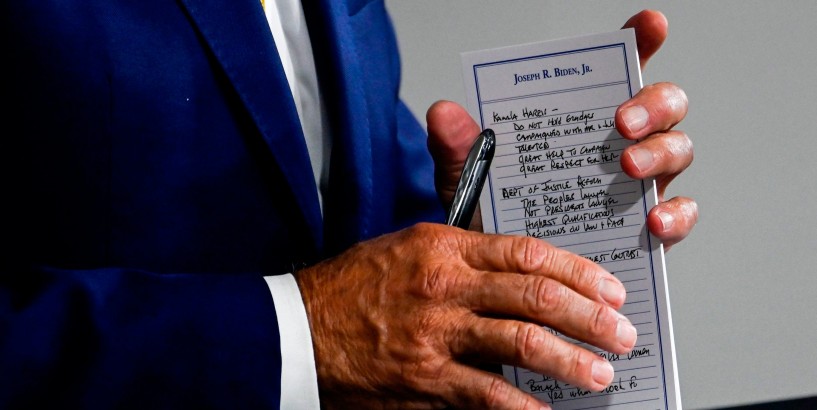 WASHINGTON – Former Vice President Joe Biden, the presumptive Democratic nominee, was captured Tuesday holding a note with Sen. Kamala Harris' name printed across the top with talking points, including, "Do not hold grudges." The other talking points about Harris were: “Campaigned with me & Jill.” “Talented.” “Great help to campaign.” “Great respect for her.” Harris, D-Calif., was a Biden rival when she was running her own campaign for president but has since emerged as a top contender for the vice presidency. The does "not hold grudges" talking point may be reference to the clash between the two at the first Democratic debate, when the former California attorney general went after Biden, who was considered the front-runner for most of 2019, on his civil rights record. Harris challenged Biden over remarks he made at a fundraiser in which he touted his past successes working with Republicans to get legislation passed, citing his ability to work with segregationist Sens. James Eastland and Herman Talmadge. "It was hurtful to hear you talk about the reputations of two United States senators who built their reputations and careers on segregation of race in this country," Harris, who is African-American, told Biden during the debate. She went on to criticize his opposition to school busing in the 1970s, telling the story of a girl in California who was part of just the second integrated class in her school. "That little girl is me," Harris said in a moment that went viral. She enjoyed a short-lived bump in the polls from the moment but according to some outlets, other Democrats have been lobbying against her for the vice presidency in part because of lack of trust following that moment. According to POLITICO , former Sen. Chris Dodd, who is a member of Biden’s vice presidential search committee, was stunned by Harris' attack, reportedly saying, “She laughed and said, ‘that’s politics.’ She had no remorse." Those comments have drawn criticism, especially from Democratic women, who say Harris is being held to a standard that wouldn’t apply to a man. Since that moment, the relationship between Biden and Harris has become considerably more friendly, with Harris passionately endors ing Biden for the presidency, and becoming a surrogate for his campaign by appearing and headlining virtual fundraisers and events. As reflected in his notes, Biden has made similar comments in the past about Harris, saying in December "of course" he would consider her to be his running-mate and that she "has the capacity to be anything she wants to be. I mean it sincerely." "She is solid. She can be president someday herself. She can be the vice president. She can go on to be a Supreme Court justice. She can be an attorney general. I mean, she has enormous capability," he continued. The presumptive nominee has also noted that he’s thought highly of her since she became close to Beau Biden, the former vice president's late son, when they were both Democratic state attorneys general together. Biden's choice has been closely monitored because he has committed to choosing a woman. But key Democratic activists have urged him to choose a Black woman in order to build enthusiasm among voters of color and younger progressives. Biden said Tuesday he would choose his running-mate the first week of August. The note was captured by a photographer with the Associated Press as Biden took questions from reporters Tuesday. Contributing: The Associated Press; William Cummings, Bart Jansen, Nicholas Wu, USA TODAY