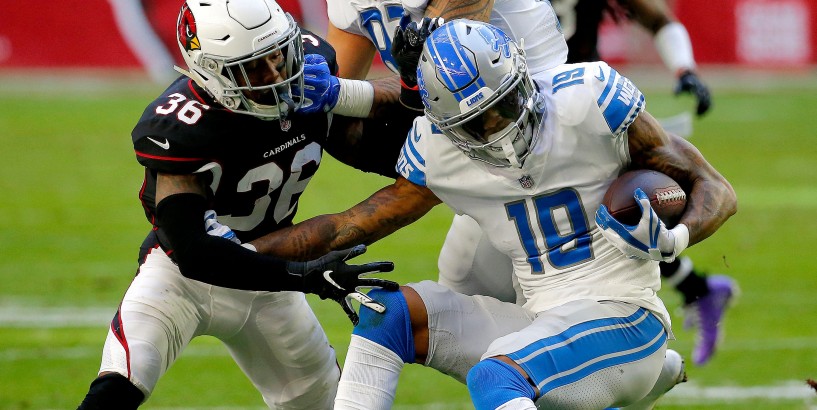 Free Press sports writer Dave Birkett breaks down the Detroit Lions' Week 1 road game against the Arizona Cardinals : We don’t know much about the Lions’ offense, but we do know new coordinator Darrell Bevell wants to run the ball. Bevell had some of the league’s best running games in his previous stops as play caller, at Minnesota and Seattle, and he should feature Kerryon Johnson heavily this season. Johnson averaged 5.4 yards per carry last year, second best in the NFL, but he missed a December game against the Cardinals, when the Lions ran for 122 yards, because of a knee injury. Johnson insists he’s healthy now, and the Lions will complement him with C.J. Anderson and perhaps give rookie Ty Johnson a small role, too. The Cardinals finished last in the league in both rushing yards (154.9 yards per game) and touchdowns (25) allowed last season, and while they overhauled their personnel this spring they’re still far from an elite run-stopping unit. Edge: Lions As bad as the Cardinals are at stopping the run, they might be even worse right now against the pass. Top cornerback Patrick Peterson starts his six-game suspension Monday and No. 2 corner Robert Alford is out with a broken leg. Rookie second-round pick Byron Murphy is Arizona’s best cover man, and he’s yet to play an NFL game. The Lions will play things safe with their West Coast offense, but there’s no reason not to take a few shots downfield Sunday given the Cardinals’ problems in the secondary. Kenny Golladay is a tough cover for good cornerbacks, and the Lions have a much-improved tight end room led by first-round pick T.J. Hockenson. Matthew Stafford is coming off a down year at quarterback and attempted just 19 passes this preseason. He’ll need to knock some rust off but should have a big day against maybe the worst defense in the league. Edge: Lions New Cardinals coach Kliff Kingsbury is bringing his Air Raid offense to the NFL and there’s plenty of mystery about what it will look like. The Cardinals want to spread teams first horizontally, then vertically, and open holes in the middle of the field with their three- and four-receiver sets. In theory, that could lead to big things for running back David Johnson and rookie quarterback Kyler Murray. Johnson is a one-cut runner and one of the best receiving backs in the game, while Murray is an athletic marvel who has to be accounted for on dropbacks and zone-read plays. As problematic as the Cardinals offense might be, the Lions have one of the best run defenses in the NFL. Damon Harrison demands double teams up front, and Trey Flowers is relentless player on the edge. The Lions probably will be without middle linebacker Jarrad Davis on Sunday, and Flowers didn’t play at all in the preseason coming off shoulder surgery. But if there’s one thing this defense can do it’s stop the run. Edge: Lions Murray completed 64% of his passes in the preseason, but he averaged just 5.4 yards per attempt. That’s an incredibly tiny number by NFL standards, and if that continues in the regular season the Cardinals won’t go anywhere on offense. Arizona has a veteran receiving corps led by the ageless Larry Fitzgerald and the newly signed Michael Crabtree, but second-year pro Christian Kirk is the Cardinals’ best pass catcher. He had just three drops on 68 targets last season, according to PlayerProfiler.com , and is electric in the open field. The Lions have three new starters in a secondary that was among the worst in the league at forcing turnovers last year. Rashaan Melvin is questionable to play Sunday because of a knee injury, but Justin Coleman and Tracy Walker will be in the lineup. Darius Slay could shadow Kirk on the outside, but the Lions will have to be careful about their rush plans with the slippery Murray behind center. Edge: Lions The Lions have one of the more reliable kicking games in the NFL. Matt Prater made 28 of 32 field goals last season and has coach Matt Patricia’s trust just about anywhere on the plus side of the field. Sam Martin hasn’t been quite as consistent punting the last two seasons, but the Lions should have improved coverage units after struggling in that department early last year. Jamal Agnew projects as the Lions’ punt return man, and rookie Ty Johnson has the speed to handle kicks. Zane Gonzalez was 6-for-6 on field goals this preseason for the Cardinals, who have middle-of-the-pack special teams overall. Andy Lee, in his 16th NFL season, netted nearly 43 yards per punt last season, and the Cardinals have two solid gunners in ex-Lions safety Charles Washington and wide receiver Trent Sherfield. To beat the Lions, the Cardinals might need a big play or two from their return game. Edge: Lions I gave the Lions the edge in all five of these matchup categories, so it shouldn’t come as a surprise I’m picking them to win this game. There’s plenty of unknown about Murray, and he’s talented enough to make a few “wow” plays and probably keep this game close. But the Cardinals are one of the thinnest and least-talented NFL teams overall, and their questions on defense are pronounced. As long as the Lions avoid penalties and turnovers, they should start the season on the right foot. Pick: Lions 28, Cardinals 14 Contact Dave Birkett at dbirkett@freepress.com . Follow him on Twitter @davebirkett. Read more on the Detroit Lions and sign up for our Lions newsletter .