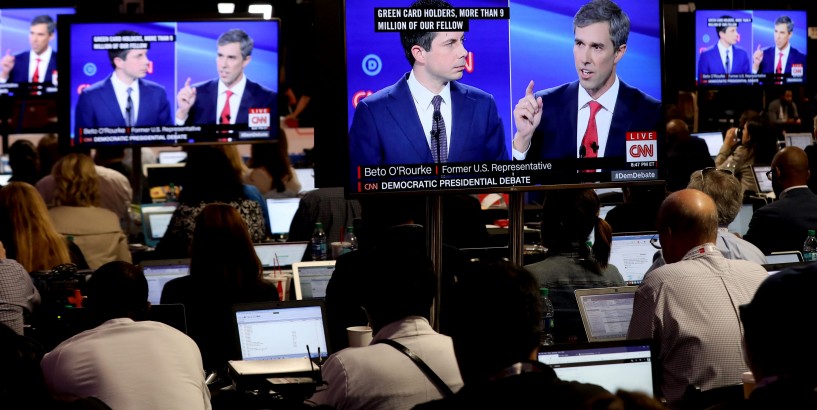 Ten Democrats enter, 10 Democrats leave: The first night of Democratic debates in Detroit didn't move the needle much, Freep columnists Brian Dickerson, Nancy Kaffer and Kim Trent say. Ten of the 20 Democratic candidates debating this week appeared Tuesday night: U.S. Sen. Bernie Sanders, I-Vermont; U.S. Sen. Elizabeth Warren, D-Massachusetts; South Bend Mayor Pete Buttigieg; former U.S. Rep. Beto O'Rourke, D-Texas; U.S. Sen. Amy Klobuchar, D-Minnesota. Montana Gov. Steve Bullock; former U.S. Rep. John Delaney, D-Maryland; former Colorado Gov. John Hickenlooper, U.S. Rep. Tim Ryan, D-Ohio; author Marianne Williamson. The remaining 10 candidates will debate Wednesday night. What else did our trio of pundits think? Round Two, Night One in single headline: NANCY: "Eh." KIM: "Moderates take aim at progressives’ big ideas" BRIAN: "Moderates take on Medicare-for-all front-runners" Candidate who did most to help him/herself with Michigan voters (and how): NANCY: Candidates willing to engage with questions about racial injustice — Warren, Buttigieg, O'Rourke. Turning out voters in majority African-American, majority Democratic Detroit will be key to winning Michigan. KIM: Ryan had the most specific plans to address the loss of manufacturing jobs with progressive ideas like building a green economy infrastructure. BRIAN: Buttigieg could win a Michigan gubernatorial race with the presidential platform he's articulated. Most improved, compared to Round One in Miami (and why): NANCY: Delaney. He got to talk! And he articulated the misgivings a lot of folks have about how Medicare For All — even people who believe health care is a human right — would be implemented, and how private insurance could or would be made illegal. I don't know that it gives him a serious shot, but I think it extends his candidacy. KIM: John Delaney broke through with pithy statements like warning against Dems becoming the party of subtraction on health care. He did the best job of framing skepticism about Warren and Sanders’ big ideas. BRIAN: I'm a third for Delaney. Best response of evening: NANCY: It's a toss up: "I wrote the damn bill!" — Sanders, in response to a critique of the particulars of Medicare For All, or Warren, to Delaney: "I don’t understand why anybody goes to the trouble of running for president of the United States just to say all the things we can’t do and shouldn’t fight for." KIM: Warren's, same Quote: . BRIAN: Buttigieg on Republicans: "It's time to stop worrying about what the Republicans will say. It's true that if we embrace a far left agenda, they're going to say we're a bunch of crazy socialists. If we embrace a conservative agenda, you know what they're going to do? They're going to say we're a bunch of crazy socialists. Let's stand up for the right policy, go up there and defend it." Weirdest moment: NANCY: Listening to Marianne Williamson is like listening to Bernadette Peters. KIM: The vocal track was off by about a second in the last half of the debate. I felt like I was watching a spaghetti western. BRIAN: Sanders doing a caricature of Bernie in response to Hickenlooper's caricature of Bernie waving his arms. Who should drop out Wednesday morning (and why)? NANCY: Hickenlooper. He should run for the U.S. Senate. ProbablyO'Rourke, ditto. KIM: Sanders, although I know he won't. I just don't think he's connecting. BRIAN: Hickenlooper, O'Rourke, Ryan. Others are representing their constituencies more effectively. Which five candidates should go on to the next round? NANCY: Warren, Buttigieg, Delaney ... do I have to pick five? Those three most thoughtfully articulated policy perspectives, and engaged in something like a real debate. KIM: Buttigieg is earnest and smart. A great counterpoint to Trump’s impulsiveness. Bullock: I’d like to hear more from a self-described progressive who has won in red country. Warren has the best articulated and most specific progressive plans. Ryan has the most specific plans to boost manufacturing. O’Rourke supports bold ideas like reparations. BRIAN: Warren, Sanders, Buttigieg, because they've earned it. Klobuchar, because her record and experience deserve a more serious format. Williamson, because she makes it more interesting. Brian Dickerson is Editorial Page Editor of the Detroit Free Press. Contact: bdickerson@freepress.com. Nancy Kaffer is a Free Press columnist. Contact: nkaffer@freepress.com. Kim Trent was elected to an eight-year term on the Wayne State University Board of Governors in 2012. She previously served as the director of former Gov. Jennifer M. Granholm's southeast Michigan office.