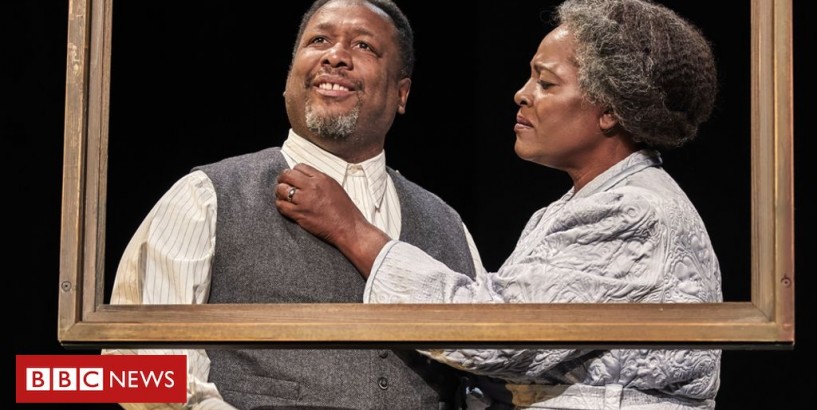 Death of a Salesman: How Arthur Miller's play was was 'turned on its head'

While you can generally rely on reboots to deliver at the box office, it can be difficult to leave audiences feeling like they've gone home seeing a new and distinctive take on something.

The chances are, many theatregoers will have already read Arthur Miller's 1949 play Death of a Salesman in high school, or seen one of several earlier productions of it on the stage.

But there's a notable difference in the latest production, which has just transferred from the Young Vic to the Piccadilly Theatre in London's West End.

"Turning this story on its head by having an African-American family in the role, for me, deepens what Arthur Miller's done," says actress Sharon D Clarke, who plays Linda Loman.

"There's no point in the show that we change any words, everything is exactly as Arthur Miller wrote it, but with an African-American family, all those themes seemed more heightened. It helps you see the text afresh.

"Willy Loman in 1949 has a mortgage, has a car. By the trappings of the American dream, he would seem to be doing very well, but he is a black man. And we are a long way away from President Obama, so the glass ceiling which is there for him is ever so real."

This isn't the first time co-director Marianne Elliott has challenged the way certain roles are cast in a theatre production. Last year, she was behind the Olivier-winning production of Steven Sondheim's Company, which put a female character in the lead role instead of the male it had been written as.

Image copyright Getty Images Image caption Co-director Marianne Elliott (left) has previously directed the Olivier-winning Company This production of Death of A Salesman follows the so-called "colour-blind casting" in The Personal History of David Copperfield, which stars Dev Patel in the lead role and premiered at the Toronto Film Festival last month.

The role of Willy Loman is taken in this production by Wendell Pierce, well known to US TV fans for shows like Suits and The Wire.

The new interpretation adds themes of racism to the original text. Pierce highlights one scene, for example, in which Happy Loman is asked if he'd be more comfortable in a different area of a restaurant, a question which takes on a new meaning when being directed at black characters in the 1940s.

However, in his review, Chris Omaweng of the LondonTheatre1 website , pointed out that the casting presents one or two issues, writing: "It's not exactly a watertight storyline, when one considers the racism of the era. What on earth is Willy doing having an affair with a white woman in Boston, Massachusetts, given that the play is set in the late 1940s?

"Surely neither party would be so stupid, and to borrow a line from an earlier scene, 'attention must be paid' to such matters - we're talking about an area were desegregation of school buses wasn't completed until the late 1980s."

Pierce, however, says the African-American cast largely "illuminates" Miller's text. "This interpretation is not in competition with the conflicts and all the themes [Miller] put in the play, it actually works in concert with it."

Image copyright Getty Images Image caption Wendell Pierce's co-star from The Wire, Dominic West, attended the play's opening night on Monday At Monday's opening night, Pierce looked emotional as the audience rose to their feet for a lengthy round of applause.

"That curtain call was overwhelming," Pierce said after the show. "I have waited for this night for over 40 years. It was cathartic, it was surreal, I remember when I was this young lad who came to London decades ago, and said 'maybe one day', and that day has arrived."

He adds that a Miller play may not be the kind of thing those familiar with his work would normally come and see, but that's one of the reasons he was keen to do it. Pierce notes the fans he's met in London in recent weeks have been a "real mixture" of Suits and The Wire fans.

'Crisis of masculinity' "What happens is, people say 'what are you doing here?' and they don't know about the play. So they say 'can I take a picture or have an autograph?' and I say 'only if you come to the play'. So hopefully we'll be bringing people to the theatre that normally don't go."

When this production first premiered at the Young Vic in May, it was warmly welcomed by critics.

"We've seen many good productions of Death of a Salesman over the years," wrote Michael Billington in The Guardian. "This one, mixing the socially specific and the dreamily phantasmagoric, depicts the duality at the heart of Miller's memory-play with exceptional clarity."

"The notion of a crisis of masculinity may be very 2019, but this production reminds us that Miller was staging it 70 years ago," added The Independent's Holly Williams.

"Every character is broken by his need to perform a damaging maleness: making money, getting to the top, showing no weakness. One of the sadnesses of this play is that this absurd way of valuing a man's life, a man's worth, still feels painfully resonant."

Image copyright Brinkhoff/Mogenburg Image caption Sharon D Clarke previously starred in Caroline or Change, which also transferred to the West End last year Anthony Walker-Cook of Broadway World said the production "remains one of the standout shows of the year" after its transfer to the West End.

"If one thing is lost in the transfer, however, it is the intimacy shared between the audience and the Lomans due to the Young Vic's smaller stature. Femi Temowo's gentle music and Clarke's musical laments of sadness are somewhat lost in the auditorium of the Piccadilly Theatre, though they are no less moving."

Speaking to BBC News, Elliott acknowledges: "Because it's such beautiful writing and so nuanced, you do worry that will get lost, because it's such a big house, there's 1,200 people in the theatre. So the actors have to be very adept at being able to resonate with the whole building. But they work so hard that they haven't stopped until they found their way."

The director adds her tendency to take audiences by surprise with casting is not something she did intentionally.

"It wasn't meant to be a theme," Elliott laughs, "it was just coincidental that Company was the one before this. I do think, though, that theatre should be exciting, and therefore you have to constantly try and change people's expectations, so if you can surprise them then that's all the better."