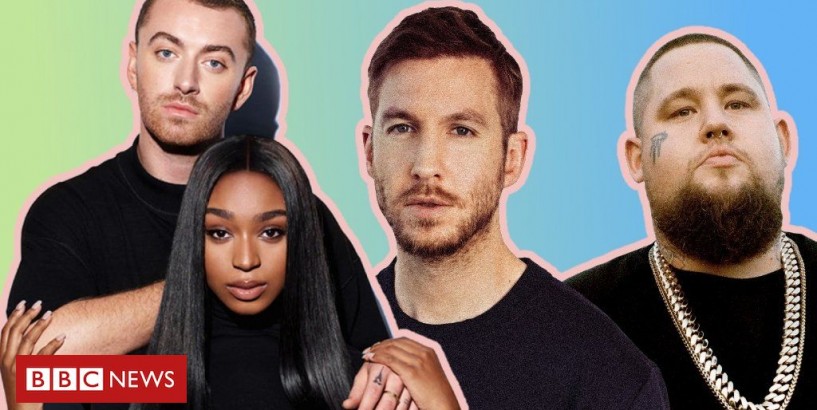 Like the majority of his 39 chart hits, it featured a guest vocal - in this case from gravel-voiced blues singer Rag 'N' Bone Man.

The Scottish producer has previously collaborated with Rihanna, Dua Lipa and Dizzee Rascal, and the music industry is increasingly following his formula.

Collaborations accounted for 40% of radio's most-played songs in 2018.

It said that four most popular songs on UK radio last year featured two or more artists, including Sam Smith and Normani's duet Dancing With A Stranger and Ed Sheeran and Justin Bieber's summer anthem I Don't Care.

So why are musicians teaming up so often? There are several reasons.

First of all, the way that artists are credited has changed. When Michael Jackson roped in Eddie Van Halen to play the guitar solo on Beat It, his name didn't appear on the front sleeve or the disc itself. By the time he released Give In To Me in 1991, Slash not only had his photo on the cover, but he received a "featuring" credit on the charts.

That practice has only accelerated as hip-hop, traditionally the most collaborative branch of music, has become the world's most-listened to genre.

The side-effect is that collaborations can bring new audiences to an existing song. That's why Doja Cat's smash hit Say So has recently been re-recorded with a guest verse from Nicki Minaj; and Megan Thee Stallion's Savage now comes with added Beyoncé.

Staggering the release of these remixes also helps a song sustain its presence on the charts and popular streaming playlists - making more money for the artists concerned.

His latest album, the No. 6 Collaborations Project, featured no fewer than 22 other artists, from Eminem and Stormzy to Chris Stapleton and Bruno Mars.

He has now topped the UK's airplay chart four times in the last five years - with Coldplay briefly breaking his run in 2016.

The charts were revealed as part of its annual report, which announced that the society had collected £271.8 million on behalf of 108,000 performers and rights holders over the last year.