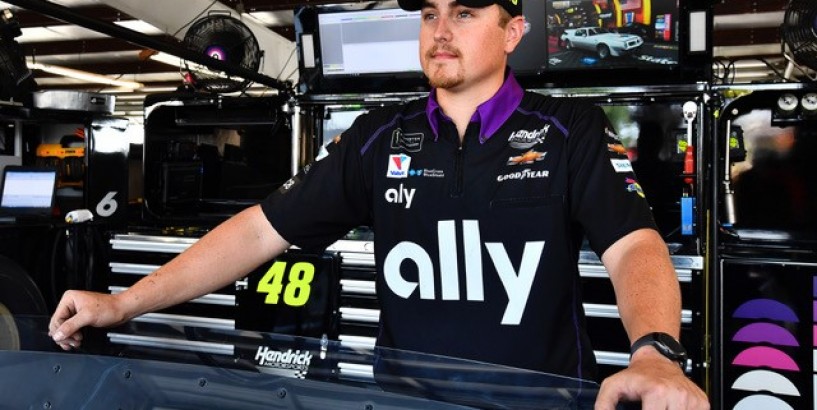 WATKINS GLEN — When seven-time Monster Energy NASCAR Cup Series champion Jimmie Johnson continued his bid to make the playoffs at Watkins Glen International this weekend, he relied on his supporting cast in the garage and on pit road to enhance his chances for a solid result in Sunday's Go Bowling at The Glen race.

One of those cast members was Thomas Heslink, a native of Clymer. Heslink serves as an "underneath mechanic" for the Hendrick Motorsports No. 48 Ally Chevrolet, which Johnson drove to a 19th-place finish in the Go Bowling at The Glen 90-lap race Sunday.

For the fifth consecutive year, the race was run before a sold out reserve grandstand crowd.

Johnson, who started Sunday's race from the eighth position, arrived at The Glen 17th in points, just 12 out of the final playoff spot.

With Sunday's result, Johnson exits The Glen in a tie with Ryan Newman for the 16th and final NASCAR playoff spot. Based on the tiebreaker procedure, Johnson has a stage win this season and Newman does not, so Johnson currently holds the 16th spot with Newman 17th.

Following the 26-race regular season, only the top 16 drivers in points make the final 10 race NASCAR playoffs. The Glen was the 22nd race of the 2019 regular season. Johnson, who is winless in 2019, has recorded just three-top five finishes.

"Well we were out of a playoff spot when the weekend here began and our expectations are that we need to be in it," Heslink said. "A lot happened with us today and we still pulled out a pretty good points day. All I did today was keep working hard. I'm glad I was able to help my team today in the standings."

Johnson settled into fifth at the drop of the green flag. He finished Stage One on lap 20 in sixth, gaining five stage points. At the conclusion of Stage 2 on lap 40, Johnson found himself in 10th, earning a single stage point.

With 37 laps to go and Newman having troubles running 35th and Johnson 18th, Johnson at that moment was in the playoffs by 12 points.

With 29 laps to go, however, Johnson suffered a spinout and hit the wall in an incident that Heslink blamed on Ryan Blaney. During the caution that ensued, Johnson came to pit road and Heslink and his teammates feverishly handed tools to pit crew members, who made hasty repairs. Johnson restarted in the 27th spot and scrambled to his finish at the checkered flag.

"We were trying to play some strategy right there in the second stage and going into the last one," Heslink said. "There was a guy who had fresher tires and just dumped us going into the carousel and ruined our day. It was the No 12 (Blaney) who did it. The damage to our car was actually pretty minimal. I just tried to help the guys that were over the wall by giving them the tools to repair the car."

Heslink, 28, who now resides in Concord, NC., grew up in Clymer and graduated from Clymer Central High School in 2009 . He was well involved with the Western New York Southern Tier racing scene. Heslink attended races at Stateline Speedway in Busti and Little Valley Speedway as well as Pennsylvania-based Eriez Speedway and McKean County Raceway and Ohio's Raceway 7.

"I grew up around the local dirt tracks in my area and worked on Brent Rhebergen's Super Late Model and, from there, after high school I went to the University of Northwestern Ohio," Heslink said. "I got my associate's degree in automotive mechanics and high performance technology and while I went there, it was my dream to do this, but I never thought it would come to fruition. I went there just to get my degree and go back home and go racing on the weekends.

"I ended up getting an internship on a NASCAR K&N Pro Series East team and that was my introduction to working within NASCAR. I did a one-year internship with them and this led to doing another internship with an ARCA team, Win-Tron Racing. After I graduated from college in 2013, I moved to North Carolina and volunteered myself for three or four months for nothing. I just worked at Win-Tron in the shop doing what I had to do. That led to me getting my first real job in the NASCAR Truck series in 2014 with Win-Tron Racing."

When that season ended, Heslink worked one year with Billy Boat Motorsports in the Trucks series, but the organization closed at the end of the year.

"I was out of work for almost two months," Heslink said. "I went to work at my buddy's body shop, trying to get along. I was really waiting for the right kind of opportunity."

Heslink was determined, prepared and ready when a phone call led to his career turning in good fortune.

"I then got an opportunity to go to work for ThorSport Racing in Sandusky, Ohio, as a car chief and that really was my big breakthrough for me and my career," Heslink said. "I was there for three years, 2016, 2017 and 2018. Last year in September, I ended up getting a call from the Hendrick No. 48 car chief Jesse Saunders. He was a buddy with the car chief at ThorSport. They got me hooked together. It was really lucky circumstances that they needed someone and I was ready to move down there. It was a huge step and I had to take it."

This weekend here at The Glen, Heslink was busy preparing the very familiar No. 48 Chevy.

"I am responsible for basically everything on the underside of the car," Heslink said. "I concentrate on mainly the rear suspension but it's everything from the transmission back to the fuel cell. Then during the race, I do pit crew support and help the pit crew from behind the wall with the pit stops. I do whatever I can do during the race to make the over-the-wall pit crew jobs easier. Obviously, if the car gets any damage and the car has to go to the garage for repairs, that's under my responsibility."

Coming into the weekend, many experts figured that it could be hard for Johnson to gain ground in the playoff race as Watkins Glen has not been one of Johnson's better tracks during his long and successful career.

Johnson's average career Cup Series Watkins Glen finish prior to Sunday's race was 17.06, while his average race start position was 7.9. His best Cup Series career finishes at The Glen are a pair of third-place runs achieved in 2007 and 2012.

"It's been a bit different this weekend working with Cliff now," Heslink said. "He was born a racer. He's very smart. He's been the lead engineer for us and he knows what's going on. It's obvious this weekend that he is very detailed oriented and has a good attitude and is a good leader.

"I believe that Hendrick Motorsports as a whole is the best team in the garage and a great company to work for. This is the cream of the crop. I'm glad to be here."