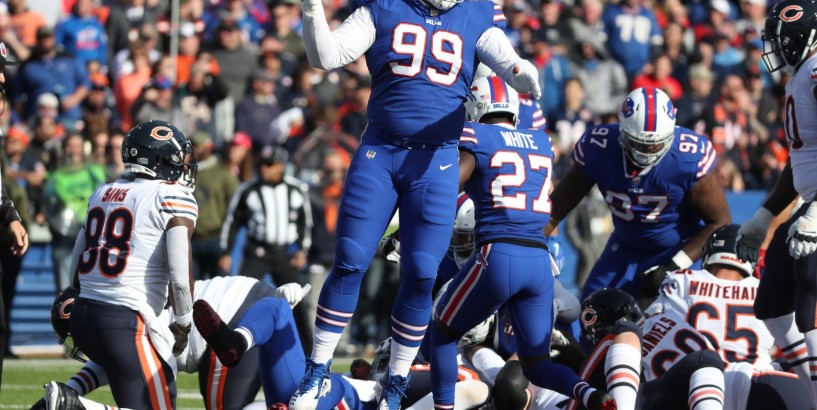 Bills rookie Harrison Phillips learns to stop comparing himself to others

The Buffalo Bills’ rookie defensive tackle won three state championships as a high school wrestler. He was named the 2013 Nebraska Gatorade Player of the Year in football. He led Stanford in tackles from the interior as a junior, graduated early with a double major, then bench-pressed 225 pounds 42 times at the Combine, the most by any player at any position at the event.

He was always better than everyone else. And yet one of the most important things Phillips said he’s learned in his rookie season with the Buffalo Bills?

To quit comparing himself to others.

“Part of rookie year has been learning to stop comparing myself to other people and just compare myself to my previous games,” Phillips said after practice Wednesday, but he conceded that’s easier said than done.

“I think everyone’s nature is to look at other people and their position, or other people’s statistics or playing time and stuff like that. But I’m just learning to trust the process, one of the big things that we do, as I grow.”

Phillips continues to adjust to the NFL since the Bills drafted him with the 96th overall pick in the third round, the 10th defensive tackle off the board. He’s appeared in all 13 games this season, recording 25 tackles, four for loss, a quarterback hit and a fumble recovery.

But the 6-foot-3, 307-pound lineman has proved himself a consistent and valuable contributor to the Bills’ defensive rotation.

“He has,” coach Sean McDermott said. “He’s probably not real fancy. He stays under the radar in terms of off the field and on the field, but you’ve heard me say before, the unselfishness of that defensive tackle position is key to freeing other people up to make plays, and he certainly embodies that DNA. “

Pro Football Focus ranks Phillips sixth overall of 13 rookie interior defensive linemen who have played at least 20 percent of their team’s defensive snaps. He’s sixth against the run, and his six quarterback pressures rank 12th against the pass.

Of course, he was never comparing himself with those players.

He was looking at his teammates, particularly veteran defensive tackle Kyle Williams.

“He was instrumental in me not comparing myself to other players as much,” Phillips said. “We had so many comparisons to one another as I got drafted here and through camp. He helped me realize that I’m my own player and find my strengths and find my weaknesses and work on those.”

He also credits Williams with helping him understand “offensive structure.”

"There’s thousands of things that go into a football game each week, but the smarter I can become, understanding what offensive coordinators are thinking and how those offenses are built, the better I can become and anticipate what plays I’m going to see.”

Phillips has played 39 percent of the team’s defensive snaps this season, averaging nearly 25 snaps per game.

That’s in stark contrast to his playing time at Stanford, where he played nearly every down.

One of his top individual goals is for the coaches to trust him to rush the quarterback on third downs.

“The way our packages go, we have a third-down group,” Phillips said. “And I want to get on that somehow, some way, shape or form. That’s been a goal of mine for a while now. And that starts with earning the right on first and second down, so affecting the quarterback in that role.

“It’s really hard sometimes on first and second down. Typically, those passes are either coming out quick or they’re max protection and I’m getting double-teamed most of the time. So it’s hard to create a pressure or affect the quarterback in some way, but … the more effect I can have on the quarterback on first and second down, the more of a right I’d earn to rush on third down.”

But Phillips credits the Bills’ defensive rotation as one of the reasons why he feels way better in Week 15 of his first NFL season than he ever did after a season at Stanford.

“The whole ‘rookie wall’ thing never came and I don’t anticipate it coming,” Phillips said. “I feel like I’ve got a lot more games I can still play in, and I think that’s thanks to the rotation and the coaches and our trainers, our strength coaches, everybody making it feel so our bodies are in good shape right now. We only have three weeks (remaining in the season), but even if we had another seven or eight or however many it takes to get to the Super Bowl, I feel like I definitely have that in me. It’s been a fun year, and I feel like I’m going to take full advantage of every opportunity that we have, regardless of how fast or fleeting or how many that come.”